Home Issue 10 Our bushfire fighting: Up in the air?
Issue 10Volume 25

Our bushfire fighting: Up in the air?

Large aircraft used for “water bombing” bushfires. They are part of a national pool, the National Aerial Firefighting Centre, from which states can draw. The NT Government is not participating, at least not in a way that could have assisted in fighting the West Macs fire.

There are no contracted fixed wing water bombers for fire fighting in Central Australia, according to Joshua Fischer, of Bushfires NT.

In time-honoured Berrimah Line style, there are some in the Top End.

And so 58% of the West MacDonnell ranges, Central Australia’s most valuable tourism asset, sustained serious damage while the tool used extensively to fight the Tasmanian fires, at roughly the same time, remained out of reach.

The fleet of the National Aerial Firefighting Centre (NAFC) includes some 143 aircraft “contracted by NAFC on behalf of State and Territory governments, supplemented by additional state owned, state contracted aircraft and other aircraft hired to meet peak demand across Australia”. The large planes are these:–

The devastating West Macs fire in January started 55 km from Alice Springs, according to Mr Fischer.

That is some six minutes flying time from the Alice airport.

At its furthest distance, Mount Sonder, the flying time would have been less than 20 minutes.

Of course, as the aircraft would have had to be ferried from Melbourne or Sydney, the cost would have been substantial.

But while the Tasmanian Government clearly bore that cost to save its national and World Heritage treasure, Bushfires NT did not have the budget to even consider it.

At best, the use of big air tankers in the West Macs would have extinguished the blaze in a day or two: Aircraft would have had easy access to places that could not be reached by fire fighters on the ground because they could not get vehicles there.

As it turned out, the fire burned for 17 days, despite 80 fire fighters battling heroically in horrendous temperatures.

And hot on the heels of the West Macs fire, part of the Uluru national park had to be closed because of fire. 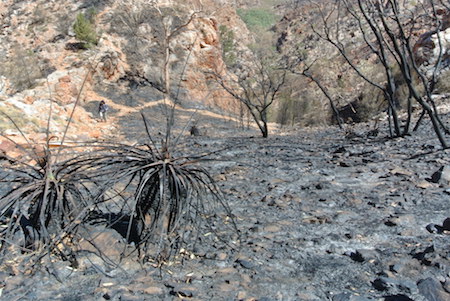 There is no doubt that we have to do the numbers about tourism income we are missing out on, plus the cost of what is clearly ineffectual fire fighting, plotted against the cost of hiring big water bombers.

An expert in fighting wildfires spoke to the News on the condition of not being named and we obtained information from Tasmanian fire authorities.

The expert says in using big bombers, substantial facilities and staff are needed on the ground to fill up the plane for each sortie.

That sounds more daunting than it probably is: 15,000 litres is the equivalent of a small swimming pool, no big deal for an engineering company to build a tank that size, on wheels.

The airport has a highly trained aircraft fire fighting crew, a fire commander, a station officer and four fire fighters, who no doubt could handle the refilling of the bombers, or substantially assist.

The station has two fire trucks, each carrying 8900 litres, and is equipped with powerful pumps.

Our source says using just water is normally not successful. It needs to be mixed with substances that turn it into either a retardant or foam.

The retardant is sprayed ahead of the fire, stopping it or slowing it down.

Foam is sprayed directly onto the fire, putting it out.

The foam is produced on the plane itself, injecting the chemical into the water. The retardant has to be mixed on the ground and a suitable mechanism would need to be installed in the tank.

The next question is environmental impact.

“The recent fire in the West Macs was fuelled by introduced grasses in river and creek corridors and burnt through mostly inaccessible terrain with steep slopes.” 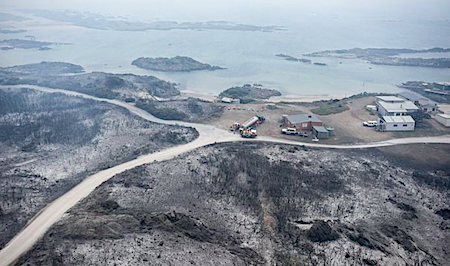 A spokesman for the Tasmania Fire Service says it uses mostly just water for the fire bombing, and “the foams and retardants dropped on these fires are bio-degradable and not considered a concern in the concentrations used for firefighting”.

Meanwhile the NT Senior Director Parks and Wildlife Operations, Chris Day, is dodging our questions: He is answering requests for precise details with generalities not containing information we are requesting.

• What was the budget for this precautionary burning last year?

• What impact will the fires have on the tourism industry?

• What has been the budget, year by year, for precautionary burning since 2011?

Most people we spoke with in preparation of this article left no doubt that precautionary burning is the key strategy to prevent big fires.

“Tjoritja / West MacDonnell National Park has an annual fire action plan that is prepared by March of each year.

“This plan takes into consideration all prescribed burning and naturally occurring fires from the previous year, along with climatic and fuel load conditions and maps out fire mitigation requirements for the coming year.”

Mr Day gives no details about the locations and extent of precautionary burns, the information we requested.

“These plans have input from the Traditional Owners of the park as joint management partners.

“These fire action plans are linked to the long term integrated conservation strategy for the park.

“This strategy defines the broad principles of fire management and the values of the park which are being managed.

Mr Day describes a recent meeting at which “a list of actions has been developed that will help build on the successes of the incident management of this fire and improve in those areas that were identified.

“No key tourism infrastructure has been damaged and rangers and volunteers are working hard to have track markers and signage in place and ready for the 2019 walking season. 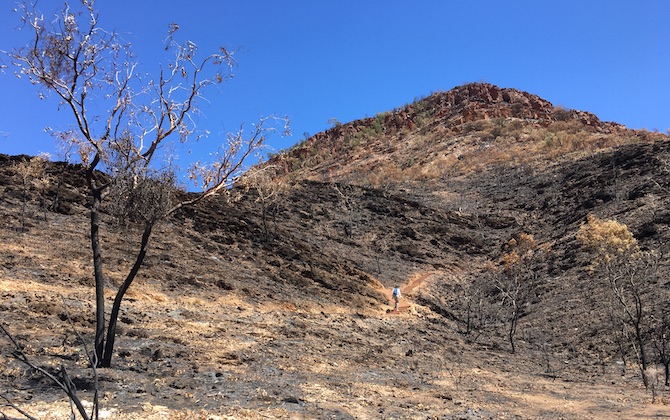