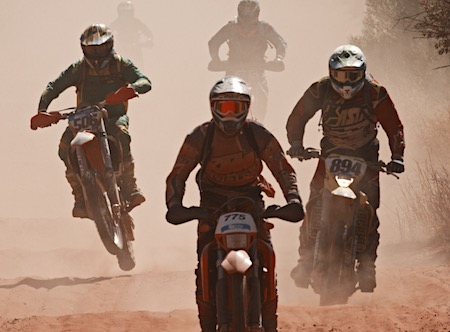 To ride the Finke, there and back, is one of the hardest things anyone can do, especially at the level of the top contenders in the desert race.

They need immense physical strength to cope with the merciless pounding for two hours, and another two the next day, riding one of the most challenging courses in the world.

They need to be fearless, or be able to conquer fear of travelling at speeds of up to 200 kilometres an hour on a treacherous outback track.

They need to make the bike a part of their body and developed automatic reflexes to perform tasks quite out of the reach for the mere mortal.

A good dose of luck is useful.

This fraternity competes against one another fiercely every millisecond of the race, yet not only maintains its generous mateship and cheeky good humour, ribbing each other – it thrives on them.

The big screen movie made in Alice, Finke: There and Back, captures all of that, and wraps it into images of an almost lyrical beauty: Time and again a new chapter is introduced with the alluring scenery, often shot from choppers.

Early or late in the day the long-lens pictures condense the craggy orange hills, the ranges, the green scrub which puts in doubt its description as a desert.

The film, shown publicly for the first time in the Alice Springs Cinemas on Friday (all four theatres were sold out) is a success story for The Centre in so many ways: It is big-budget. 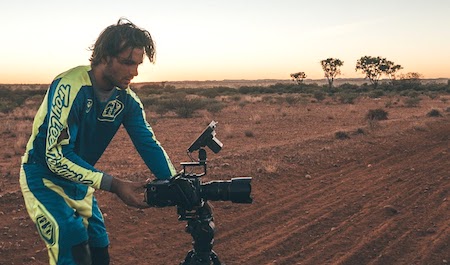 The young director, Dylan River (at left) is “born and bred”.

Top-of-the credits cinematographer Shane Mulcahy has decades of experience in The Centre.

The credits – hundreds of names – are largely a Who is Who in The Centre.

They shot 300 hours of material over two years for the one-and-a-half hour movie, using some 30 cameras, including several Go-Pros which mostly malfunctioned, says Ms Clements, but when they didn’t they produced some astonishing pictures.

The crashes are phenomenal.

A chopper-borne camera formats on a bike flying over the popular jump not far south of the start, past dozens of spectators (below).

There is a telephoto shot, slightly slow-motioned, of five or six bikes bouncing over the notorious whoops. It looks like a ballet (at top).

Looking for a story about heroes who can’t stop talking about their passion? You’ve come to the right address:

“Once it is in your veins the race is an incomprehensible addiction.”

“It’s escapism in its purest form.”

And that’s were River, who has raced in the Finke seven times, does his interviews – scrub, hills, rocks, spinifex as the backdrop.

There is Geoff Curtis, who won the first Finke in 1978 on a Yamaha 250 which he used to ride to work and was normally fitted with a hessian bag on the fuel tank for his dog sit on.

I’ve reported on all Finkes and encountered Curtis one time after the southbound leg, at Finke, wandering around the camp, carrying a can of Coke.It was maybe in 1980 when he won again, on a 500cc Yamaha that time, or in 1985 when he ran second.

Good boy, I thought, keeping yourself nice for tomorrow. Then I discovered the Coke can was half rum. In those days it was hard to tell whether the Finke was a race or a party, he makes clear in the movie.

River’s clever direction brings us close to these blokes without needing explanations.

Daymon Stokie won the 2017 race featured by the movie, with a broken left hand. A feat of extraordinary stoicism. His tragic death in another local race just months after is respectfully acknowledged by the film.

Five-times winner Toby Price is there but not racing a bike because of an injury. He was in a buggy.

There is Scruff Hamill from Sydney where his living room is full of motorbikes and an old van.

For him Finke is a pilgrimage you have to do, and so he packs an old Suzuki and his swag on the back of his ute and consults a map.

He gets about as far as the Hay Plain and then – pointing to the edge of the table – says Alice Springs is up there somewhere. 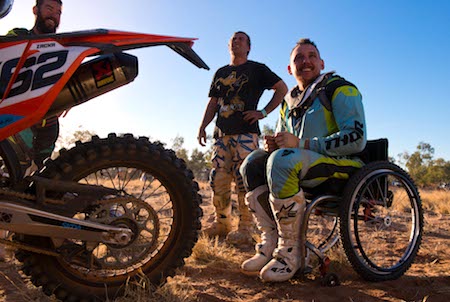 He doesn’t finish the race – this is called DNF – and is reported missing in action for quite a while because he’d stopped to help another rider.

And there is Isaac Elliott (at right), co-producer of the film, paraplegic, no feeling from the waist down after a bike accident, for whom The Finke was a life commitment: A bike was adapted for use of hand controls only and his legs were jammed into frames either side: When he stopped he would fall over.

He finished the race, there and back, with pit crews keeping him upright as he pulled in, and in the company of two ghost riders, as they called them, keeping an eye on him. Mateship? There’s your definition.

There is a big back story to this movie. 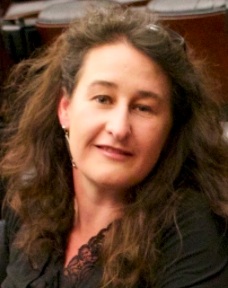 In a town where entrepreneurial initiative is not exactly in generous supply, Brindle Films turns over $1m a year, as Ms Clements (pictured) told the Rotary Club of Alice Springs last week.

The club had given its $18,000 Paul Harris Fellowship to Isaac Elliott in 2011 which has helped him to develop his own movie making business in Australia and overseas.

She has an unshakable belief in the movie-making potential of the town.

Their recent works prove it: Song Keepers about the Central Australian Aboriginal Women’s Choir for NITV and MIFF was last year’s fourth most viewed big screen documentary in Australia.

The six half-hour series 8MMM Aboriginal Radio, set in Alice Springs, was shown by the ABC.

Thirteen half hours of the kids show Double Trouble went to the Nine network and Disney Australia – it doesn’t get much bigger.

“There is a really tremendous crew here,” she says.

“We are really lucky here with the quality of camera people, of production support. You’ve got to give people a go. Like most industries, we always have to punch above our weight.

“Anna Cadden is a wonderful cinematographer. She edits. We have to multi-skill here.

“One of our big challenges would be the cost of travel,” says Ms Clements. Travel is often essential for keeping in touch with investors.

“If anything would ever get us out of the Territory it would be the cost of travel.

“We get most of our money from interstate, from Federal funding bodies, broadcasters, other state agencies. We get a lot of support from Screen Territory of the NT Government.

“There is not a lot of training capacity and opportunities in Central Australia apart from giving kids [work opportunity] with what we do.

“One of our business plan objectives is, we must always train the new generation.

“We work a lot with Indigenous film makers. As Brindle Films we make things that cross over, not necessarily Aboriginal films or white films, just representing the Northern Territory.”

Projects in development need “traction that will make people invest money.” Brindle are still marketing films they made five years ago.

“You’ve got to crack the cycle, having momentum. Putting your next project through contracting while you finish your last one,” says Ms Clements.

“We generally make two films a year. That’s about our capacity.”

In the pipeline is a film about Uluru and one about domestic violence, “the wonderful work the Tangentyere ladies are doing,” plus a one hour documentary about Aboriginal history using humour: “If you can laugh about things you can actually start talking about them.”

Given that Finke is a huge story, having to leave so much out is a source of constant agony for the producers: The fastest Finke competitors these days are the four-wheeled machines but this being a “bike movie” they don’t  get much air time.

One of the outstanding aspects of the event is the involvement of some 360 volunteers (there is usually only one paid employee).

There is long-time volunteer grader driver Glen Auricht, town councillor in another guise, who levels the track’s roughest edges so that your “arse doesn’t smash through your brain”.

More of these track-side characters would have been better than the scenes about the rather obvious coordination meetings with police, and so on.

Also, long time race committee president Antony Yoffa came across as rather too preoccupied by the race’s dangers whereas he obviously loves it and heads up a big and diverse organising group with elegant diplomacy and good humour.

The first task is to follow up on the already substantial pre-sales through the prominent distributor Madman Entertainment, which will launch the movie nationally mid this year, with sales to other countries and IT platforms.

Then, she says, the thinking cap will go one: Finke – The sequel? Drivers instead of riders? Women in the bike saddle or behind the steering wheel?

The opportunities are as vast as the country which Finke: There and Back celebrates so joyfully.