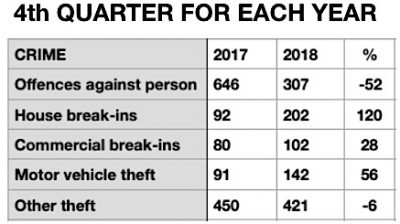 The number of house break-ins in Alice Springs during the fourth quarter of 2018 were more than twice the number compared with the corresponding period in 2017.

However, offences against the person were down 52%.

Break-ins into commercial premises were up 28%, and vehicle thefts, 56%.

The offence data were extracted from the NT Police PROMIS system on February 1.

Chief Minister Michael Gunner was not available for comment.

There were 1258 alcohol-related emergency department presentations at the Alice Springs Hospital in the last quarter of 2017 compared to 705 in 2018.

That is a drop of 44%, lending credibility to the offences against the person statistics from the Department of the Attorney-General and Justice using data recorded by the Northern Territory Police.