The evasive closing gap: Focus must be on kids, says Morrison

“We cannot hide from the fact that on average at the moment Indigenous children do not have the same opportunities as other children growing up in our country,” said Prime Minister Scott Morrison (pictured) commenting on the Closing the Gap report.

“The original targets were well intentioned but developed without the collaboration and accountability for states and territories and without input from Indigenous Australians.”

It was hardly a ringing endorsement of the work by NT Senator Nigel Scullion, the Minister for Indigenous Affairs since September 2013.

“Australia’s Closing the Gap targets will be redeveloped in partnership with Indigenous Australians for the first time with a direct focus on education as the key to unlocking the potential of this and future generations,” said Mr Morrison.

A new suite of initiatives includes:

• Teacher boost for remote Australia – Removing all or part of the HELP debt for 3,100 students to encourage more of them to work as teachers and stay working in very remote areas.

• Youth Education Package – $200m extra support to give more Indigenous students the support and mentoring they need through their secondary studies.

• Getting kids to school – working community by community and school by school to invest $5m in remote and very remote areas for projects that support and promote school attendance.

Senator Scullion said the new education measures were designed to build on the success of existing Government policies developed in partnership with local communities.

“At the heart of our agenda has been getting children to attend school and stay at school. I’m pleased that with the Prime Minister’s announcement today, we will be able to further increase our efforts and investment with remote communities.” 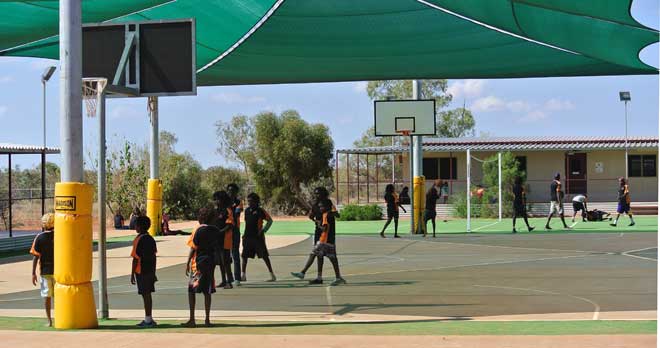 Above: Arlparra School (Utopia), photo from our archive.

He also said the Indigenous Advancement Strategy has been able to double the number of Indigenous organisations delivering services to Indigenous people since its establishment in 2013.

“This is a spectacular increase from the 30 Indigenous businesses winning just $6.2m in contracts in 2012-13.

Mr Morrison said in his statement to the House of Representatives yesterday he wants Aboriginal children to have the same opportunities as all other children growing up in Australia: “But this is not true in Australia today.

“It’s never been true. And I don’t know when it will be true. And that is the truth we must confront again today.

“I remind myself of this truth each day as I walk into my office, as I have done for many years.

“In my office is a photo of a plaque embedded in a rock memorial at a remote outstation in Central Australia that I visited with [Tony Abbott] and Senator Scullion many years ago, outside a small school that was attended by Shirley Ngalkin.

“When Shirley was away from her community, she was brutally raped and drowned by teenage boys in Hermannsburg in 1998. She was six years old. She would be a young woman now, probably raising her own family, perhaps her own daughters.

“On her memorial it says ‘I am Jesus’ little lamb’, with the prayer that she now rests in His care. I pray that is true, because we certainly failed to provide it. And we still do.

“I’d like to tell you that this no longer happens. But we all know it does, even though we are often told we shouldn’t say so, but we should.

“Young girls are taking their lives in remote communities, so are young boys. Lives are being consumed in a hopeless dysfunction that seems to defy any sensible response.

“While I am not going to pretend today that this situation does not remain in an unforgivable state, I am going to say that we can never rest as a nation until we change this for all time.”

Above: Hope for the future, children from the Sadadeen Primary School Choir singing at the Sorry Day commemorations in Alice Springs in 2017. Photo from our archive.

“Born out of the National Apology, Closing the Gap was recognition that words without deeds are fruitless.

“The process that began in 2008 was born of good heart [but it] reflected something of the hubris of this place.

“It did not truly seek to partner with Aboriginal and Torres Strait Islander peoples.

“It believed a top-down approach could achieve the change that was rightly desired. That Canberra could change it all with lofty goals and bureaucratic targets.

“It was set up to fail. And has, on its own tests. And today I am calling that out.

“This was not a true partnership – not with the states and territories, or with Indigenous peoples themselves.

“Yes, there was more funding, programs, workers, and accountability – but this was just another version of what we were already doing, so often unsuccessfully, in different forms, for generations.

“At COAG in December last year, all governments committed to share ownership of, and responsibility for, jointly agreed frameworks, targets and ongoing monitoring of a refreshed Closing the Gap Agenda, with Aboriginal and Torres Strait Islander peoples at its heart.

“COAG asked that this work be finalised by the middle of this year.

“Our communities need the jobs and economic growth that makes true aspiration viable – and we need a renewed focus on education so that the next generation of Indigenous men and women will have every opportunity to participate in and contribute to our economic prosperity.

“Since 2008 Indigenous child mortality rates have fallen by 10%. The child mortality rate is a rate per 100,000 children, and so with a small population, the rate moves around a lot from year to year. That means we have to be cautious about any claim of improvement.

“While the Indigenous child mortality rate has fallen, the non-Indigenous infant mortality rates have fallen at a greater rate. While we welcome both falls, the gap has not narrowed.”

On education Mr Morrison said the biggest improvement over the past decade has been in Year 12 or equivalent attainment.

“We have witnessed an almost 18% jump in the proportion of Indigenous Australians achieving this milestone since 2006. More Indigenous students are now graduating and moving into employment or further studies [with children in very remote areas achieving] the largest leap in attainment, with rates rising from 23%in 2006 to 43% in 2016.

Mr Morison said the Australian Indigenous Education Foundation, the Clontarf Foundation “and so many other programs are producing great outcomes.

“The Government will provide an extra $200m in support over the forward estimates for scholarships, academies and mentoring support.”

Meanwhile, among the responses to the launch of the report, Oxfam has expressed its disappointment in the focus being only on new initiatives in only the area of education.

“With only two of the seven targets on track, State and Federal Governments around Australia must commit to working with First Peoples’ leaders to develop solutions from the ground up with local communities, and investing the necessary resources in these solutions.

“We welcome the support from the Prime Minister and Opposition leader Bill Shorten to create a formal COAG partnership with Indigenous leaders.

“However, much more needs to be done to address the lack of recognition, and on this front we applaud Mr Shorten’s commitment to hold a referendum on establishing the Voice to Parliament in his first term of office.

“Mr Shorten’s commitment to invest in Aboriginal healthcare providers is welcome,.  The pledge now needs to be matched with financial resources and planning.”

Change the Record, a group which advocates on justice issues, is also disappointed “that justice and housing targets are being pushed onto the states, family violence and child removal targets are considered “optional”, and disability was forgotten altogether,” according to its co-chair Damian Griffis.

“These are critical issues for our community that require meaningful leadership from the Commonwealth to close the gap.”

“The proposed state-based justice targets only aim to reduce the over-representation of Aboriginal and Torres Strait Islander people in prison by a tiny 5% over 10 years,” said fellow co-chair Cheryl Axleby. “Meanwhile, our people continue to die in custody, our children are in solitary confinement, and our women are the fasting growing prison population. Almost all women in prison are themselves victims of violence.”

The Community and Public Sector Union was also critical of the 100 jobs in the Department of Prime Minister and Cabinet slashed from regional and metropolitan areas outside of Canberra since June 2015, with a further 75 positions cut in the ACT. The “vast majority” of those jobs were in Indigenous Affairs, according to the union, that is, in the agency tasked with running the Closing the Gap initiative.

“These job cuts in the Department of Prime Minister and Cabinet mean this Government has slashed more than one in 10 jobs in Indigenous Affairs in less than four years,” said CPSU Deputy National President Brooke Muscat-Bentley. “These cuts have hit some parts of the country particularly hard, with the Government slashing 40 jobs from the Northern Territory alone.

“These job cuts are a double body blow for Indigenous people. Clearly this has an impact on the important services that Indigenous Affairs provides, but these positions that have been cut were also desperately needed permanent, quality employment opportunities for Aboriginal and Torres Strait Islander people.”