A series about high achievers from Central Australia 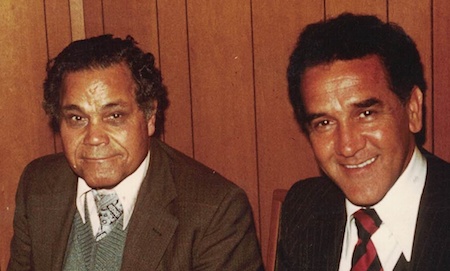 Stolen child Joe Croft grew up at The Bungalow in Alice Springs and became the first Indigenous Australian to enter university.

Most of the stories told about the Stolen Generation are understandably sad, but this one is a little different. This is a story of goodness, compassion, forbearance and success with a quantity of sadness in the mixture. This is Joe Croft’s story.

A descendant of the Gurindji and Mudpurra people from the Northern Territory, Joe Croft was forcibly removed from his mother at just three years of age and spent his childhood in government institutions including The Bungalow, the historical Telegraph Station in Alice Springs.

Joe barely remembered his mother when he was taken from her at the age of three on Victoria River Downs Station in the Northern Territory in about 1929.

All he knew was the loss of warmth and comfort and a feeling of inexplicable loneliness as he sat in the back of a dirty, rough government truck on his way to Kahlin Compound in Darwin. Joe’s mother followed her son to Darwin, but Joe didn’t know. Kahlin was overcrowded so Joe was soon on his way south to the Pine Creek Children’s Home and his mother now lost track of him.

However, Joe didn’t stay at Pine Creek long either for he was soon in the back of a truck again on his way south to the Government Compound at Jay Creek west of Alice Springs.

Here he was bundled into an iron shed that served as a dormitory. There were many unhappy and confused children at Jay Creek who had been drawn from the surrounding station and settlements.

Local pioneering school teacher Ida Standley and well know local Aboriginal woman Topsy Smith were very kind to the children and did their best to compensate for the trauma the children were suffering because of the separation from their mothers.

What a travesty it was that the white fathers did not want their children and the Aboriginal mothers were not allowed to keep them.

Joe began to learn to read and write and he grew to love the walks and picnics into the hinterland of the MacDonnell Ranges.

Not too much time went by however before the government trucks rolled into the compound to take the children away yet again.

Anglican children at The Bungalow in 1938-39. Joe Croft is the altar boy at the far left. Father Ken Leslie is standing at the back to the right. Sister Kathleen is standing in the middle row.

The vehicles unceremoniously rumbled along the dusty road into Alice Springs where the children were driven to the site of the Old Telegraph Station, two miles north of the town.

At least there was plenty of water from the springs, while the living conditions, though barely acceptable, were an improvement on Jay Creek.

Joe soon found himself an iron bunk in the boys’ dormitory on the lower of the three tiers. Mrs Standley was now gone and Joe did not like the new superintendent. The man was a bully and abusive to the girls and everyone feared him.

It wasn’t all bad for another person came into Joe’s life.

He was the Anglican priest who had some to Alice Springs in November 1933 to begin the first parish. His name was Father Percy Smith. He had been expressly asked by the Bishop of Carpentaria, Stephen Davies, to give special attention to the children of The Bungalow seeing that 80% of them were baptised Anglicans.

Every Wednesday and Sunday Father Smith would come to The Bungalow to minister to the children and Joe became a server.

He and Father Smith were soon good friends. Often Father would have to walk the two miles to the Old Telegraph Station and the children would watch to catch sight of the slight figure coming along the dusty track carrying a small case.

Father Smith soon appreciated Joe’s potential and with assistance from the head teacher, Walter Boehme. They helped Joe to study for his Qualifying Certificate, which he passed admirably.

Father Smith was keen for Joe to go onto secondary education. Native Affairs wanted Joe to go to Adelaide, but Father Smith would not agree because there was nobody there with whom Joe would identify.

Eventually the government allowed Father Smith to arrange for Joe to go to All Souls’ Anglican School, Charters Towers in Queensland. Father Smith’s sought support from his brother, C E Smith, who was a member of the board of governors of the school.

He made the arrangements for Joe’s enrolment. C E Smith and his family became a critical support for Joe after his relocation to Queensland in 1939.

Father Smith was confident that Joe could show Australia what Aboriginal people could achieve given the right set of circumstances. The only money that the school received for Joe’s tuition and board was what came from the NT Native Affairs branch.

Joe did exceptionally well at All Souls, passing both his junior and senior certificates. The headmaster Canon O’Keeffe took special interest in Joe and he graduated in 1943 after becoming school captain, prefect and captain of the cricket, football and swimming teams.

In 1944 Joe was awarded a Commonwealth scholarship to attend the University of Queensland to study engineering and became a resident of St John’s College, making him the first person of Aboriginal descent to enter an Australian University.

His academic results were very good, but with the impact of the second world war he left university to join the army. There is little doubt that if Joe had continued his studies he would have graduated.

After the war he qualified as a surveyor working on dam building and railway line rebuilding projects from 1950 until 1971. He married, had two children and in later years worked for the Department of Aboriginal Affairs in Canberra and also served on the Anti-Discrimination Board.

Joe always acknowledged the role that Father Smith and the Anglican Church played in his formative years, but not withstanding this nothing can detract from his determination, his will to succeed against exceedingly difficult personal odds, his positive and outgoing personality, his humility and his desire to do the best for his own family.

It was indeed a just reward for Joe that in 1974 he was reunited with his mother Bessie after a separation of forty-five years. When they met in Darwin his mother instantly recognised him!

Joe Croft passed from this life on July 22, 1996 aged 70 and his family took his ashes to his tribal home in Kalkaringy, Wattie Creek, NT to be buried in the land of his ancestors.

His daughter, Brenda, writing in 1998, had this to say about the Stolen Generation: “Aboriginal people who were taken away from their communities often travel vast distances in a subliminal, as well as a literal search for themselves and a place to belong. My family was fortunate that so many people kept their memories and gifted them to us, helping fill in the missing pieces.”

During the 1990s All Souls School recognised the achievements of its former student, the late Joe Croft, with the establishment the Joe Croft Scholarship. It assists suitably qualified Aboriginal students to attend the school.

The school also named a stand at the O’Keefe Oval, the Joe Croft Pavilion and in 2015 the University of Queensland created the Joseph (Joe) Croft Indigenous Award in his honour.


[The author, John P McD Smith, is the son of Father Percy Smith (1903-82), first resident Anglican priest in Alice Springs in 1933. John has written his father’s biography, The Flower in the Desert.]