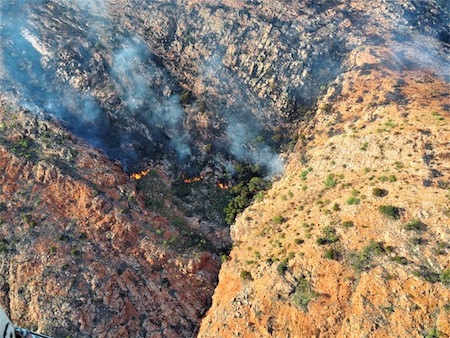 “The landscape has been devastated … some real old growth cycads. From what I have been told, the Ghost Gum Walk doesn’t have any ghost gums any more.

“I think Alex Nelson is right: We’ve got more worry with buffel grass than floods in this town. In my opinion, buffel grass is the biggest threat to this part of the world.”

But this is what’s emerging: “It is a management issue where resources have not been made available for Parks to do the buffel management that is necessary,” he says.

“Fire management in the Park has been inadequate to non-existent.

“If we are not managing our natural resources we are going to lose what makes the Territory special.”

Mr Cocking (pictured) says climate change is making buffel grass an ever growing problem: “Working with traditional owners and Aboriginal rangers, people who’ve been using fire for decades” this weed needs to be brought under control with patch burning in the cool part of the year to “avoid the hot summer burns we have experienced.

“This fire is unprecedented as it is following two dry years as opposed to following wet years” which historically have been providing dangerous fuel loads.

He says fire has a firm place in The Centre, but as a vital management tool, not as an out-of-control, destructive force: “Cool, small fires are good.

“Visitors to the Larapinta Trail need to understand that fire is also part of the landscape, and will be part of actually protecting the natural assets for the long run, as opposed to now, where the whole place is charred.

“We can’t rely on the rain to restore this landscape because buffel is going to spread if there is no management.

“People are not going to want to visit Litchfield full of gamba grass and the MacDonnells full of buffel, and burning annually.

“Small fires are needed to protect the most important assets. We know it’s going to get hotter and drier, but when it rains we can expect more intense rainfall.”

This may cause erosion and even faster spread of buffel, resulting in “a uniform growth of grasses, buffel or spinifex, and if we don’t manage with that in mind, it will all burn in one hit unless the country is broken up using patch burning.”

Should that have been done last year, in the cool months?

“Of course it should have. We need to reflect on what has been done, or hasn’t been done, but we need to look forward from here.

“The Minister responsible does need to commit to resourcing buffel management.”

Did the public and the environmental organisations – including ALEC – sound the alarm bells last winter when no fire mitigation action was taken, given that outstanding experts in the field, including Peter Latz, have been urging for decades to patch burn?

“It exists within the strategic plans for the park. It is mentioned that they need to be doing this. Whether the resources have been allocated is another question. When we see a plan we anticipate it is going to be implemented. Obviously it hasn’t been.”

Does ALEC keep a watching brief?

“We have very limited resources. Unfortunately in this case we do not have the capacity of being a watchdog. When it comes to parks we expect them to be managed the way they are intended to be. There are potentially some systemic issues, but again, we need to learn from this experience and make sure it doesn’t happen like this again.”

Mr Cocking says ALEC staff will be heading out to the West MacDonnell ranges next week to make their own assessments of the damage.

Mr Cocking says: I have been informed that ghost gums do remain on ghost gum walk, but many have been damaged.