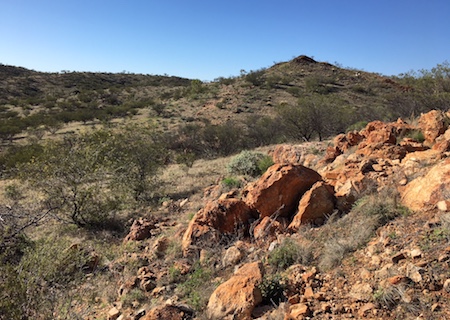 Thor Mining says it has confirmed extensive tungsten mineralisation at Bonya, 350km east-north-east of Alice Springs, while allied Arafura Resources has released a “definitive feasibility study” for its Nolans rare earths project north of the town, at near Aileron.

Thor Executive Chairman Mick Billing says samples were collected at Bonya in December 2018 from trenches excavated across the deposit more than 40 years ago.

The Bonya tenement is held jointly with Arafura Resources adjacent to the Molyhil mine project. Thor Mining is the joint venture operator.

“Traditional owner and regulatory clearance for a drill program at Bonya are in progress, and we hope to be licensed to commence drilling this month.

“The Samarkand deposit is just one of what we believe will be series of satellite tungsten and copper deposits at Bonya within economic trucking distance of Molyhil, thus making the case for Molyhil development even more compelling.

“Current indications are that Bonya tungsten mineralisation is coarse grained and may be amenable to low cost pre-concentration by x-ray ore sorting and treatment at the Molyhil processing plant.”

Thor is quoted on the London Stock Exchange and the ASX in Australia.

It holds 100% of the Pilot Mountain tungsten project in Nevada, USA, and the Spring Hill gold mine in the NT’s Top End, producing at a cost between $6 and $14 per ounce gold that is worth $1500 per ounce.

Meanwhile Nolan’s study shows there is high demand for rare earths for use in permanent magnets, for clean and efficient energy applications, like electric vehicles and wind turbines, says Arafura in a media release.

“Arafura will be amongst the world’s lowest cost producers with a significant phosphoric acid by-product for use in agricultural fertilisers.”

The construction workforce will be about 650, with an operational workforce of 280.

Construction workers are likely to be largely FIFO but Arafura says it hopes to recruit as many operational staff as possible from Central Australia or attract families to live in Alice Springs, says the statement.

The mine will have an initial 23-year life “with significant opportunity for longer project life”.

All processing will take place at the Nolans site near Aileron in the NT.

The next steps will clearly be crucial for Arafura. It says they will include “raising the finance”; negotiating an agreement with native title holders through the Central Land Council; and seeking a mineral lease from the NT Government by mid-2019.

“Subject to finance, the board will consider a final investment decision during 2019, with construction possible from late 2019-early 2020,” says the release.

“In 2018, Australia’s resources exports – including minerals, metals and petroleum – generated $248 billion in revenue. This is the highest-ever annual export value and accounted for 72% of Australia’s goods exports,” says Ms Constable.

“Australia’s world-leading gold industry” was also performing strongly, “with $20 billion of gold exports based on rising production at existing operations and new mines opening up in Western Australia.

“Importantly, this new record in resources export revenue is delivering benefits to all Australians through the creation of high-paying, high skilled jobs. The mining and mining equipment, technology and services sectors supports one in ten Australian jobs, mostly in regional and remote communities.”