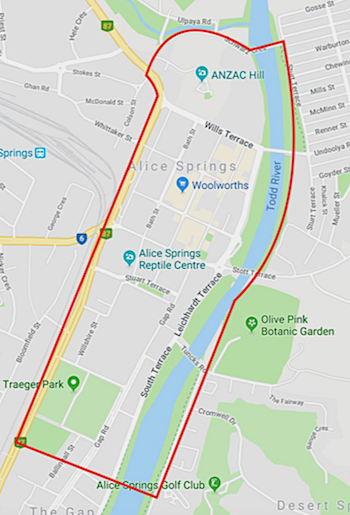 Numerous Alice Springs master plans are already gathering dust and the next effort may well go the same way, guided by the inevitable interstate consultant.

There is the proposition for the latest document constructing our future to be “owned collaboratively” by the Town Council and the NT Government, the latter under a crushing record debt largely of their making, with little to show for it.

A “Master Plan 2050 and Alice Springs Town Centre Master Plan 2030” would both connect “today with tomorrow” and “articulate a shared community aspiration and ensure a co-ordinated process for enhancing the social, economic and environmental conditions over a time”.

So says the consultant, “futurist” and former Lord Mayor of Adelaide from 2010 to 2014, Stephen Yarwood, who summarised in a preliminary document released this week what he’s been told by council members and staff, mainly during two workshops last year.

Given the all-encompassing ambitions of the plans, the list of intentions is surprisingly limited:–

There is no acknowledgment of the serious incidence of anti-social behaviour and crime, especially by juveniles, nor the ghettos where it is bred, underpinning the drop in tourism, the stagnant population numbers, and the transformation of the suburbs into hundreds of fortresses with high fences, CCTV and ferocious dogs.

Also, just using the word “opportunity” does not dissolve the threat that comes with particularly heat, as this last summer attests, and flooding, potentially catastrophic and which we have avoided by good luck, not management.

That’s the Alice version of “global urbanisation [that] is upon us and, in response to this and other megatrends, cities and towns around the world are transforming more rapidly than ever before,” as Mr Yarwood puts it. If we are seeking the answers, we need to ask the questions – have the councillors briefing him overlooked that?

He describes Alice Springs as an “already thriving town” which gives a “lasting impression to all that visit. It has a unique character that is appealing.”

Many locals who have left town, and visitors who have had bad experiences, would find it hard to agree with that.

How will it all work?

“The City of Adelaide Act is one example of a process established between a regional government and local council to ensure effective collaboration between both parties in the interests of an effectively operating and developing a significant city centre,” writes Mr Yarwood.

“The Adelaide Capital City Committee … is chaired by the Premier of South Australia and includes the Lord Mayor of Adelaide, two state government Ministers and two City of Adelaide Councillors.

“The Committee’s legislative foundation gives a clear signal that the commitment to collaborate is backed by real intentions.”

Surely if all the above persons were performing adequately in their day jobs, they would not need to form yet another committee.

Add to that successive NT Government plans and the work of the NT Planning Commission – the head spins.

Cr Cocking says a “broader long term development vision” is needed, supported by the NT Government and the community”.

The government needs to be on board  “because they have the major planning powers and money for development, such as art galleries, health, education and other essential services,” says Cr Cocking.

“This is a great step forward for the town. All councillors have expresses ownership. I am excited and happy where we have landed with this first step.”

We can only hope the main course will not give us indigestion.

Facebook
Twitter
Pinterest
WhatsApp
Previous articleHorses to be culled, dead ones left for sun to 'do its work'
Next articleKids from The Alice: When Malcolm met Menzies