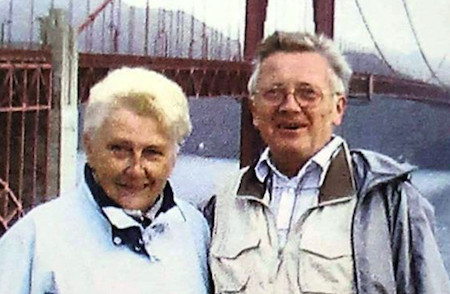 Five weeks before Monika Billen perished, possibly as early as January 2, in bushland not far east of Alice Springs, Coroner Greg Cavanagh made a recommendation intended to prevent a tragedy of this kind.

It is unclear whether the Department of Tourism, to whom his remarks were directed, and by extension, the tourism industry and its representative body Tourism Central Australia (TCA), have acted on his suggestion: They have not replied to questions the News put to them. We will report any answers we receive from them.

It had taken Judge Cavanagh nearly two years to report on the deaths of Wilfried Thor and Gisela Thor (pictured) in circumstances very similar to those of Ms Billen’s: Germans coming from the chill of European winter to the furnace of the Central Australian summer, striking off into the bush ill-prepared and with no backup in place in case they got lost.

Although there was much debate following the Thor tragedy, clearly little has been done in response.

This is what Judge Cavanagh said: “I recommend that the Department of Tourism and Culture do all such things as may be necessary to advise visitors who may visit its parks in areas without telecommunication reception of the existence of GPS applications and the use to which they might be put when visiting those areas.”

There is no indication that the department has done this – and another tourist is dead at a time when the industry is stagnant, quite apart from the pain it is causing to Ms Billen’s and the Thors’ families and friends.

That sole recommendation seems quite minimalist in the circumstances. But Judge Cavanagh said in his findings about the deaths of Mr and Mrs Thor: “This tragedy illustrates that systems such as signage and fencing can fail. The purpose of having backup systems is that failure of one does not necessarily result in tragedy.”

There would seem to be many other common sense measures authorities and operators could take to ensure we adequately look after our visitors.

We included some of them in questions put to the manager of Desert Palms, where Ms Billen had stayed, in an email at 11am on Friday last week. We included the department and TCA in the request for answers by emailing the questions to the media staff of Minister Lauren Moss and TCA chairperson Dale McIver.

• Do you have a protocol to inform your guests about the dangers of outdoor activities, especially in the hot part of the year? If so, please describe that protocol.

• Do you encourage your guests to inform you about any walks or treks they may be undertaking, including their destination and the time of their intended return, and is there a routine to alert police if guests are overdue?

• It is clear Ms Billen’s room was not used by her between 10.30am of January 1 and January 5 when she was due to check out. Some of her belongings were in the room. Did the cleaning staff or anyone else report this to you on any of these four days?

• Ms Billen’s absence came to your notice on January 5. Yet it took until about 11am on January 8 – three days – to make a report to the police. Why?

• Are you a member of Tourism Central Australia (TCA)?

• Have the department or TCA been in touch with you about implementing the Coroner’s recommendation?

• Have the department or TCA, following the death of Mr and Mrs Thor, or at any other time, provided information about how these tragedies could be made less likely?

Neither Tourism Minister Lauren Moss, nor Tourism Central Australia, nor Desert Palms have replied at the time of publication.