The NT Government, reeling under the Territory’s gravest ever financial crisis, is putting $400,000 into a venture that may have difficulty getting off the ground: The Great Air Race, commemorating the London to Darwin flight by Australian military aviators Ross and Keith Smith 100 years ago.

This year’s re-enactment will include aircraft that are battery powered and have only electric motors.

Hans Tholstrup, a seasoned events organiser, says there is far too little time for potential competitors to prepare for the air race.

This is bound to limit participation to big companies which already have electric prototypes.

Mr Tholstrup is the founder in 1987 of the World Solar Challenge, in which sun powered cars traverse Australia from north to south via Alice Springs.

A government spokeswoman says the air race organisers, Inspire Strategic Solutions, will launch the event in Darwin on March 19.

The re-enactment race is planned for October this year.

The company is still canvassing for expressions of interest by intending competitors. 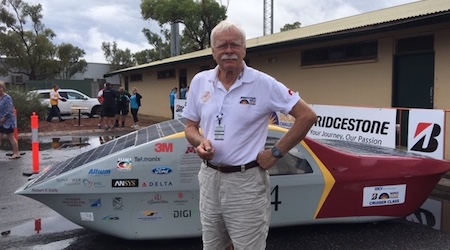 Mr Tholstrup (pictured) says the lead time is absurd, it should be at least two years, a matter which he raised with the NT Government in 2017.

Meanwhile the government has not acted on an offer of $1m in prize money from entrepreneur and adventurer Dick Smith who floated the idea more than two years ago.

In March 2018 Chief Minister Michael Gunner announced in a media release that “the Territory will be promoted to the rest of the world when electric-powered aircraft are used to re-enact the London to Darwin Great Air Race next year” and that the NT Government “will partner with event management company, Inspire Strategic Solutions, to mark the historic event”.

Mr Tholstrup says he discussed the proposal with NT Tourism Minister Lauren Moss at the start of the Solar Challenge in 2017 and made the following suggestions:

• Blitz media across the world about the air race re-enactment.

• Accept Mr Smith’s offer which would be an adequate incentive for aviators to enter.

• No NT Government money would be needed: The NT public service, including Major Events, could provide the few facilities on the ground that would be needed in Darwin.

• The Territory would get international publicity for no outlay.

Mr Smith told the Alice Springs News Online last week he still “would like to see the event take place” but he is considering other recipients for his $1m.

Meanwhile it is unclear what control the NT Government will have over the spending of its $400,000, at a time when Senator Nigel Scullion describes the Territory as “bankrupt”.

We asked: “What will the NT Government’s $400,000 be spent on? What is the fee for Inspire Strategic Solutions and what is it doing for that fee in connection with the race?”

A government spokeswoman replied: “Funds are being utilised to support the development and implementation of the event program which will be announced on March 19.

“There is no fee associated with the funding, as Inspire Strategic Solutions are the owners of the event and responsible for all elements of event delivery, budget and risk management.”

A spokesman for Inspire Strategic Solutions says the deal with the government is “commercial in confidence”.

He says he has no knowledge of Mr Smith’s intended offer, although it was reported in The Australian newspaper on November 5, 2016 and March 19, 2018.

What’s the Territory getting out of this?

“The Northern Territory has witnessed and experienced some of the most poignant moments in Australia’s history. Through this project we have the potential to create awareness and interest in the NT, demonstrating our leading role in Australia’s past and future, as well as creating reasons for visitation to explore and experience history and innovation,” says a government spokeswoman.

PHOTOS: Mr Tholstrup (News archive), others from the Great Air Race website. From top: The Vickers Vimy in which the race was won 100 years ago;  electric aircraft; Mr Tholstrup with a solar car;  Ross and brother Keith Smith with co-mechanics Wally Shiers and James Bennett.

Dick Smith says: “I gave the $1m to Rotary when the Federal Government would not support the race.”