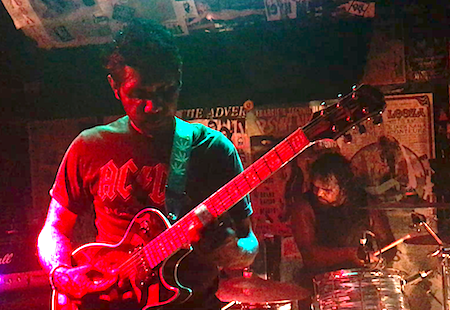 The walls are plastered with photos, old school – the bands that have played Frankie’s Pizza, a music venue in the heart of the Sydney CBD, and the crowds that have loved them. But there’s never been a band like this one, Southeast Desert Metal. Straight from remote Aboriginal Australia.

For a metal band, the song starts softly, the rhythm comes from clapped boomerangs.

Chris Wallace’s voice is deep and resonant: “In my dreams I’ve been into the spirit world / through my eyes I see suffering and pain / chains of blood of our ancestors before our time / here we are today …”

Then the metal sound breaks through, loud, driving, howling out the anger and sorrow of the wrongs of history and the way they’ve been buried, laying down the challenge: “Can we all break the silence?”

The song is the title track of their new CD, Break the silence, the second they’ve recorded with the Alice Springs based Black Wreath label.

The publicity tag for the band is that they’re “the most isolated metal band in the world”. From an Alice Springs perspective they’re locals, from just down the road at Ltyentye Apurte (Santa Teresa), but perhaps that makes us a bit complacent about what they have to offer, its originality.

“Jaws were on the floor”, said Pirate. He’s the drive behind the building profile of metal music in the desert and the organiser of this east coast tour. He’s also manager and the creative impetus of Black Wreath.

Its studio on Smith Street is a powerhouse, recording three full albums in 2018. Apart from Break the silence, there was also Pure Evil by Pirate’s own band, Snakes, and Merciless Hate by the two-man outfit Hell Machine.

To date the east coast tour has also included Snakes and Hell Machine.

Performance-wise, for all of them, the show at Frankie’s Pizza on Sunday night was the highlight.

“You get on stage and you’re straight into it, nailing it.”

That they are all from “the middle of nowhere” adds a bit of interest for people, he said, but they are also developing a following in the metal scene. In Brisbane on the first night, a whole bunch of people turned up wearing Blacken t-shirts, from the annual metal festival in The Centre that Pirate has been organising since 2013.

“We’ve connected with an audience. It’s a matter of time, we’ve been doing it for a long time and people have responded,” he says.

The bands played three shows in and around Brisbane before hitting Sydney. That’s was the last stop for Snakes and Hell Machine, but today Southeast Desert Metal are flying out to Tasmania, where they’ve got gigs in the world-famous MONA (Museum of Old and New Art) in Hobart and are on the program of the Mona Foma Festival in Launceston.

Then it’s back to Victoria, for the BLAZE festival in Ballarat, but even more exciting, says Pirate, is an opportunity that has just come their way, supporting legendary Aussie punk band, the Cosmic Psychos, for three gigs including one in Melbourne at The Espy in St Kilda.