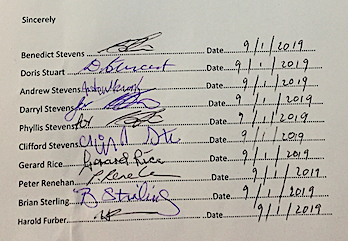 “Our families have concluded that while there is strong support for the NT Government to build a National Aboriginal Art Gallery at a suitable location in Alice Springs, we do not support the use of Anzac Oval site for that purpose.”

It was co-signed by nine other senior Central Arrernte traditional owners, of the Stevens, Stuart, Rice, Sterling and Furber families.

The letter was tabled by Councillor Eli Melky at a meeting of the elected members of the town council yesterday, called to discuss an offer from NT Treasurer Nicole Manison to buy Anzac Oval.

Subsequently, Peter Renehan – son of Doris Stuart, both signatories of the letter – responded to a call from Mr Stevens to come to his house, where he was being put under pressure by government officials.  Says Mr Renehan: “He said that they were saying that if he [Benedict Stevens] changes his mind does he realise that this gallery won’t go ahead, to that effect.”

The council has invited the signatories to its end of month meeting.

When the Alice Springs News Online this morning asked Mr Renehan whether the signatories were likely to change their minds, he said: “I can’t see how that can happen now.

“You’ll see when they are put under enormous pressure … it’s difficult.

“We need the space as a family group to sit down and talk through all of these things because this is the future of our town. We are not given the opportunity to have that space and the time to have our meetings and go through these processes as a group, together,” said Mr Renehan.

“Benedict kept saying to me all this pressure is on me, I can’t make that decision by myself, I need my family with me, that’s why he approached us.

“The family groups could see the amount of pressure Benedict was under and he asked the families to come and meet. That’s what we’ve done… We need to continue to do that, make these decisions for the development of our town together.”

They wrote in part: “We the undersigned write to you as Mparntwerinya, the traditional owner people of this place and are recognised by all Arrernte people as the true Apmereke-artweye for the central part of Alice Springs, going back many generations.

“Following many discussions, the priority for our families are now united and want to make decisions properly and together.”

The letter says the signatories had “spoken to many of our Kwertengerle from here and other Arrernte Family estates, and they fully support us to make our decisions about what happens to our country”.

The letter urges the council and the government to consult with “all relevant family members”.

The letter is the result of several meetings triggered by a media event staged on the banks of the Todd featuring only Benedict Stevens expressing support for the Anzac site.

This event followed a meeting with council earlier that week of many more Arrernte people, reported to be supporting Anzac precinct as a site for the gallery.  The letter refers to families “who had previously held different views”.

It was Benedict Stevens’ urging for discussions that has since brought the families together, says Mr Renehan.