The search for missing German tourist Monika Billen has circled back to within a few hundred meters of the hotel, Desert Palms, which she left on January 1, presumed lost. There are new leads but the massive police search is continuing.

Police have managed to established that she made her way – possibly walked – through The Gap and east along Ross River Drive south of the MacDonnell Range, to the scenic Emily Gap, possibly camped there, and walked north, possibly along the Emily Creek, to Undoolya Road which is leading back to the town north of the range.

She was taken by a motorist to the iconic Olive Pink Reserve, a stone’s throw from the CBD and the tourism precinct where her hotel is located.

Police are now calling for motorists on Barrett Drive or Ross Highway on New Year’s Day or January 2 to contact them if they have seen a person fitting the description of the 62 year old tourist.

After leaving her hotel at about 10.30am on January 1, Ms Billen walked south along the Todd River and “travelled” to Emily Gap, according to Supt Vicary.

“We are trying to clarify if she walked the entire way to Emily Gap or whether she was assisted with transport,” she told a media conference today. 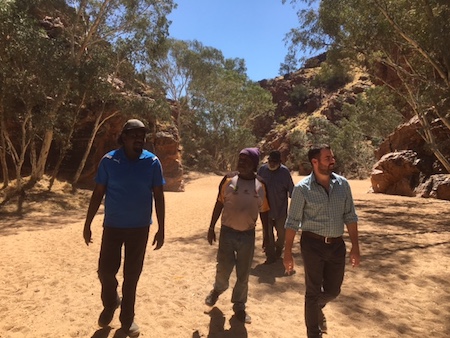 “On January 2 we believe a motorist spoke with Monica, and offered her a lift which she accepted,” says Supt Vicary.

“She also offered her some water which she declined. The motorist conveyed her to this location (pictured below) at Olive Pink Botanical Gardens and she was last seen walking along Barrett Drive.”

That is a few hundred meters from the hotel, Desert Palms, where she had been staying.

Police drones are now being used along Barrett Drive – the main road leading through the tourism precinct and past the casino – and around the Olive Pink Gardens.

Ms Billen’s clothing is now described as including a “yellow Cashmere type scarf around her head and shoulders to protect herself against the sun and heat” – 42 degrees at noon on that day – beige shorts and a short, red top.

Asked about any concerns given that crime is common on Barrett Drive and in the adjacent Todd River, Supt Vicary said: “We are not discounting anything at this stage but [we are] still focussing at search and rescue. We will continue to search until all our avenues are exhausted.”

It appears that Ms Billen “hiked” out to Emily Gap via Ross Highway – south of the range – she made her way through the gap to the north of the range the following day and – possibly having walked upstream the dry Emily Creek – reached the extended Undoolya Road between Alice Springs and Undoolya Station. 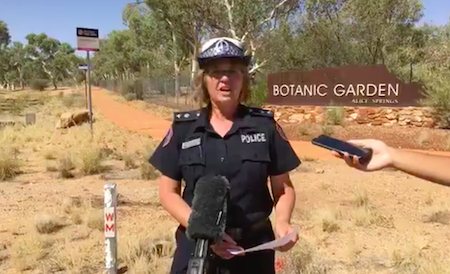 Supt Vicary said: “She’s come back through Undoolya Road and was picked up by the motorist who has dropped her back here (at the entrance to Olive Pink Reserve, pictured).

“We don’t know what happened to her once she came back here, because she did not get back to her hotel. We are focusing around this area.

“We’ll be conducting doorknocks of the South Terrace (on the opposite bank of the Todd River) later on today. Tomorrow morning we’ll be focussing on doorknocks on Barrett Drive.”

Police say in media statements: “Further enquiries have now placed the motorist who picked up Monika on December 31 and then witnesses seeing a person they believe to be Monika at Emily Gap on January 1.

“The last physical sighting we have for her is the Emily Gap and surrounding area, which we have thoroughly searched.

“Unfortunately despite our efforts no further evidence has been found to indicate Monika is still out there. Neither is there any evidence to indicate foul play.

“At this stage we will suspend further aerial searches and continue to conduct enquiries to refine our search parameters.”

Police said today: “We’ve refined the dates and times and can confirm a motorist did indeed see Monika on the Undoolya Road / Sturt Terrace (near Casa Nostra). However, it was on December 31, not January 2 as initially thought.

“Having made further enquiries from the witnesses and surrounding details, detectives have determined the last physical sighting of Monika was on the afternoon of January 1. Hence air and land search efforts centred across the north side of Emily Gap on Friday and Saturday.”