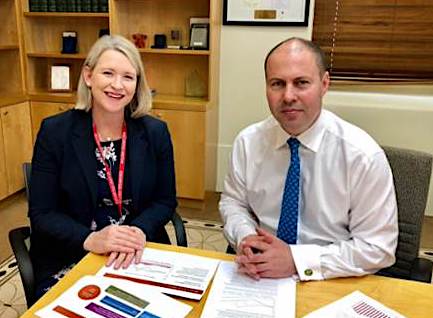 A social media happy snap of him and NT Treasurer Nicole Manison from last year was all we got from Federal Treasurer Josh Frydenberg yesterday when we asked him – again –  to provide responses to questions on the Territory fiscal crisis.

That was more than we got from Ms Manison to a request for comment December 21, and to questions we put to her on December 16: What is the collateral the NT Government is borrowing against? What is the amount borrowed at present? What is the interest rate? What are the banks? What credit rating does the NT Government have at present? What impact on the rating is the current crisis likely to have, in your opinion What requests are you going to make from Canberra tomorrow?

These are the questions we put to Mr Frydenberg on December 21:

Will the Federal Government bail out the NT Government? If so, on what conditions? How much will it spend?

Given that the NT is not a state, and Canberra can overturn NT decisions, and that the preceding (Giles) government, without Federal consent and knowledge, sold the 99 year lease to Port Darwin to a Chinese company with reported links to that country’s military, is there a case for Canberra to pay more attention to what happens in the NT?

If so, to what avail? If so, does Canberra have ultimately responsibility for the current NT Budget crisis? What will you do about it?

Is return to “Canberra control” such as it existed before self-government, an option being considered? Any other comments.