The financial crisis in the Northern Territory 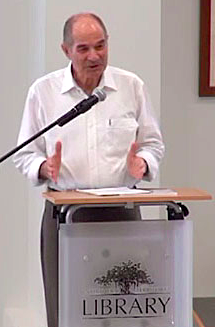 Editor, you asked whether I might do an opinion piece on this current debate.

On the income side of the ledger, the Northern Territory is hugely reliant on our share of the Goods and Services Tax (GST). We have been gutted.

On the expenditure side, the Northern Territory Government has been under enormous pressure to spend. The armchair experts (usually in leafy suburbs on the east coast) seem to expect that the Territory has a limitless capacity to provide gold plated social services, of EVERY kind found in the big cities, to every small pocket of population in the bush.

The Australian Government was quick to appoint a Royal Commission into the Protection and Detention of Children in the Northern Territory (not the States who all have serious problems, I notice) but slow to assist with implementation of the 189 recommendations. And it has for decades tried to get away with providing the capital funds for something, and then dumping the recurrent costs of operating it on the NT. We could go on and on.

What follows is an edited version of a talk I gave to the Historical Society in Darwin in June 2018, titled “Fracking, Aborigines, and the GST”. It reveals most of what was on my mind.

The Goods and Services Tax (GST)

A bit of history:

The States ceded income tax powers to the Commonwealth in WWII. Ever since the State Premiers and Treasurers trekked to Canberra to plead for a bigger share of the financial pool, and for a bigger pool.

The size of the pool was resolved to some extent about 2001 by allocating all GST receipts to share amongst the States. Some then lobbied for backdoor funding. Western Australia has been spectacularly successful in recent years, and I understand they have been rewarded with over $2 billion above their GST share. This year the NT will get $259.6m above our GST share to compensate for sharp losses.

The Commonwealth Grants Commission (CGC) has been around since 1933 and advises the Commonwealth on interstate relativities. The Commission adopts Horizontal Fiscal Equalisation principles. Or allocation “according to need” for the layperson.

The aim is to provide each jurisdiction with adequate funds to deliver an average level of services. (There is no catch-up money here to allow the NT to address the infrastructure deficit we inherited at the time of Self-Government).

Obviously, with an enormous geographic footprint, a tiny population living mainly in the bush (as distinct from those people huddled in cities on the eastern seaboard), and around 34% Indigenous (next highest jurisdiction is about 4%), it is going to cost more to deliver service X here than it would in Victoria.

It would appear that the main reason both these jurisdictions are in tight financial circumstances is because each has tailored their recurrent budgets to peak revenue years (WA on iron ore, and NT on the Indigeneity loading), and an assumption that would continue forever.

Western Australia’s share of the GST dropped markedly in recent years, driven down by massive iron ore royalties. It got to as low as 30c in the dollar.

The Northern Territory’s share has dropped from a high of around $5.60, to $4.26 for the current year. We have been driven down by a declining share of the national Indigenous population. 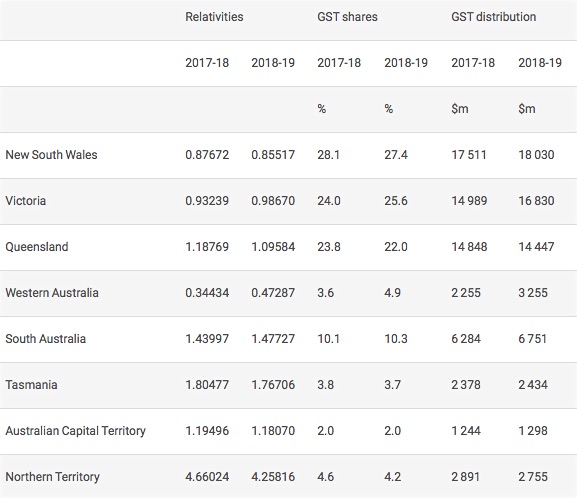 Is change on the way?

The Productivity Commission (PC) has recently completed a review of the CGC’s methodology on reference from the Treasurer. I believe there can be no argument that this review is a consequence of the level of complaint by WA about their share of GST.

Remember that the CGC has been in the business since 1933. It has a world-wide reputation for excellence. Its staff have provided consultancy services right around the world to central governments implementing Horizontal Fiscal Equalisation Principles in their funding relationships with their own states. Now we have government meddling.

Initially the PC planned public hearings in a couple of southern cities, but amazingly not Darwin. The Yothu Yindi Foundation (YYF) complained bitterly. The PC eventually came here. The YYF delegation, of which I was invited to be part, appeared at the hearing, and lodged a submission.

We strongly included points about the Australian Bureau of Statistics (ABS) approach to Census collection, and about the CGC’s practice of using Indigeneity as a cost-adjuster without determining “relative need” between the widely divergent circumstances of First Australians in different parts of the country.

I said at the hearing (and it was part of the YYF submission) that:

“It seems to me, for example, that a double university degree, double income family in their own home in Parramatta would have less value – should have much less value in the weighting that the Commonwealth Grants Commission would give to an Indigenous family with several inter-generational levels of welfare dependency, all unemployed and in a humpy in a remote community like Papunya.”

The then Treasurer (the Hon Scott Morrison MP) is on the public record as saying it appears that a State which has put in an above average effort on revenue collection like WA is penalised by the CGC methodology. And another jurisdiction, like the NT, is rewarded for blocking potential revenue by placing a moratorium on fracking. The writing was on the wall.

I warned the audience at Garma the last couple of years that given this thinking, it is only a matter of time before the Treasurer / Treasury turns its mind to where the wealth is generated in the Northern Territory. And that in turn leads you to the Land Rights divide. Would it be fair if policy decisions by the Commonwealth itself [the Aboriginal Land Rights (Northern Territory) Act 1976], or by the Land Councils in denying development consent, reduced Northern Territory GST revenue?

The PC handed its Report to the Treasurer on May 15, 2018, and he said he would release it the “next month”. We anxiously awaited the outcome.

The Northern Territory’s reducing share of the national Indigenous population

This is not a misprint.

A chart can be found on the Australian Bureau of Statistics (ABS) website showing the growth in the Indigenous population between the 2011 and 2016 Censuses, by State. There has been phenomenal growth in the numbers in Queensland, NSW, and Victoria in particular.

The ABS has revealed a number of things:

There are other issues that stare at one. Self-identification, whether as a consequence of the work of genealogists who find an Indigenous ancestor many generations ago (Tasmania for example), or for fraudulent purposes, is an issue. There is no testing of claims in the Census process.

Let me be clear – I am pleased that people would take pride in their Indigenous ancestry – my difficulty is with a methodology that doesn’t distinguish between the well-off, and others who have had a lifetime of deprivation. It is not a race thing for me, but a “needs” thing.

Draining funds from the Northern Territory

One newspaper dramatically described the loss of funds as “like taking foreign aid from South Sudan and giving it to Donald Trump”.

Draining funds from the bush

Both past and present Northern Territory Governments say that around 53% of outlays is spent on the Indigenous population that sits at around 30% of the total population.

These figures appear to be reached by apportioning departmental budgets to consumer groups. For example, if 95% of the prison population is Indigenous, then its reasonable to apportion 95% of Correctional Services entire budget as Indigenous expenditure. Ditto for the other departments. This might explain that it is more than a perception that a fair share of the Indigeneity GST loading doesn’t reach the bush.

This raises the spectre of senior public servants in high rise buildings in Darwin’s Central Business District having a portion of their costs attributed as Indigenous expenditure.

And between 2004-2016 the Northern Territory public service has grown by 40% against a population increase of 20%.

Our anxious wait for the Treasurer’s response to the Productivity Commission’s Report on the GST confirmed our worst fears. He announced the States would be guaranteed 75 cents in the $. In future only 25% of the collected revenue would be distributed on a needs basis, as compared to 100% in the past. That spelled devastation for the NT! (And a huge win for WA!)

A final thought on borrowing. I’m attracted to the idea that it is unreasonable for this generation to pay cash for all the facilities others will enjoy in the future, and only fair future generations should share some of the financial load through loan repayments. But how much loan debt can we reasonably incur?

That is the question.

As for the notion that Self-Government has failed and that Canberra should take over, I subscribe to the view that no matter how bad a Northern Territory Government (and I agree we have had some shockers), returning to a Canberra administration is unthinkable.