Suddenly everyone is talking about 1Territory

The 1Territory Party is joining the fray, guns blazing, sensing a golden opportunity as the government in Darwin and both the government and the opposition in Canberra are tight-lipped over the fiscal fiasco in the NT.

Its president, Braedon Earley (pictured), who has a solid background in the Territory’s conservative politics, says the emergency is “self made by the Labor Party” which had ignored advice from his party ahead of the 2016 elections.

“We have experienced business people,” says Mr Earley. “We have people with honours degrees in commerce, with degrees in economics in our executive and management committees.”

He also accuses Labor of duplicity in preference dealing at that time of the 2016 election.

And he says: “Labor can’t keep blaming the CLP although they, too, have been found wanting on so many different issues.”

Mr Earley claims 1Territory (a name change is rumoured to avoid confusion with Pauline Hanson’s political activities) “will gain its place in history. It will put up 25 candidates in the next NT election. We do have policies, ideas and solutions around the NT Budgets, how to stick to a Budget going forward, and how to fix this economy.” 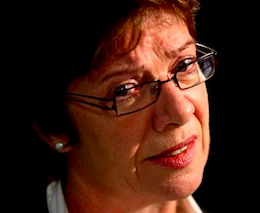 He says the problems have been created by gas companies including Inpex and the Labor government when they were in power the previous time, prior to the CLP being elected, “when the likes of Paul Henderson and Clare Martin (pictured, SMH photo) invited Inpex to Darwin without crossing the Ts and dotting the Is.

“That includes failing to secure a gas reservation of 10% to 20% of all gas that comes on shore.

“Inpex wasn’t prepared to do that in WA which is why they came to the NT. We didn’t have a gas reservation policy.

“Labor let Inpex take up a large part of the tourism accommodation in Darwin, as well as serviced apartments, impacting not just on the tourism industry in Darwin but in the whole of the NT,” says Mr Earley.

“There was no construction camp big enough to accommodate the revolving door of construction workers at the Inpex plant, thereby raising the prices and creating a boom-bust scenario in real estate.

“This all happened under Labor’s watch, and the advisors to that Martin / Henderson Labor government were the likes of Michael Gunner, Nicole Manison and you might find [Darwin commercial radio station personality] Katie Woolf was in there as well.

“We are getting spin doctors planted in media outlets telling us what we should think, bleating about fracking and how it is going to save the economy.

“And who’s to say that won’t happen with fracking? Is there a gas reservation attached to fracking? No.

“Has there been a social and economic impact statement drafted that shows there is not going to be a boom-bust scenario, traffic control issues, environmental disaster issues, there’s not going to be community impact? No!”

We asked Mr Earley how firm is the claimed requirement for a royalty going to the NT Government amounting to 10% of the value of the gas at the wellhead?

The government sticks to its claim while a resource expert says the figure is more likely to be 2% or 3%.

Says Mr Earley: “Royalties are based on profit. If there is no profit there is no royalty. And that is the same, as I understand it, with the Tennant Creek to Mt Isa pipeline. No profit, no royalties, that’s my understanding.”

He says while Labor knew the GST would be cut and that Inpex construction phase would end, they “kept spending willy nilly” including more than $30m in excess of the budgeted figure on “advisors and consultants, so many tens of millions on a car park we don’t need, $100,000 on a driverless bus on the waterfront we don’t need, employing two assistant chief executive officers in the Department of Chief Minister whom we don’t need. They had six adverts in last week’s paper for public servants with pay scales in excess of $200,000.

“That’s all while the economy in Darwin has gone backwards at a hundred miles an hour. In my opinion there has been nothing short of 30,000 people leave Darwin. The prices of property have gone backwards by in excess of 20% to 30%.

1Territory is staunchly anti fracking – in fact this is its signature policy – and would ban it if in power.

But Mr Earley is not clear about the future of the gas industry if it uses only conventional drilling but not fracking. Clearly, highly prospective regions such as the Beetaloo Sub-Basin, 900 km north of Alice Springs, would still produce some gas. He says his party has no objection to conventional production.

What volume would be lost if fracking is not used?

“The risk to the environment is one thing, increasing carbon emissions and affecting climate change is another. The NT, under a 1Territory watch, is not going to be responsible for adding to emissions which exacerbate and increase climate change.

“Mereenie and Black Tip will remain but additional wells using fracturing will not be allowed. Additional conventional wells would depend on the climate impact statement and the contribution to climate change.”

“He should have been the Attorney General instead of a swimming coach being put into the job.

“These are the mistakes that Labor has been making. Kenny Vowles has been removed from the Caucus because he’s been telling the truth about the current status of the NT economy.

“Anyone who ridicules the Chief Minister for his incompetence is sacked from the Caucus. That’s not leadership.”

Asked why he is reluctant to articulate now the solutions his party has for fixing the current crisis, Mr Earley says Labor has in the past “plagiarised” 1Territory ideas.

NEWS: Would it not be a good thing it Labor plagiarised some good ideas right now?

EARLEY: We offered Labor our ideas and our assistance during preference deal meetings. Labor reneged on its promises. One of those was to keep a five year fracking moratorium in place. They reneged on Budget deals and the economy. You can’t trust Labor. We are not about to enter into any negotiations for assistance with Labor now or in the near future. Labor, if it proved itself to be a failure, to lack leadership, to be unable to cope with ridicule from its one peers, if it wanted to do the right thing for Territorians, it would dissolve government and hold an election. It won’t.

NEWS: Even if Labor did not adopt 1Territory’s suggestions for fixing the crisis, would the party not gain kudos for putting them before the public?

EARLEY: I can tell you how to do a valuation of a house. I can tell you how to ride a horse. That doesn’t mean you can necessarily execute those instructions. You have to have hardened experience. You have to have at least 20 to 30 years in business. Of paying the rent, paying wages, making ends meet, meeting your interest repayments. You have to have some commercial or business acumen apart from stacking shelves with cans at Woollies [as Mr Gunner is reported to have done]. You have to have more than that to save an economy and run an economy. Nicole Manison has five portfolios including Treasury. She can’t run Treasury, how on earth can she run the other four? What a conflict of interest. She is not listening to Treasury. She is not reading the advice she was given two and a half years ago.

NEWS: The public is hanging out for viable solutions. If you have them, why don’t you disclose them?

EARLEY: We have the solutions but we don’t know what the current status of the NT Budget and the economy truly is. We don’t have access to Treasury telling us all there is to know. If the NT Labor Government is prepared to open the books, and have Treasury give us the full run-down on the economy and the Budget, including but not limited to who have they borrowed this money from, what are the interest repayments, what are the trailing commissions, who are the beneficiaries of these loans, for how much, how long and who set them up, where is all this money coming from that we are borrowing, what is the collateral and its value, what have they put up as a mortgage on the value of those loans, you tell us all those details, you give us all that information, we’ll give you the solutions of how to fix it.

(The Alice Springs News Online put similar questions to Treasurer Manison on December 16 but we have received no reply. The questions were: What is the collateral the NT Government is borrowing against? What is the amount borrowed at present? What is the interest rate? What are the banks? What credit rating does the NT Government have at present? What impact on the rating is the current crisis likely to have, in your opinion? What requests are you going to make from Canberra tomorrow?)