Home Issue 9 Not us and them. Just us, says Cr Melky.
Issue 9Volume 25

Not us and them. Just us, says Cr Melky.

The town has a new slogan and a new group, both called “Safe Alice Springs”.

He says there were apologies from Minister Ken Vowles, Independent MLA Robyn Lambley and 15 locals.

Families Minister Dale Wakefield, who is squarely in the firing line on anti-social behaviour and crime, especially so far as children are concerned, was present but did not speak at the meeting, and neither did the Mayor, Damien Ryan. 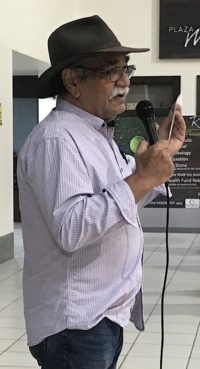 Cr Melky says he invited Mr Smyth to have an “apolitical element” at the meeting, “with a perspective of the town’s divisions as an outsider”.

The message of the group is ‘work together’: “Black and white come together,” says Cr Melky.

“Rosalie Kunoth-Monks spoke about the frustration about the division, and how much pain and hurt it causes.

“Harold Furber spoke of the unity that is required. He said he sleeps with a knife under his pillow now because he feels unsafe.

“He urges the community to put aside the ‘them and us’ issue. It is just us.”

Cr Melky says the take away from the meeting was to begin with launching the Safe Alice Springs campaign, with a message of unity.

He says up to 60 people present that morning expressed an interest in becoming part of a “delegation” to “take the message to the top, to all those in a position of influence and power.”

Local Senior Aboriginal people would be in a position to talk with other traditional owners from regional communities to help with the kids,  instead of “people in uniform throwing them into the justice system”.

Asked why Aboriginal leaders have not used their powers in this way in the past, given that the problems have been acute for many years, Cr Melky said: “There has been an opportunity for them to [make a presentation to] Council but remember, in 2017 traditional owners came to council and they were knocked back.

“When you constantly get knocked back, what are you supposed to do? Here we have persisted as a group and have brought the solution to the people, where the power is.

“And the people now will hopefully back it and with that we move forward.”

NEWS: Who has stopped traditional owners to ensure that parents look after their children, that people behave in an acceptable manner, that kids don’t break in and steal cars?

MELKY: Rosalie Kunoth Monks said it’s not the children’s fault alone, adults have to acknowledge that they too are failing our children who are caught up in the ugly cycle of crime. She urged everyone including mums, dads, grandparents, uncles and aunties to look after the children to help protect them.

NEWS: Why has Rosalie Kunoth-Monks not intervened three years ago?

MELKY: I wasn’t involved with her three years ago. She is a brave person, and so is Harold. They have both worked hard over many years. So after today’s meeting they have committed to join the delegation and  take the first step with the Alice Springs community united as one. They are prepared to acknowledge their failings and want us all to acknowledge our failing. So it is important not to post on Facebook, comments such as hang them or run over them, that hurts people. People need to take responsibility for that.

Cr Melky says after eight years in council, many more years as a businessman in Alice Springs, and surviving a civil war in Lebanon, “my solution is not military and combat, my solution is peace and unity”.