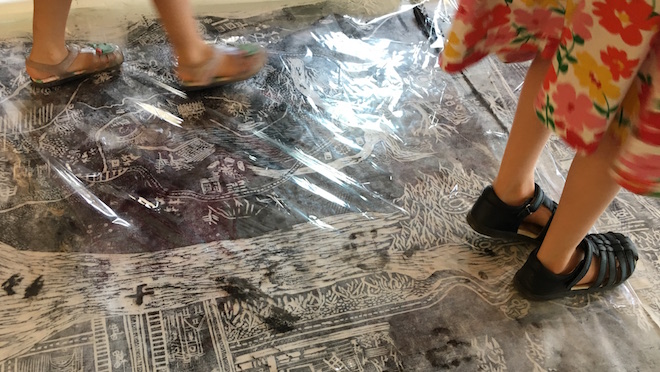 For decades, the arts have been at the relative margins in this sports-mad town. The Araluen Arts Centre’s program was as mainstream as it got.  Over the last few years big corporate moves have been made in the creative space, driven by the political agendas of successive NT governments and their agencies, responding to economic drivers. Undreamt of budgets, up to the millions, and scale of work, some as big as mountains.

The impact has been significant. 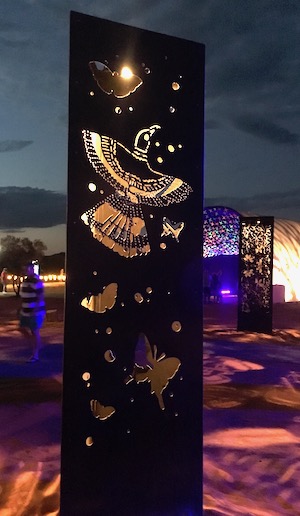 Lots of opportunities for local artists, although within frameworks not of their own devising (Parrtjima, image from 2018 iteration at left).

Arts and deep cultural questions at the heart of a community-wide conversation, but within an imposed and manipulated process (the proposed National Aboriginal Art Gallery) and alongside the sidelining of the Aboriginal community-driven National Indigenous Cultural Centre.

Another anniversary for the region’s major cultural event, Desert Mob, hosted in town, with no transparent  conversation about its future in the context of the proposed National Aboriginal Art Gallery, nor about the future of the Araluen galleries, for which it is the flagship event.

Big arts events (Parrtjima, Street Art Festival), alongside the disintegration of the homegrown Alice Desert Festival. This is not causal but it is linked.

A sudden flourishing of approved street art (Street Art Festival), again with uncertain or even any curatorial principles. It has nonetheless achieved a major work, the Yeperenye mural.

A new museum out of nowhere (Megafauna) while community-driven projects languish or are drip-fed (The Residency, Pitchi Richi, Akeyulerre’s Living Cultural Centre).

These are some thoughts as I look back on the cultural landscape in town of 2018.

There have also been some unalloyed highpoints:

Desert Song, with its strong dialogue between local musical traditions and others from around the world;

The Alice Prize, which continues its work of situating local visual arts culture in a national contemporary context;

Jennifer Taylor’s major exhibition, Dream of Home, with collaborators Tangentyere Artists, Areyonga Artists and Yarrenyty Arltere Artists, exploring the collective dream of our best days – a sense of being at home here, in this special part of the country, with one another, Aboriginal and other Australians;

Apmere angkentye-kenhe, ‘a place for language’, running for the second year in a row, bringing the first language of this place, Arrernte, literally into the heart of the town and onto the lips of those taking part.

Another highpoint was celebrated last Saturday night: the survival for 25 years of the artist-run initiative Watch This Space. I wrote last year of the Space’s creative and organisational renewal, with a new generation at the helm. This has only strengthened in the year not quite passed.

The Space’s energetic and capable coordinator Zoya Godoroja-Prieckaerts summed up:

It continued its travelling artist-in-residence program;

It initiated open studio events which allow work-in-progress to be shown to an audience;

It presented a number of “powerful and confronting talks, so important for reflection and growth”;

It represented Alice Springs at events at the National Gallery of Australia and Parliament House;

It advocated for artist-run-initiatives in Adelaide;

It fund-raised, with a “Poo Party” to build an accessible toilet;

It obtained grants to improve other infrastructure of its Gap Road premises.

And, in what Godoroja-Prieckaerts regards as its “biggest achievement” for the year, it succeeded in attracting Australia Council funding to pay artists to present their work, instead of artists having to pay the Space (of necessity, the model to date).

This will relieve some of the financial stress faced by independent artists, “especially when we’re not making work for your walls”, she said, but rather work that  “challenges perspectives and thoughts about your understanding of being in this world with others”. 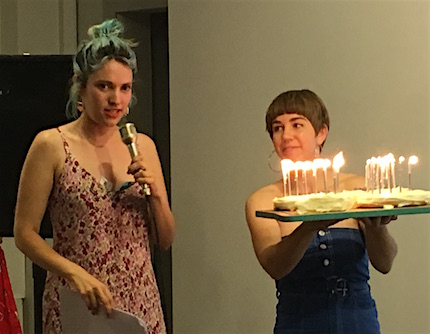 Against this backdrop – and as well, the context of the millions being splashed on the corporate-driven arts agenda I outlined at the top of this article –  the Space has successfully applied for a Creative Partnerships Australia Plus 1 funding drive. It means that  CPA will match dollar for dollar donations to the Space up to $25,000.

If that goal is reached, it will give them $50,000 untied, money that will be used to support “this little organisation to continue to punch well above its weight for the next 25 years of its life”, as chair of the board, Frankie Snowdon, put it.

On Saturday the Space conferred on artist and educator Suzi Lyon its annual award for high endeavour in the arts, The Lofty, named after the Space’s founding coordinator, and one of Central Australia’s finest artists, the late Pamela Lofts.

Lyon makes art and teaches across multiple disciplines – ceramics, printmaking, drawing, photography, textiles, animation, and immersive digital sound and light – with a deep interest in how she interacts with place, materials, people, and process, and a strong commitment to the natural environment. She has had residencies in China and the Arctic; she has shown with the Alice Prize and the National Portrait Prize.

At Charles Darwin University, she has “kept the art department alive in a time when myriad others nationally have diminished or closed”, said Snowdon, nurturing creative practice in town and out bush.

“Without art educators we would have fewer brave artists,” she said, thanking Lyon “from the next generation” for the “grit and vision” she has helped instil.

The Lofty is the only award of its kind in Central Australia. 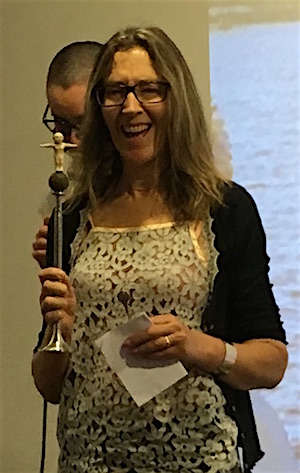 In her humble acceptance speech, Lyon put her finger on why we should care about Watch This Space, and by extension, I think, about why we should safeguard cultural expression grown at the grassroots and should push back at top-down approaches.

Right: Suzi Lyon with her Lofty trophy, made this year by Pip McManus. Frankie Snowdon obscured.

“There are not many spaces that are so inclusive, so welcoming, so imaginative, encouraging, and supportive,” she said, “and so believing that anything might be and is possible. That is Watch This Space.”

The Lofty award is a “beautiful thing because it keeps Pam’s presence firmly amongst us”.

“She was a special mentor to me, as she was to many others. She helped me push a little bit more, to be a bit braver, see a little bit further.

“But this is what we do, we are not alone, we are not islands, and what would be the point?

Below, in descending order: Belle Moody’s print is lifted from the woodblock • She hangs one half • The full work, which traces a memory map of her life in Perth, Alice, Melbourne, Tasmania (from right to left, with Alice appropriately in the middle) • The crowd applauds Suzi Lyon (getting to her feet at left in the photo). 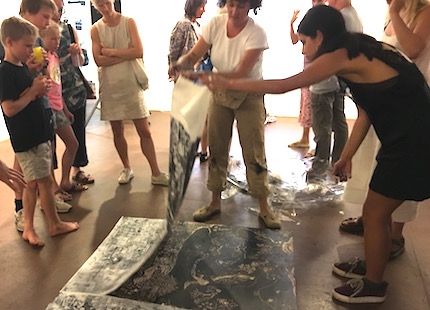 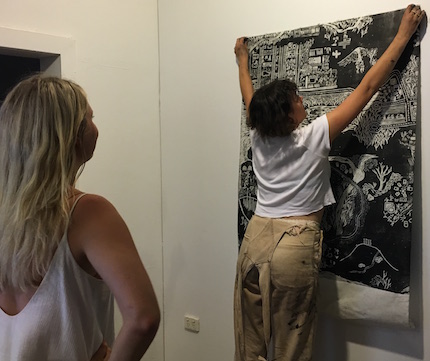 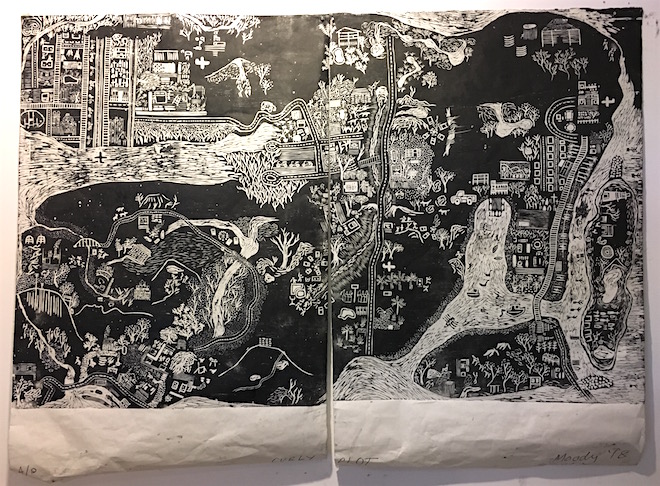 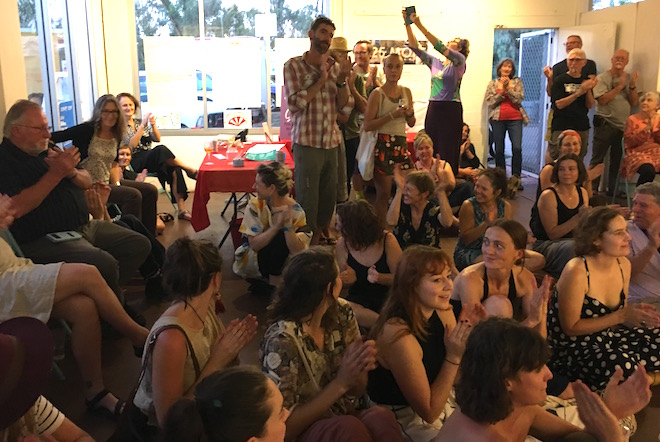