The NT Government is spending $66.9m on a “Client Management System Alignment program which will store all information about a client, providing a 360 degree view of a child”.

We are asking Minister for Families Dale Wakefield (pictured) for a breakdown of this very significant expenditure, $17m more than they have set aside for the National Aboriginal Art Gallery, for example.

What control over their data would clients have?  How can the taxpayer be sure he or she is getting value for money?

And will the program provide more than what NT departments are required to do – namely co-ordinate their functions in line with the endlessly touted “whole of government” approach?

In fact, a media release from Minister Wakefield amounts to an admission of current failure: “Crucially, the new system will also increase information sharing between agencies, significantly improve record keeping and reporting, and provide a single source of truth for frontline workers in child protection and youth justice.”

It won’t happen anytime soon: “The public tender will be a two-stage process, with stage one open until early December, focused on broad system requirements,” says the release. “Stage two will open in February 2019 for six weeks, with short-listed suppliers invited to submit a more detailed tender submission.”

In between will be another long, hot summer of crime. 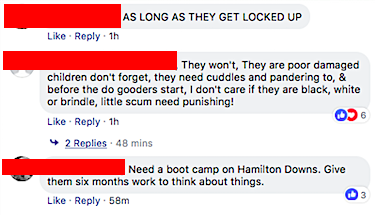 Meanwhile local posts such as these proliferate on social media: “Be careful in town, keep your doors locked. My girlfriend was in the Maccas drive thru, she had a group of about 30 kids between 10-17 years old try to get inside her car and when they couldn’t, they started throwing rocks, sticks and started hitting and kicking her car. She left straight away and it has been reported but be careful in the area.”

And: “This group of youths needs something to scare the shit out of them.”

And: “Are dogs trained to only bite people who run from the police?? If so, can we have more dog patrols here please. The more little fucktards who get a mauling, word might spread as to don’t do any crime.”

“The Youth Justice system in the Northern Territory is under siege from a government with very little credibility,” says Deputy Opposition Leader Lia Finocchiaro.

While in Alice Springs the location of the planned juvenile detention centre is still unclear, in the Top End the government is going ahead without adequate public consultation, Finocchiaro alleges in a media release: “The government has pushed ahead and lodged applications to rezone and subdivide the Pinelands site for its new youth justice centre and alcohol rehabilitation.

“They say it’s about ‘continued consultation’. What a joke – they are pushing ahead regardless of the very public opposition to it. They should have consulted before the announcement in August – not at this very late stage.”

Mrs Finocchiaro says the CLP would tackle youth crime through a number of measures including sentencing to practical programs, increased parental responsibility, moving youth justice to Corrections with support programs by Territory Families and building an appropriate facility in the vicinity of the Holtze prison.

The government’s so-called progress report of the Royal Commission recommendations also highlighted some gaps in their response. In their implementation plan the government has promised to, within one year, amongst other things “Improve Youth Detention Operations”.

“It is clear for anyone to see that the Labor Government has so far utterly failed to deliver on these promises. Don Dale was in flames only two weeks ago in the worst episode in years,” says Ms Finocchiaro.

“What is more, questions remain about the site of the proposed Alice Springs youth justice centre – the Minister continues to dodge giving a commitment. Why has it taken over 2 years to get to this point?

“Where it comes to youth justice – this government is boundlessly arrogant and incompetent.”