The emphasis is on “do” so let’s give Deputy Mayor Matt Paterson a cigar for his riverside park idea, and encourage him to keep up the good work. There is much of that the council can do on its own 148 square kilometres of municipality.

The pressing issue is to salvage our tourism industry: Assuming we can significantly scale down antisocial behaviour, let’s get ready to offer visitors so much more than The Rock whose attraction will diminish when the climb is closed. I mean, doesn’t looking at lights in the grass have its limitations?

THE GULLIES, a dozen or so, on the southern flank of the range to the west of The Gap are magnificent, rivalling King’s Canyon in rugged beauty. My family and I have climbed most of them. Two to three hours to the top from where the 360 degree view will take your breath away: The East and the West MacDonnells, the town, the country stretching beyond Ilparpa Valley to the south. 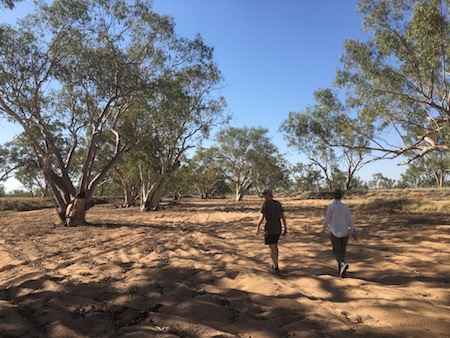 The council’s contribution? For a start, don’t stop people from getting there. Why is the road past the rubbish transfer station now closed? The first gully would be a 15 minute walk from the tourism precinct. Now it’s a circuitous route around the smelly sewage ponds, hard to follow.

In the medium term, what happened to the council’s discussions of moving the dump, while leaving the transfer station where it is, for public convenience?

Right now we have, in the middle of the municipality, the spectacular sacred site of The Gap right next to a heap of sprawling garbage to welcome arrivals from the south to Alice Springs.

THE TODD RIVER should be the town’s playground: Swagging it in the soft sand, under the stars, less than 15 minutes’ drive from the CBD. The river is rich in majestic, ancient gumtrees, and its use for camping, with a minimum of council supervision, could extend all way to where it enters a pastoral lease. 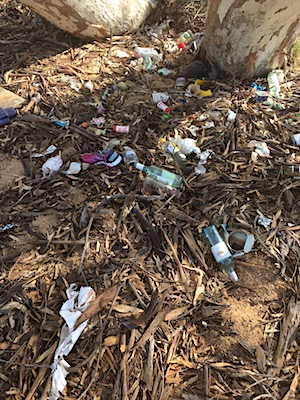 But somehow the town planners and the council have managed to block vehicle access to the southern bank of the river. Heffernan, Chateau and Schaber roads are dead-end. Some way should be found to allow vehicles through.

AT LEFT: That’s what happened when country is neglected. Garbage left in the Todd.

The only access to the river for rural residents, the growing Kilgariff suburb, and tourists turning off from the Stuart Highway is via the continuation of Colonel Rose Drive which is in poor, corrugated condition, unless they go via the John Blakeman bridge close to The Gap.

The eastern part of the huge AIRPORT LAND, when it was in public hands, was popular for locals and tourists alike who walked or rode their horses in the mulga and witchetti bush reaching all the way down to the Todd.

This was accessible from the airport side as well, bush treks so close to town and where visitors arrive.

The present private owners of the airport have made it known that they will run cattle in there and they have fenced the area and put up signs threatening trespass prosecution. It’s the kind of snipping away at the freedom that used to be the hallmark of life in Alice Springs. 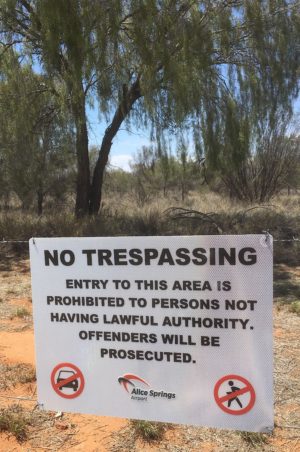 Given the region’s stock carrying capacity of two beasts per square kilometre, the commercial value of that land is infinitesimal, while the risk of erosion and creating a dustbowl are very real.

Yet it could be a “welcome to the Outback experience” for tourists, in immediate vicinity of the town, and restore for locals the feeling of being in the wide open spaces which brought many of them to The Centre.

Scott Allen, Director of Technical Services of the Town Council, says with respect to potential landfill expansions: “Council is continuing to work through the process with relevant stakeholders.”