Air traffic: Looking down on Alice 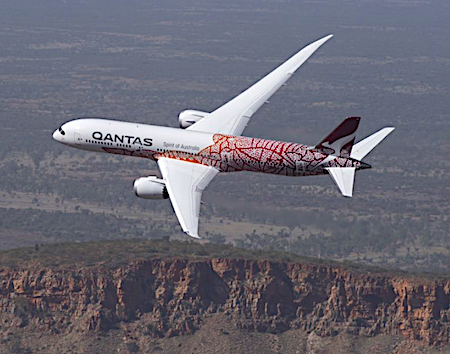 Qantas is sharply reducing services to and from Alice Springs while increasing its direct flights from around the nation to Ayers Rock Resort.

The move is praised by Tourism Minister Lauren Moss who is keeping silent on the impact of the changes may have on the tourism business in The Alice.

The airline’s flights between Alice Springs and Perth will be reduced from seven to two a week, and Qantas will cease flights between Cairns and Alice altogether, pointing out that connections are available via Ayers Rock Resort.

There will be cheaper flights for Alice Springs residents – so long as they want to go to Darwin. There is no mention on the Qantas website about the huge fares it charges to anywhere else.

Discounts to and from Darwin of up to 30% are available now “for personal travel” for up to 12 return flights a year, says the Qantas website.

These are clearly not available for flights paid for by the taxpayer.

However, bureaucrats and politicians commuting between Darwin and Alice will no doubt be pleased that Qantas is introducing “Business Class and inflight entertainment, including fast, free WiFi on selected flights” flying that route. (We are checking with the government who in the NT public service and instrumentalities qualifies for Business Class, and which politicians.)

Qantas says it will launch two new routes to Uluru (Ayers Rock Airport) from both Darwin and Adelaide – providing more opportunity for tourists to The Centre bypassing Alice Springs.

This is not stopping Minister Moss from gushing that the “announcement from Qantas was a continued vote of confidence in the NT and proof that the NT Government’s ongoing focus on attracting more holiday and business visitors to stimulate the economy was paying dividends.

“Research by the Department of Tourism and Culture earlier this year showed that 68% of travellers from Asia would consider taking a direct flight between Darwin and Uluru. 49% of interstate and international visitors to Uluru also spend at least one night in Alice Springs, so more flights into Uluru is good news for the whole of Central Australia,” Minister Moss says.

That’s fewer than half of the visitors to The Rock including Alice.

“We have been advocating for some time for a direct Darwin-Uluru service because of its potential to deliver a significant tourism and jobs boost in both the Top End and Central Australia. It’s great to have Qantas respond to that call”.

Qantas Domestic CEO Andrew David makes it clear that direct flights from around the country to Ayers Rock Resort is where the money is: “Uluru is in more demand from international and interstate tourists than we have seen in a long time. In the past few years the Qantas group has added new routes and more flights to Uluru from Brisbane and Sydney and now Adelaide and Darwin.”

Changes to the Qantas and Jetstar network are at the expense of regional Territorians in Central Australia.

I am disappointed at the timing of the announcement and the lack of prior consultation regarding the detail of the changes with key stakeholders here.

Key stakeholders have expressed similar comments on social media and radio interviews on the ABC.

The discounted fare offer and increased capacity for leisure travel to Darwin is welcomed but Centralians are constantly traveling to other capital cities paying premium prices for airfares and there is no discount on these fares.

There will now be less capacity for Centralians to travel directly to Cairns and Perth.

I am arranging a face to face meeting to be fully briefed on the detail of the changes and impact on Central Australia.

I can appreciate that Qantas have made  these route changes to increase inbound tourism into the Territory and the NT Government is supportive of those changes and there will be increased economic benefit to Yulara and the rest of Central Australia, but Alice Springs will have less capacity to access Qantas flights as of April 2019.