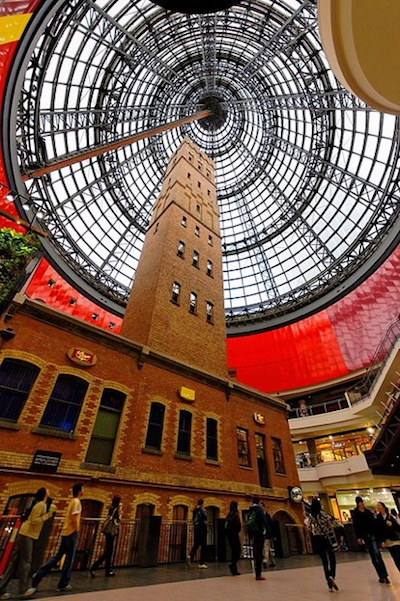 In the grand scheme of things the Coles Mural may not be a big deal, except it’s a scary subject lesson in the fake democracy we live in.

It also raises titillating questions: Lauren Moss is the arts minister who wants to bulldoze the Anzac Hill highschool so she can build the national Aboriginal gallery on the site.

She is also the heritage minister, obliged – one would imagine – to assess on its merits the heritage listing application for the school by Alex Nelson, a member of the Heritage Council. Small world.

SPIN: No worries, Mr and Mrs Public. We are from the Heritage Council and we are here to help you. We’ll protect the few remnants of what makes your town special – to our very last breath.

A lively debate ensued in the pages of the News, including comments from Domenico Pecorari, a heritage architect in Alice Springs for decades and the applicant for the mural’s heritage listing.

He makes a strong case for the variety of ways historic items can – and are – being preserved, especially in his comment of November 6, 2018 at 3:31 pm.

In the case of the Coop’s Shot Tower (pictured) in Melbourne that includes creating a dome to protect it, he writes.

And this is where the charade of being a democracy becomes blatant: No further comment from Mr Kraft and neither from Ms Moss, both having retreated behind the walls which a Budget of about seven thousand million dollars a year of taxpayers’ money can buy. ($675,000 of that went to running the Heritage Council in 2016-17.)

We put the following questions to Mr Kraft, copy to Ms Moss, but received no answers:–

As you saw from the Minister’s reply there was only one response in the 28 day comment period, namely from the owner of the building.

No doubt you had access to that reply, and it was part of the matters considered by your council in its formulation of a recommendation to the Minister.

The statement on her behalf, which we published, says the Minister had two reasons to deny the listing which your group recommended:-

• Because “it would be an unreasonable imposition on the owner of the building on which the mural is painted to have it permanently protected by the Heritage Act”. Is it fair to say the Heritage Council  does not share that view, as its recommendation suggests?

• The “mural has been carefully documented as part of the process of assessing its heritage significance”. No doubt the council would have been aware of that as well. In what way should “careful documentation” be the reason for exposing the mural to destruction?

Do you agree it is reasonable to say that the minister and the [Heritage] Council are at odds on the matter, having come to their respective [namely opposite] conclusions on the same evidence?

The Minster has the legal power to overrule your council (and she did) but does she have the moral right?

Does the Heritage Council represent the public?

If so, should its recommendations prevail?

Under what circumstances should they not?

If not, what is the point of having the Heritage Council?

Was the council’s decision on the mural unanimous? (The News understands it was.)

Where and how was the 28 day public expression period advertised?

Does the council directly inform obvious stakeholders of matters that are before it for recommendation, in time to make comment ahead of a decision, such as, for example, Heritage Alice Springs?