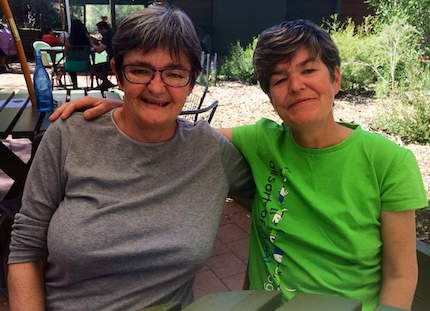 By KIERAN FINNANE
Last amended 1.24pm, 11 November 2018. Headline changed and story altered to remove reference to this wedding being a “first”. Not so, as readers have pointed out in the comments below. Alice Springs News Online apologises for the error.

Updated, 11 November 2018: Photos from the wedding at bottom.

One year after the historic yes vote for same-sex marriage in Australia, and after 14 years of living together Maureen Hatton (at left in the photo) and Liz Archer (at right) will marry.

It was Maureen who proposed.

“Why?” asked Liz, who had never wanted to marry.

“Because I love you,” was the simple answer.

That was all the reason Liz  needed to say yes.

But as they thought more about it, she and Maureen also agreed that, having finally won the right, they should use it, and by making it publicly known “make it count”.

Family and friends will gather for a ceremony and reception at the Star Of Alice this Saturday, with well-known local marriage celebrant Meredith Campbell officiating.

The message will be simple: “We’re happy together, and so are our family and friends, for us.”

How times have changed, says Liz.

Both women grew up in conservative rural environments. For Maureen, her lesbian life was entirely private until her girlfriend of the time “outed her” to her mother. She was initially horrified, but by the time Liz came into Maureen’s  life, she had come round.

Her own mother had also come a long way since she’d first taken Liz to the parish priest to discuss her “problem”. For the priest, homosexual ideation wasn’t the issue, but rather sex outside marriage. As her mother didn’t have a problem with that, her worry for her daughter dropped away.

In Adelaide and later in Alice the support of her “women’s community” was very important for Liz, but there could still be times of feeling unsafe.

Back in 2001, there was uproar in town when the Centralian Advocate ran a front-page report that there would be a Sydney-style gay and lesbian mardi gras here. What was planned in fact did not involve a public parade, but that didn’t stop the hysterical opposition in sections of the community to the Alice is Wonderland Gay, Lesbian and Friends Fun Festival.

“It was hurtful,” Liz recalls. “Our community received a huge amount of flack. People had their rubbish bins turned over, found nasty letters in their letter-boxes. On the positive side, we all banded together and saw one another through.”

Less than two decades later, a majority of Australians, including a majority of Territorians, voted yes in the same-sex marriage survey and the Australian Government legislated the change: the Marriage Act now defines marriage as simply “the union of 2 people to the exclusion of all others, voluntarily entered into for life”.

After Saturday’s formalities, the legal status of Liz and Maureen’s marriage will be identical with that of any couple.

The cultural shift has been profound. Today the idea of a local gay and lesbian festival is uncontroversial. Last month the Town Council unanimously backed sponsorship in cash and in kind of a local gay and lesbian Queen of the Desert festival, set to become an annual event. This appears not to have attracted even a murmur of dissent, whereas in 2001 the council was seriously divided over Alice is Wonderland and a petition protesting the event gathered 830 signatures.

Since making known their marriage plans, Liz and Maureen have received only congratulations and good wishes, which has further cemented their intention to remain in Alice Springs, where Liz is the Central Australian manager of Music NT and Maureen is in an advocacy role in aged care services.

They met at a Reclaim the Night march that Maureen organised soon after she arrived in town 15 years ago. Liz did the DJ-ing at the after party. Within a year they were living together.

Liz had come to town four years earlier, responding to the encouragement of her brother and sister-in-law. She had already fallen in love with the landscape; then she fell in love with Maureen. She has seen a nephew born here and helped grow up another one.

Maureen has an adult daughter, who is in charge of the decor for the wedding: “She’s the queen of decor!”

The couple will exchange rings as a sign of their “love and belief in one another”. The rings are “a public confirmation” of that, says Maureen, while Liz embraces their traditional symbolism.

But there’ll be no white dresses or veils. Instead, Maureen will wear the top and Liz the bottom of the same “blingy” outfit.

There’ll be no name changes and they will continue to refer to one another as “partner”.

So when they wake up on Sunday, what will be different?

“We’ll each have a ring and very big bill,” laughs Liz.

Their love won’t have changed but they will enjoy the equality of its recognition. 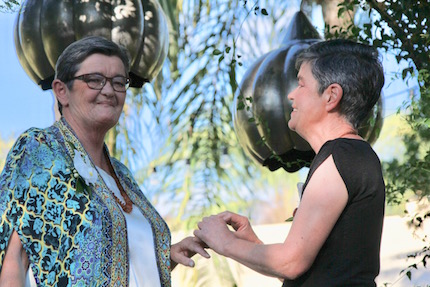 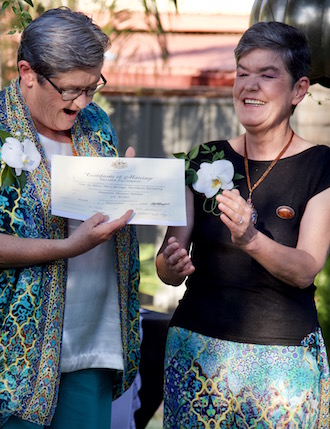