Home Issue 8 It's remote, desolate and worth billions
Issue 8Volume 25

It's remote, desolate and worth billions 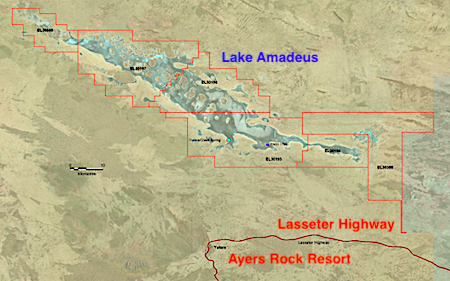 Flying to The Rock from Alice? Ask for a right-hand window seat: About half way you’ll see the Finke, the oldest river in the world, twisting its way out of the West MacDonnell Ranges.

Yet you’re looking at what could be one of the largest potassium brine deposits in the world, potentially worth billions of dollars.

“A project of this nature could provide substantial employment and royalties to both traditional owners and the Northern Territory,” says Chris Tziolis, Managing Director of Verdant Minerals Ltd.

The company, which has recently received green light for its Ammaroo phosphate project 270 km north-east of Alice Springs, has exploration licence (EL) applications over Amadeus.

This is at a time when many traditional sources of phosphate for fertilisers, including those at Nauru, are all but exhausted. 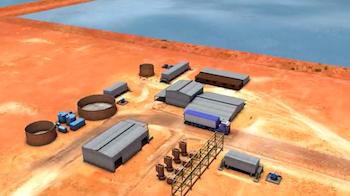 Sulphate of Potash (SOP) as well as magnesium sulphate are deposited in Lake Amadeus. They are used to make high-end fertilisers for crops sensitive to chloride or susceptible to fertiliser burn: Apples, tomatoes, the list is long.

Australia currently imports all of its potash requirements.

Lake Amadeus is on Aboriginal Land. The traditional owners, in late June 2016, exercised their right of veto over exploration and development under the Aboriginal Land Rights Act for the ensuing five years.

After that period the Act provides for a system of external adjudication if an agreement is not reached. Aborigines stand to gain royalties of at least 10% under the Act.

Potassium salts could be produced from the brines (salty water) that lies in aquifers beneath the lake, says Mr Tziolis.

“It is not a mining project but rather the extraction of water that enables the product to be produced through solar evaporation and some processing of the remaining salts.”

The product could be trucked east on the Lasseter Highway, connecting up with the north-south railway, taking it to the Australian market, or via Darwin, to the rest of the world.

“The company’s longer term vision is that the phosphate and potassium resources of the NT can be developed, and combined with its gas, produce nitrogen based fertilisers to create a Northern Territory based integrated fertiliser industry, serving the growing needs of both Asia and Australia,” says Mr Tziolis

Although the deposit is not as thick, the precious product also occurs in a string of “salt lakes” known as Karinga Lakes stretching from the eastern end of Amadeus all the way to the Stuart Highway, paralleling the Lasseter Highway.

Verdant has an EL application over that territory as well, as it has over Lake Frome, on the South Stuart Highway in SA.

Between those patches the company could be putting The Centre on the world map, at least so far as providing vital necessities for growing food are concerned.