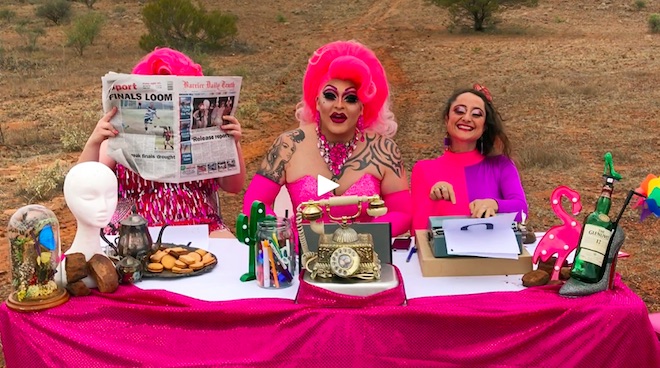 Above: Still from a promotional video for Broken Hill’s festival (bhfestival.com). Alice’s edge would be in following hot on the heels of the Sydney Gay and Lesbian Mardi Gras.

The blokes include Dave Batic, local head of the Chamber of Commerce, and Ric Farmer, owner of the Yubu Napa gallery in Hartley Street, who last night appealed to the Town Council for financial and in-kind support.

Broken Hill, also a Priscilla destination, got ahead of the game, launching its Queen of the Desert Festival, AKA the Broken Heel Festival, in 2017.

It is held in September, whereas the Alice event is planned for early March, hot on the heels of the hugely successful, annual Sydney Gay and Lesbian Mardi Gras.

The organisers hope to leverage off the high international visitation to the Sydney event. More than half of these visitors extend their trip in Australia, at present mostly going to Queensland, said Mr Batic, optimistic that Alice Springs could capture a slice of that market.

The concept seems very similar to Broken Hill’s, three days of exuberant performance and partying, homage to the movie, which is internationally recognised by the LGBTQI community, DJs, drag kings and queens.

It would be good for the town’s and the Territory’s image, Mr Batic suggested, fitting in with the NT Government’s marketing pitch of “boundless possible”.

Alice is perceived as “a bit backward, behind the times”, said Mr Farmer. The festival, as a  “statement of pride, diversity, acceptance”, could change that as well offer support for local business, and stimulus to local creativity and event production.

He said the program would be “respectful and acceptable” to the broad community, and suggested adding ‘A’ for ‘Allies’ to the LGBTQI acronym, to describe its core community.

The emphasis would be on marketing and building the future of the event, which by 2029, the 35th anniversary of the film, could attract 5000-6000 visitors, contributing between $9 and $10m.

He based his projections on data from the Broken Hill event, and also referred to the success of the annual Elvis Festival in Parkes, NSW, attracting some 25,000 visitors.

Council is sold, agreeing to sponsor the inaugural event with in-kind support and cash sponsorship of $10,000.

Councillor Eli Melky said he is a “big fan” of the movie. He welcomed the inclusion of ‘A’ for ‘Allies’, considering himself one. He said he was proud to have in his family four men who “have chosen their pathway” [as gays] and, getting perhaps a bit carried away,  spoke of his wife being far more worried about his close relationship with his male business partner than about any other woman.

He did also have some questions about the dollars and cents, as did some of the other councillors.

Cr Jimmy Cocking asked about engagement with the local gay and lesbian community.

Mr Farmer agreed this would be critical. The festival would be “first and foremost for our community here”.