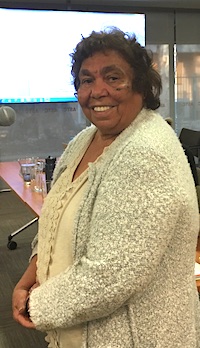 The Town Council tonight rejected unanimously what amounts to a letter of demand from the NT Government to hand over Anzac Oval.

The letter, signed by MLA for Braitling Dale Wakefield and Minister for Culture Lauren Moss, is asking for the “transition the Anzac Precinct site” to the government “to allow for the development of the National Aboriginal Art Gallery”.

They say the site would be made up by the Anzac Oval, which is owned by the council, and the old Anzac Hill school site, which is owed by the government.

All eight elected members who were present at the committee meeting, including Mayor Damien Ryan, voted against the five points in the letter.

As the issue could be regarded as an urgent matter, CEO Rex Mooney said he was empowered to treat the vote as final decision without it having to be put before the ordinary meeting in two weeks’ time.

Cr Matt Paterson said he was casting a no vote “reluctantly” but he didn’t want it to be a seven to one vote.

The other councillors left no doubt about their outrage over the government’s handling of the gallery plan.

Cr Jamie de Brenni was chairing the debate. He said the council tried to guide the government, “how to do it, how to move forward. I don’t see our recommendations here,” referring to the letter from the Ministers.

“I personally feel we reject all five points.”

Cr Jimmy Cocking said the government, in its consultation, was looking “for the yes people”. He objected to the suggestion of running the gallery planning similar to the “reference group established to provide cultural advice on the development of Parrtjima”.

His comment came after earlier in the meeting Doris Stuart, one of the town’s most senior elders, had made an impassioned plea for “the right person, not anyone with a black face” to be consulted: “Here you go, here is your money.”

Mayor Ryan said: “We set up a meeting, asking to work with the government. We had the meeting, these are the key points they raised, it was released to the press half an hour after we received the letter.

Cr Glen Auricht was fuming: “They have completely ignored us as a council, speaking for the community.

“They actually demand that we give up the oval for them to do what they like, before there are any plans, any consideration of what the ratepayers want.

“Just wiping out that big car park there, across Wills Terrace which is used a lot by people attending the Catholic Church and other functions … for the seniors group, for the people going shopping.”

He said “we need to consult with the traditional owners – Mrs Stuart, Harold Furber” who also spoke earlier in the meeting.

About the government Cr Auricht said: “I just don’t believe a word they are saying. They are just trying to put as up against the wall to be shot by everybody.”

“There is no real vision,” said Cr Jacinta Price. “This letter tells us that it’s basically council’s fault not having put up any other locations on the table. But their very own steering committee had already presented recommendations at the very beginning of all of this.

“We’ll have a rush job instead of something significant and meaningful – a wonderful icon for the whole of Australia.”

Cr Catherine Satour she had expressed support for the gallery to be in Alice Springs, but she is against the use of Anzac Oval.

The five points proposed by Ministers Wakefield and Moss include “considerable car parking and open green space and [the precinct] will be available for events and general community enjoyment”.

Rugby league and union would get an alternative site “subject to that transitioning of the Anzac Precinct to the NT Government”.

“I wonder what’s going to be in the next letter,” concluded one Councillor.

The Labor government’s heavy-handed approach to the National Aboriginal Art Gallery has failed spectacularly and further plunged the project into uncertainty.

The unanimous vote of Alice Springs Town Council reinforces the sharp divide between the government and the local community.

This gallery belongs in Alice Springs, but due to the mismanagement of two Ministers, South Australia is forging ahead with its plans.

I continue to be concerned about this Labor Government’s bully boy tactics and its arrogant “we know better” approach to Territory projects.

The threat of compulsory acquisition reeks of desperation as Labor tries to fix its failed attempt to deliver what should be an iconic landmark for Alice Springs and the nation.

The Territory Opposition supports this project being built in Alice Springs, not Adelaide and not anywhere else in Australia. The Northern Territory is the rightful home of this gallery.