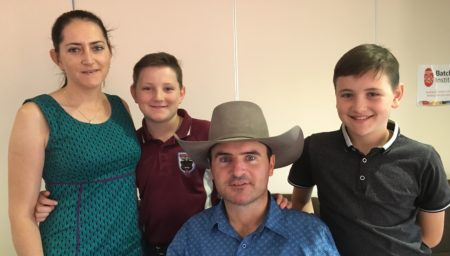 “There was a period through that day when my breathing became laboured and of course I was instantly paralysed.

“It was one of those moments when you pass on your last message to your loved ones. I was trying to get the words out to dad, if I don’t make it, tell Sarah that I love her.

“I decided in the same instant that was the coward’s way out.

He did and still does, having “married my sweetheart 15 years ago” who “was there, wearing make-up, with a big smile on her face” sitting by his bedside during three months of intensive care, after a mustering helicopter crashed in which Rob Cook was a passenger, just over 10 years ago. 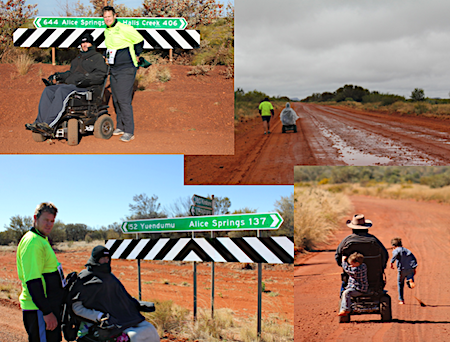 He now has control over two parts of his body: His head, full of ideas shining through his bright eyes, and his right biceps, which controls his wheelchair and – crucial for a man on the land – operates a gadget he designed to open and close gates.

A lesser man would have thrown in the towel. Not the former rodeo rider, fencer, cattle man, mining explosives expert, pilot and, above all, husband of Sarah and father of two boys, Braxton, 12, and Lawson, 10.

The accident wasn’t the end of his life – it was the start of a new one.

The family took a break from their life at Suplejack Downs Station, 700 km – or nine hours – north-west of Alice Springs.

The four moved to Queensland and started their own cattle business on 2000 hectares – tiny by the standards of Suplejack’s 3,823 square kilometres. 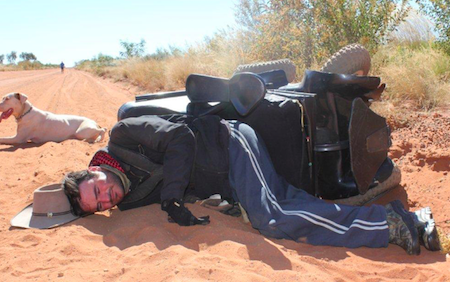 There were laughs as well: The family has long distance endurance feats in their blood.

His sister, Tiani Cook, is due in Alice Springs today, on horseback from Glen Helen, promoting Horses for Courses.

Mr Cook rode a 4WD wheelchair all the way from Suplejack to Alice Springs, mostly on dirt roads.

One day he hit a soft patch, tipped over and lay helplessly on the ground, unable to move, of course.

His wife’s dog, Chase, licked the ants from his face. He said to her: “Get help” and she did – or so he thought.

Help arrived, in the form of members of the travel party, and he lavished praise on the clever canine.

“It was a Kodak moment,” says Mr Cook. But the photo showed the dog had been sitting behind him all along.

Wheelchair-bound Mr Cook won a Nuffield scholarship and flew around the world, studying the beef industries along the way.

Drought proofing, a buzzword during the current dry spell, was uppermost in the minds of Sarah and Rob Cook. 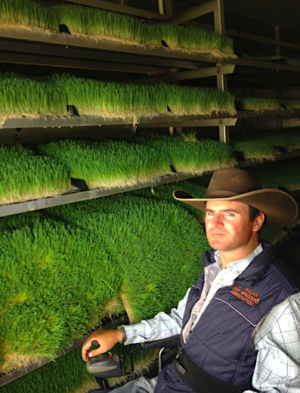 Central Australian pastures have a carrying capacity of two beasts a square kilometer. In their Queensland fodder shed, half the size of a tennis court, the Cooks produce their own fodder.

“We put 400 kilograms of raw grain on trays and add water and over a five day period it turns into a tonne and a half of sprouts.

“We mixed that with hay we grow on our farm and sweet potato growing in the Bundaberg area,” says Mr Cook, addressing Alice business people as part of the October Business Month this week.

Building up a “little, run-down” butcher’s shop came next, but Bundaberg turned out not to be the right place for that, and it’s now collecting cobwebs.

“You’ve got to be realistic. We cut our losses. We got out of retail and went back into what we love, and that is fattening beef.”

The Cooks are now using  innovative cattle weighing equipment, known as a remote livestock monitoring system. And his extraordinary life has made Mr Cook a sought-after motivational speaker. 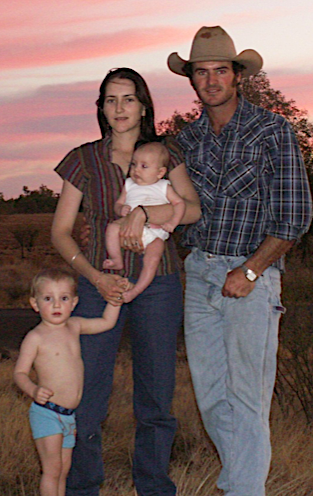 “Innovation comes down to a mindset. Tomorrow, when you wake up, you put your boots on, and as everyone knows, the hardest step in a journey is the first one,” he says.

He has the support of a big, close-knit family.

“If you can picture a bloke hooked up to a life support system, pipes hanging out of his body everywhere, and his mother leaning over him and saying to him, hey, Rob, no-one can go back and start a new beginning. But anyone can start the day and create a new ending.” 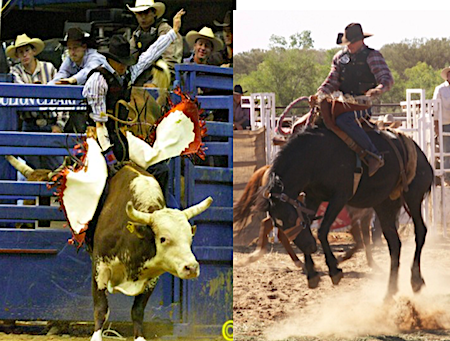 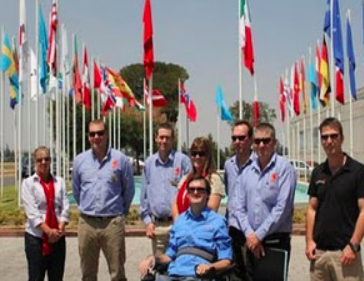 Mr Cook with other Nuffield fellows. 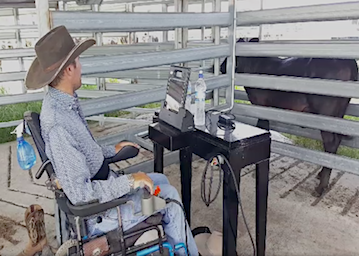 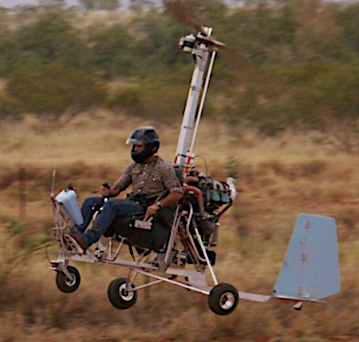