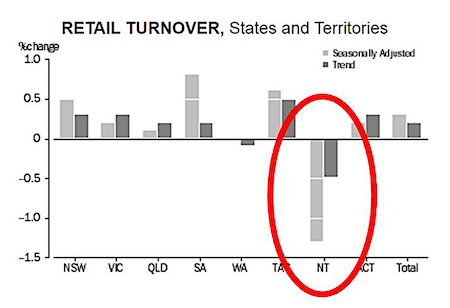 Sir – The Territory economy continues to fall behind the rest of the country, as confirmed by the latest Australian Bureau of Statistics (ABS) figures, released overnight.

Coupled with a decline in both visitation and spending from tourists, the Northern Territory’s economic landscape is simply getting worse.

The terrible statistics reinforce the hard truth that is already very familiar to Territorians and local businesses.

The latest ABS figures are taken from our dry season August period, which has historically been a busy time for the retail sector. To see such a sharp decline is very concerning and reinforces the perilous state of our economy.

Tourism, an important part of the Territory’s economy, has also waned as the NT is the only jurisdiction to have suffered a double digit decrease in visitation and spend.

In Alice Springs, tourism earnings are down 22%, reinforcing that the government’s much hyped tourism spend has not converted to results and visitation.

Despite the rhetoric, Labor has been completely ineffective in managing the Territory economy for two years, and it’s Territorians that are paying the price.

Gary Higgins
Leader of the Opposition