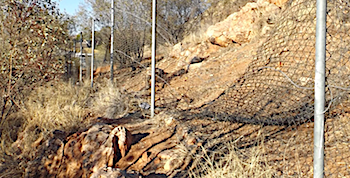 The trashing of part of the old high school at Anzac Oval, the NT Government’s preferred site for the Aboriginal art gallery, was a situation just begging itself to happen.

The school is now used by the St Joseph’s Flexible Learning Centre. For months the fence on the lower slope of Anzac Hill has been practically demolished.

I first noticed this about March this year. On Sunday afternoon, September 16, I walked along the boundary fence and found it was in even worse condition than six months ago.

I happened to be there when a large number of youths were entering the grounds of the school.

They came in from two directions, Anzac Oval and the hill.

The youths on the oval simply hauled themselves over the top of the oval’s boundary fence, and they called for their friends sitting higher upslope on the hill to come and join them. One of them was carrying a baseball bat. 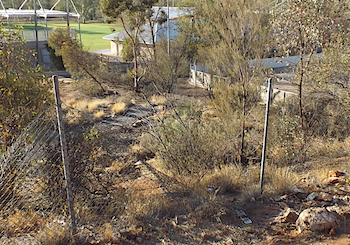 As I wasn’t carrying my mobile phone, I went straightaway to the police station to report what I saw.

I also picked up a stolen backpack and associated possessions next to the boundary fence and handed that to the police, too (the owner of the stolen articles worked for Correctional Services!).

The auxilliary officer at the station recorded all my information and contact details, and that was the last I heard of it.

Whatever the NT Government’s attitude is towards this old education complex, it remains a public asset and as such it is incumbent upon the relevant authorities to ensure its protection.

As the learning centre will commence relocating to its new facility at the former Batchelor College property in Bloomfield Street this week, the old school will in effect become abandoned and clearly vulnerable to further depradations of vandals.