Gallery: Council did not say boo 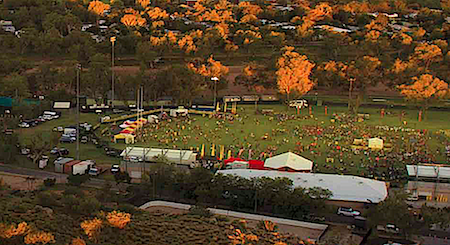 The Town Council’s fumbling of the Indigenous art gallery project reached a new low at 7am on Friday last week, according to several sources.

Mayor Damien Ryan and all councillors except Jacinta Price met behind closed doors with NT Ministers Dale Wakefield and Lauren Moss, accompanied by minders and bureaucrats.

The ostensible purpose was to acquaint the council with results of the government’s so-called community consultation about the gallery – an effort widely seen as dubious.

All council elected members had the day before received the results of the council’s own public poll on the use of Anzac Oval for the gallery, a decisive 58% to 42% rejection of a change of use for the oval.

Yet neither the Mayor nor any of the councillors told the government reps during the meeting that this put paid to the use of the Anzac precinct as their “preferred” site.

The council had put the question before the public in the form of a poll as the result of a unanimous vote, .

The case clearly could have been made that having received a response from the public, council is now obliged to honour it.

More than 2000 people took part the council’s opinion in the poll. Only 755 participated in government’s “engagement” with members of the public who could have had little doubt that this process was designed to convert them to the government’s views, not to objectively canvas the public’s views.

Cr Eli Melky has since foreshadowed a motion for the September 24 council meeting seeking to ensure that Anzac Oval remains in the council’s (and community’s) hands.

The issue may also be raised under other “business” in the council’s forum on Monday which is not open to the public.

We are seeking comment from Mayor Ryan, and Cr Jamie de Brenni, who at the council committee meeting last Monday  cut short a discussion about the issues, despite a significant turnout by keenly interested members of the public.

Anzac Oval ‘change of use’: council gives constituents the brushoff

Gallery at Anzac: Council has no position, says Deputy Mayor