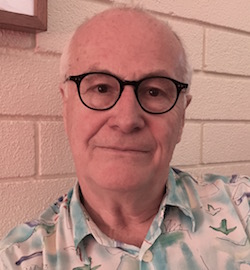 By KIERAN FINNANE
Updated 10.15am, 10 September 2018, with additional reporting of this interview. See below, ‘Adelaide versus Alice’.


Inconspicuous in the Desert Mob opening crowd was Michael Lynch (left), member of the original steering committee for the National Aboriginal Art Gallery.

He remains hopeful, even optimistic about its realisation even as he expresses incredible frustration about the way the committee and its report have been dealt with by the NT Government.

“It’s as bad as anything I‘ve ever had to deal with,” said Mr Lynch, describing himself as “old, ugly and experienced”, a veteran of 40 years in arts administration, chief executive in leading institutions, most recently the West Kowloon Cultural District in Hong Kong and previously the South Bank Centre in London, and director of the Sydney Opera House among others.

He said he has not heard once from the government since doing the work “they asked us to do”. They seem to have “dropped us into an oblivion bin”, while going ahead with the project “completely disregarding the two most important recommendations we made”: these were that the project be “Aboriginal led” and that it be “on a site recognising the importance and distinctiveness of the project.” The committee’s “unanimous judgement” was that that site was the Desert Park.

With the government looking set to push forward with its preferred location at the Anzac Hill precinct, I asked Mr Lynch whether he thinks it can be made to work.

“Absolutely not in my view. To make a national institution in this town, you need to take advantage of the fact that you are in the remotest part of Australia. The idea that you can whack a museum in the middle of existing facilities to satisfy a half-arsed notion that the Chief Minister has that this will solve all the social problems of Alice Springs is naive and politically immature.

“You only have to look at MONA in Hobart, but you could look at lots of other examples, having a space that is distinctive, reflective of country is fundamentally a principle that has to underpin this institution.

“Plus, galleries and flood plains often don’t go well together!

“The Anzac site in my considered view is totally inappropriate.”

For the last six months Mr Lynch has been involved with Adelaide Contemporary, the project that is seen, by the NT Government at least, as potentially eclipsing the Northern Territory’s chance of hosting a national Aboriginal art gallery. He chaired the international design competition jury that chose the winning design for the gallery that will be built on the former site of the Royal Adelaide Hospital.

Above: The winning design for Adelaide Contemporary by Diller Scofidio + Renfro and Woods Bagot.

This was initially a project by the Art Gallery of South Australia (AGSA) focussing on contemporary art, which was “always going to have high level Indigenous involvement” but not exclusively. Its Indigenous focus became an election campaign promise of now Premier Steven Marshall – so it’s been a  “similarly political decision”, said Mr Lynch.

He does not see the NT and SA projects as necessarily exclusive of one another. And the Alice project had a head start, even if it continues to get eroded by the government’s bungling.

The Adelaide project “was never as resolved as what we had proposed with the Alice project.”

Discussions in Adelaide are ongoing, with the concept in a “state of some flux” as to its funding and reporting arrangements. Mr Lynch says they are looking at whether Tandanya (the National Aboriginal Cultural Institute) can work with the South Australian Museum and AGSA “to find a way cooperatively to do something together with central focus on Indigenous art” at the same time as meeting the “aspirations of the art gallery, and doing it in a way that shows proper deference to Indigenous communities”.

“That hasn’t been done in South Australia before and clearly it is a struggle here in the NT.”

It has also been the stumbling block in other attempts that Mr Lynch has been involved with, to put Indigenous institutions in capital cities – he mentioned, for instance, one thought about for Barangaroo, a harbour foreshore development in Sydney.

Various projects were “never able to win support of Indigenous communities because they never went through the necessary steps.

“If you’re a mining company, you know how to do it. They’ve learnt at their expense, if you don’t do it the right way, you won’t make the billions you’ve been able to pull out of their land.”

Now the Alice project too has become “a battleground for bureaucrats and politicians” and the Indigenous community are its “collateral damage”.

Mr Lynch said there seemed to be an assumption by the Territory Government’s people, that he and Mark Wilsdon, co-CEO of MONA, “the two white guys” on the steering committee, would take “a divergent view” from the Aboriginal representatives  – “no way”.

“This is microcosmic of why things often don’t work, white governments’ attitudes towards Aboriginal people. How do we ever change the dynamic of white people telling black people how they should live their lives, run their institutions?”

Mr Lynch stands by the steering committee’s report, which the government “forced us to do within six months under intense pressure”.

He said the bad turn the project has taken is “largely attributable to the Chief Minister”, as Minister Moss went on leave during the committee’s deliberations.

“The Chief Minister told us to consider that site [the Anzac precinct], and we did, but they weren’t ever serious about listening.

“From that perspective, the experience has been immensely frustrating.”

He is also particularly disturbed by the “lack of respect” shown to Hetti Perkins as co-chair of the committee, describing it as “deeply mysognyistic” and oblivious of the respect due to the daughter of the late Charlie Perkins, whose state funeral at the Sydney Opera House Mr Lynch hosted.

Although he remains hopeful about realising the Alice project, he also said “all the good will and contact with people we had seems to have been lost”. He asked, “Who knows what will happen?”

The $50m that is on the table is “ the people’s money, not the government’s”, so “transparency is incredibly important, and it has not been a transparent project to date”.

Biographical note (as described for the Adelaide Contemporary jury) for Michael Lynch:

Michael Lynch was Chief Executive of London’s Southbank Centre from 2002 until 2009 and was responsible for the major renovation of the Royal Festival Hall and the transformation of the Southbank cultural precinct.

From 2011 to 2015 he was Chief Executive of the West Kowloon Cultural District, an ambitious project which will see a huge arts precinct built on the shores of Hong Kong‘s Victoria Harbour.

Michael is currently Chairman of Circa, Chairman of the Sydney Community Foundation, and a Board Director of Belvoir Theatre.