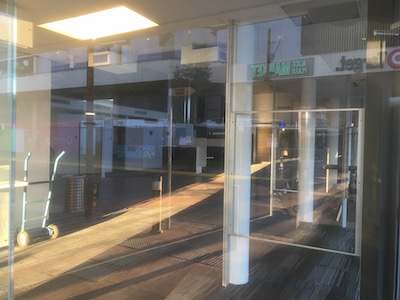 Activity in the Alice Springs Central Business District is basically a “moving of deckchairs”: existing tenants relocate, responding to the incentives of other landlords.

Left: The ANZ Bank has relocated from this prime Todd Street North site, opposite the Visitor Centre, to Gregory Terrace.

This was the unsurprising but stark picture of the stagnant CBD presented by Andrew Doyle, of the Real Institute of the Northern Territory, to the Town Council.

It is not unique to Alice Springs though, reflecting a change in the whole retail market across Australia, he said.

Deputy Mayor Matt Paterson asked if Mr Doyle thought the Aboriginal art gallery in the CBD or the Anzac Oval precinct would benefit the surrounding businesses.

This was a bit of a Dorothy Dixer, as Mr Doyle was recently quoted in a NT Government media release on the very matter, as he himself noted.

The gallery project is “critical”, he said, all businesses would benefit from increased traffic and patronage, the CBD would grow, and the economy would grow.

Councillor Jimmy Cocking asked what would be the impact of bringing residents to live in a mixed use CBD.

That too would be “positive”, said Mr Doyle, the Uniting Church’s proposal for the Meeting Place (which incorporates mixed residential, commercial and community uses) is “critical”;  such mixed use, as is seen in other cities around the world,  is  “a way of generating economic activity”. 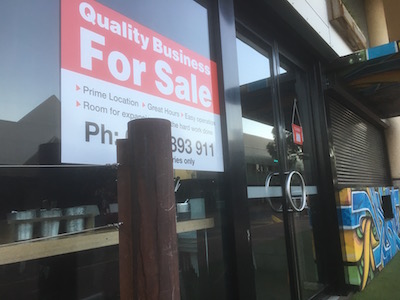 (A comparative analysis of the two different approaches to CBD revitalisation would be interesting.)

Outside of the CBD, an urgent issue is the provision of industrial land, said Mr Doyle.

Left: A relatively new business, Wicked Kneads cafe, is for sale.  It too is in a prime central site, at the intersection of Todd Street North and Todd Mall.

The release of the Western Precinct and Ghan Estate 10 to 15 years ago led to an oversupply  for a long time but that land has been taken up and there is now new demand.

A number of rural land-owners operating businesses outside of current planning restrictions are under pressure to find commercial or industrially zoned land.

He said the product they require – 7500 sqm allotments – simply isn’t available in the local market and government needs to address this.

A case in point: Cr Glen Auricht had noticed that Stanes Transport has erected a sign on the old drive-in site (below). Is that land zoned for industrial use, he asked?

Mr Doyle said the company has been given DCA approval to operate there.

(Alice Springs News Online made further enquiries about the availability of  7500 sqm allotments. See additional reporting by Erwin Chlanda at the bottom of this story.)

In the housing market, Mr Doyle said there had been neither contraction nor growth over the last three years.

There is good strong demand for well presented, well priced houses but the unit market is struggling.

Cr Eli Melky, disclosing that he a member of the REINT, put to him that this is down to increased body corporate costs which reflect increased insurance costs, increased rates and a declining population.

Mr Doyle agreed on the first point, to a degree on the second although houses and units get much the same level of service for their rates, but not on the last. He said housing demand is generated within the local population, as children grow up, leave home, rent and then buy.

He hoped the NT Government would look to extend their First Home Buyers Grant, due to finish by the end of September. It is available for existing houses, covers stamp duty and provides up to $10,000 for renovation, which must be spent with local contractors: “a very worthwhile policy”.

There is pressure on rentals, mainly due to increased demand from Pine Gap employees, not those who work for US Government, but for the private contractors who must now find their own accommodation.

A company, AECOM,  is taking up head leases on good properties in “private areas” to cater to this demand.

This has contributed to the vacancy rate dropping from 6-8% two years ago to around 2-3%. Historically, once the rate falls below 4%, you start to see pressure on rents to increase, said Mr Doyle.

There is also a squeeze at the bottom end of the market. One bedroom studio apartments on Stephen Road that used to be available for $220-250 per week, have been renovated and sold off – 68 of them. This has created a shortage of budget accommodation.

He would like to see Mt Johns Stage 2 released, or extension of the Stirling Heights or Albrecht subdivisions.

The NT department in charge of land administration is refusing to outline how industrial land at Brewer Estate, in the southern part of Alice Springs, can be obtained.

The issue has reached crisis dimensions with the creeping industrialisation of rural residential land in the farm areas, climaxing with the illegal use of a rural block, about 12 hectares, at Ilparpa by NT Link proprietor Tony Smith.

During the hearing of Mr Smith’s application for a transport terminal, since rejected by the Development Consent Authority, Member for Namatjira Chansey Paech stated that there was ample land for industrial use at Brewer and the airport (which is Commonwealth land).  He had run for election on a platform of putting an end to the abuse of rural land.

Alice Springs News Online, making follow-up enquiries, was told that there are 430 hectares available at Brewer.

After Mr Doyle told the Town Council on Monday that 7500 square metre blocks are not available we enquired further.

At 9.48am on Tuesday we emailed the “Communications and Engagement Unit” of the Department of Infrastructure, Planning and Logistics saying “wouldn’t that [land] be available at Brewer Estate? There are 4.3 million square meters. What’s the process of getting some of that?”

When we received no reply we phoned the department yesterday morning. At 12.13 – more than 26 hours after our first contact – we received the following reply: “Applications for land at Brewer Estate can be made to the Department by contacting crownland.alicesprings@nt.gov.au.”

We had made it perfectly clear to the media minder that this was an enquiry by a journalist, not a land developer, and asked for a reply to our original questions.

We still have not received any.