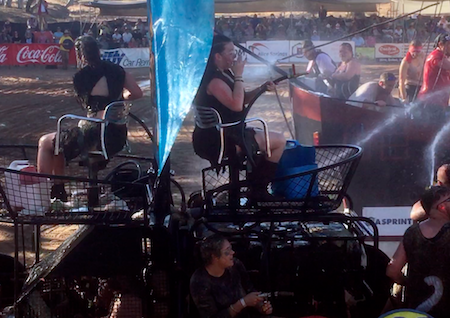 It’s official: The Henley on Todd is for kids.

True, some of them mostly pose as adults, they are leading citizens, movers and shakers and captains of industry, in the three Rotary clubs in Alice Springs.

But they have some things in common: A sense of humour. And the conviction that going stark raving mad at least once a year is good for your health.

Want to be a pirate? No worries. A Viking? Go for it. Dress up? Of course.

Commodore? Tony Jennison was this year’s.

The 60 or so Rotary members in three clubs, with the help of some friends – a lot of them, actually –  put the spectacle together, year after year, as much for themselves and their mates’ enjoyment, as for the 4600 or so spectators, an estimated two thirds of them tourists.

Most of them can’t believe what they are seeing. If you don’t, check out the video.

The regatta in the dry Todd River raises $30,000 for charity and Saturday’s was the 57th.