Gallery at ANZAC Oval decision has not been made 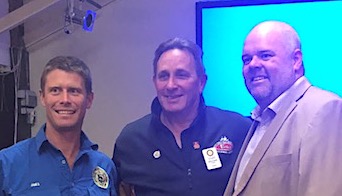 A decision about the location of the national Aboriginal art gallery has not yet been made, even if  the preferred site  is the ANZAC precinct, according to a member of the government’s team spreading the word on the gallery.

Scott Lovett, a senior official in tourism promotion, last night attended the meeting of the Rotary Club of Alice Springs upon request of the government.

He was asked by the writer (who is a club member): “Has the decision been made to build the gallery in the ANZAC precinct or is that still an open question?”

Mr Lovett said: “The Chief Minister and Minister Wakefield have said that’s the preferred site for the gallery.”

He proceeded to explain the current three month process of communication with the public and stakeholders.

When pressed to answer the question Mr Lovett said: “No, a final decision has not been made.”

His 23 minute address and Q&A focussed almost entirely on the ANZAC site, its advantages – principally being close to Todd Mall, a stimulus to its businesses – and how the site’s shortcoming could be managed: car parking; the ability to cordon off sections for such events as the Masters Games and Carols by Candlelight; flooding (the site would be raised).

Mr Lovett conceded that the town was practically unanimous in its wish to have the gallery, but the positioning was the major point of contention.

He did not elaborate on other sites, including the Desert Park – the only recommended site by the original steering committee –  Melanka, other CBD sites, and south of The Gap, Desert Knowledge and the privately owned square kilometre on the southern flank of the MacDonnell Range, running east from The Gap.

He said there are differing Aboriginal views about the ANZAC site but made no reference to some people advocating a location south of The Gap for traditional reasons.

In reply to a question Mr Lovett said, in the government’s view, the space around the Araluen Arts Centre is inadequate.

He said the decision to build two new rugby ovals had been made.

PHOTO: Rotary Club of Alice Springs president Michael Potts is flanked by guest speakers Mr Lovett (at right in the photo) and James Christian, from the Cattlemen’s Association, who spoke about its new training facility, drought in many parts of Australia, and how pastoralists in The Centre are dealing with it.