Chin up, says tourism pioneer: Go and sell it 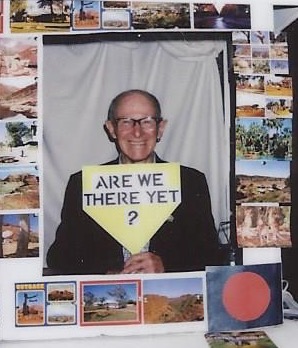 Early tourism in The Centre was born and bred here, with all the respect and credibility that attaches to anybody or anything “local”: You make your own fun, you build your own business, and if you don’t, nothing gets done.

At a rousing reunion of AAT Kings Tours and its predecessors last week, Keith Castle, as the guest of honour, looked back at the time when men and women created a new industry from the ground up.

There was no government involvement. The Territory was run by Canberra. The Stuart Highway south was dirt. So was the road to Ayers Rock.

You wanted a hotel, you built one. Same with a bus company.

Operators helped each-other, invested in joint ventures, made and lost money, but overall a new industry was born from resourcefulness, courage and an understanding of what the attractions – mostly nature – meant to visitors.

“You had to make the money yourself,” says Mr Castle. “It had to be done. It was a cooperative thing, we did not always agree, but the end result was good.”

Motels, each not unlike a bunch of sheds and dongas, were built at the base of Ayers Rock. Ross River and Glen Helen were created. They had bulk Outback atmosphere.

“In the 1950s it was an industry the majority of the local population knew little about and did not realise its potential,” Mr Castle told the reunion crowd.

It was well before NT self-government and the gaggle of highly taxpayer funded tourism promotion organisations had not even been thought of. 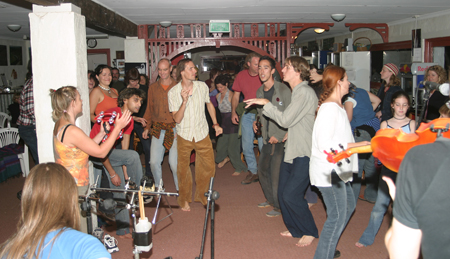 He says: “All promotion came from the operators, with assistance from TAA.” That was the Federal Government-owned Trans Australia Airlines.

Some further help came from South Australia’s and some from Victoria’s tourism bureaux.

“Each enterprise would be a story on their own, of what they did, how they did it, and what they achieved.”

Reginald Rechner was the SA and NT manager for TAA from 1947 to 1973: “He was very much aware of the tourist potential of the area and particularly its natural beauty and interesting locals.

“In 1958 he sent a telegram to seven operators, asking for a meeting in Alice Springs. It lasted 45 minutes and CATA was formed, with TAA becoming the sales and marketing agent being one of the resolutions.”

Everything pretty well started from scratch.

Visitors were flying TAA to Alice Springs – the hub of The Centre’s tourism industry.

Daisy and son Ly Underdown started tours to Palm Valley and Ayers Rock where Jack Cotterill built the Chalet. On a trip to the Chewings Ranges he discovered the tourism potential of Kings Canyon.

“He came to an arrangement with Arthur Liddle of Angas Downs cattle station to be able to build a chalet at Yowra Bore, 60 miles from the canyon, which was the nearest site with suitable water,” recalls Mr Castle.

“They blazed the road to the canyon.”

There were lively forming and expanding and modifying joint ventures between the dozen or so players in the industry. They also borrowed money from each-other when things went bad – usually just temporarily.

Five twin cabins “with shower and toilet facilities” were built at Ross River in 1960.

This is how Mr Castle recollects the start of the Elkira Motel: “In 1952 Harry and Joy Taylor visited Alice Springs as tourists and loving the town came back in 1954 and purchased a house in Bath Street.

“In 1956 they set it up as a guest house … and Harry started building a block of motel units. 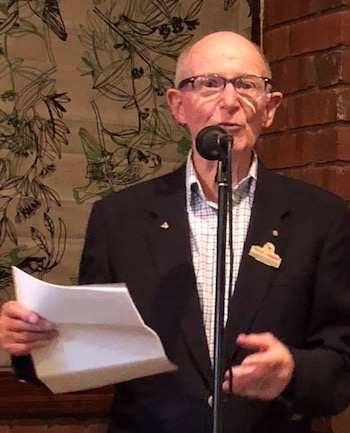 “Being the builder he made his own cement bricks after getting permission to move gravel from Gillen Creek and sand from the Todd River.”

Bernie Kilgariff, later a major figure in Territory politics, including being a Senator, “owned land on Gap Road, operating a chicken farm.

“In 1958 he cleared land at the northern section and a year later commenced laying the foundations for motel units” – to become the Oasis Motel.

“The bricks were made by Sandy, an Aboriginal friend of Bernie’s, also using sand from the Todd River and Gillen Creek.

“The units were twin bedded and with cooking and shower facilities but no toilets which were constructed nearby.”

CATA’s first season in 1961 was a “great success” with tours to the West MacDonnells, Ayers Rock, King’s Canyon and Ross River doing especially well, but the day tour to Santa Teresa was “disappointing”.

CATA had two 28 seater coaches built. A three-day trip to Darwin was started but it flopped. The CATA-owned BP service station purchased from Jack Cotterill in Alice Springs was losing money.

A brochure was printed and promotion trips by Mr Palmer to Adelaide, Melbourne and Sydney were looking good.

In 1962 Mr Castle became the manager of TAA in Alice Springs and with wife Shirley toured the CATA attractions of The Centre.

“This was a great help to me in the following years, by beginning to understand not only what the industry was all about but also the problems experienced by each member,” he told the reunion crowd.

A proposal to stop paying override commission [a booking fee] to TAA and the SA Government Tourist Bureau was accepted by them, a trust fund was set up, creditors also agreed to repayment conditions – and CATA was saved.

“In August 1966 the Castle family became one-third owners of Ross River,” recalls Mr Castle, and for four years he was “an apprentice in operating tourist accommodation, maintaining power, water and sewerage facilities, servicing buses, driving tours and managing the company.

“We even bought an industrial shed and tuned it into a three bedroom house with kitchen, living room and bathroom, and I did all the plumbing, sewerage and electrical wiring.”

His Ross River stint ended in 1972, selling his shares in it to avoid a conflict of interest as Mr Castle became the Executive Director of CATA.

From 1963 the company had slowly begun to trade profitably “although not making huge profits”.

More tours and beds were added as demand grew.

For example, in 1966 five international groups travelled to Alice Springs and Ross River (its cabins below right).

Over the years Ayers Rock was added as a destination.

“By 1991 we were handling up to 100 international groups a month in October and November and we were operating tours in every month of the year.

“Up to three a day were flying in as a result of CATA’s own international promotion.”

However, in 1972 it became clear CATA Tours (as opposed to CATA the accommodation business) was a “disaster” and a buyer had to be found. Greyhound made an offer in 1974 but went bust.

In 1976 TAA-Mayne Travel Industries bought CATA Tours, “all coaches and the debt,” and 12 shares in CATA delivering them a 51% share in the company.

“From that time until November 1983 CATA continued to expand and grow, the only real problems were to convince AAT directors in Melbourne that the locals in Central Australia had the expertise and knowledge to operate and manage tours in the Northern Territory,” said Mr Castle.

“For Shirley and me it was 30 years of exciting yet at times worrying and exacting times.

“CATA survived particularly well by the dedication and fantastic efforts of the staff who were in contact daily with the tourists.

“By those efforts CATA and Bill Kings were a success and became part of AAT which then became AAT Kings Tours.

Speaking to the Alice Springs News Online after the reunion Mr Castle said it was inevitable that Ayers Rock, with direct fights, would become the tourism centre from which tours now emanate – the opposite to Mr Castle’s time.

“You have to switch around your ideas,” he says. “You can cash in on that. Get off your bum and go out and sell it.”

He says from a 28 seater going to Ayers Rock once a day the CATA Rock business developed to an 85 seat Denning double-decker every day. Buses to Ross River and Kings Canyon were heavily loaded every night.

It was The Good Old Times with families, the vaunted “locals”, having control and benefits of the region’s biggest private enterprise business.

Fast forward to April 2015 when Tony Mayell, the NT Tourist Commissioner at the time, responded to a suggestion in an interview with the Alice Springs News Online that publicly funded promotion should favour locally owned operators.

Said Mr Mayell: “Let’s have a bit of balance on this item.

“Lasseters is owned by Malaysian interests, the Doubletree by a private individual who lives in Sydney, our biggest touring company in the NT, AAT Kings, is owned by a multi national travel business headquartered between Switzerland, South Africa and the UK.

“The largest backpacker tour operation in the NT is owned by a UK and European conglomerate, the Ghan is now owned by a UK investment fund management company.

“Our largest coach charter outfit in Alice and possibly in the NT is owned by a WA based company, a number of our rental car companies are owned by multinationals.

“If you’re advocating that we should only be promoting NT owned products then the inventory gets pretty skinny pretty quickly, and to be honest, we are no different to most other destinations throughout Australia in respect of foreign ownership. That’s the way the world is these days.”

And how are we doing now? On May 15 this year we started a story headed “Territory Tourism playing catch-up” reporting “Tourism in Australia is going gangbusters with 6% growth average across all states. But in the Territory it’s half that, 3%, with serious dips in the last couple of years.”

The tourism industry in Alice Springs had reached a peak by the time Mr Castle retired in 1992.

But he says today there are no grounds for pessimism: “The friendly people, the hospitality, the natural beauty – they’re all still here.”