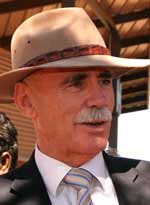 While it is always good to have Prime Minister’s visit this wonderful place you’d reckon he would have come here with a clear purpose in mind. That is not what happened.

In a stumbling bumbling interview on ABC radio he showed how ill prepared and poorly briefed he was for his visit.

He ummed and aahed his way through the interview, but was unable to respond to simple questions, although he did make it clear that he was not prepared to support legislation that would give Territorians the right to make laws that other jurisdictions are able to.

He then visited a local preschool where he didn’t reveal the fact that the Turnbull Government has made no ongoing commitment to the funding of universal childcare beyond the 2018-19 financial year, affecting 1986 children and the loss of $2.49m in Lingiari alone.

Nor did he address the broader cuts to education funding for schools and universities and in particular the Territory’s Charles Darwin University.

While being apparently prepared to discuss the NT Land Rights Act he made no arrangement to meet with the Central Land Council, a Federal Government statutory body, to discuss their role and responsibilities in working for the interests of traditional owners in the southern half of the Territory.

Nor did he apparently see the need to meet with any other of the major Aboriginal organisations in the town, including Tangentyere Council who are responsible for the town camps in the Alice.

Most concerning was his failure to organise to meet with the town camp women who were unable to meet with the Prime Minister in Canberra despite having travelled there to discuss issues of family violence and the welfare of their children.

He did not address the ongoing concern of Aboriginal Territorians for a national representative body or voice.

There are many other issues which he has studiously avoided addressing while here including the ongoing failure of CDP and the issues of housing and other infrastructure for town camps and remote communities alike, and the issue of roads.

He also again refused to accept the need for the Commonwealth to stump up dollars to address the recommendations for the Royal Commission into the Protection and Detention of Children in the NT, a Royal Commission which Mr Turnbull was a partner to calling and funding.