Home Issue 5 'A memoir of finding things, not just losing them'
Issue 5Volume 25

'A memoir of finding things, not just losing them' 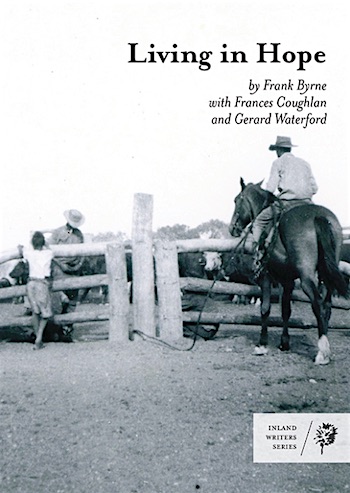 People find humanity where they can, even where inhumane logic rules. Frank Byrne was removed from his family by the Western Australian government on his sixth birthday. Recalling watching his parents recede into the distance, he tells the reader: “I think I went mad.” That bewildered boy grew to be a very sane and reflective old man, and with the help of Frances Coughlan and Gerard Waterford, he polished his memory of childhood until it is a little gem called Living in hope.

The reader is only four sentences into this book before Frank has warned the reader about what’s coming. To begin a memoir with that bewildering hurt risks suffusing every subsequent sentence with pain and loss, but Frank offers us the details of a childhood that was, at times, delightful.

Born on Christmas Creek station, he had a loving mother, Maudie Yoorungul, who worked “at the big house”, and two fathers. The ‘father’ who impregnated Maudie (and thus determined the course of young Frank’s life) was the horse-breaker, stockman and cook Jack Byrne – a man Frank never got to know.

The ‘dad’ whom Frank admired and loved (sometimes he calls him ‘my stepfather’) was the station’s handyman, the Walmadjarri hunter Jumargoo Lenbing. As Maudie was one of three women camped with Lenbing, “I had three mothers, and brothers and sisters.” In some stories of the Stolen Generations it is said that ‘Aboriginal custom’ spurns a ‘half-caste’ child. No such ‘law’ ruled Lenbing’s and Maudie’s generous hearth.

The station world – animals, yards, men, tucker from kitchen and bush – was immediately enjoyable for little Frank as a spectacle of adults’ action: making station roads by harnessing a donkey team to drag a log; bringing kangaroo, emu and bush turkey to the fire, to top up station rations (“I loved going hunting with my dad…[and] …us kids all had shanghais too”); sitting with the men, hearing them yarn; wet season ‘holidays’ on dad’s country. Somehow, dad “always knew what day to get back home for work”.

There was no need for a white head stockman, for men such as Lenbing knew how to run Christmas Creek. Frank deftly sketches an Aboriginal world that was subordinate yet fully lived.
In their many competencies – technical and social – these people had adjusted to what they could not alter. “What I knew, even as a small boy, was that no-one argued with a whitefella. People talked in whispers when whitefellas were present.” And from what he overheard, Frank sensed that soon”‘something terrible was going to happen”.

“Righto, you’re coming to Moola Bulla’”was the government man’s matter of fact announcement on the appointed day of removal. In his parents’ palpable fear Frank sensed that this was no ordinary truck-ride.
It was only a few days’ work for a public servant to convert this loved son of a station camp into a bewildered stranger, plonked down in the Moola Bulla mob. The manager’s roll call (the first of the young boy’s life) let him know that his name was Frank Byrne. What could this place offer? To the Gidja traditional owners of Moola Bulla the manager Alf George assigned goat shepherding, and Frank recalls that roaming packs of children shared in their milk and damper.

Food – how it was prepared and how to make sure you got some – figures prominently in this hungry kid’s survival story, and so – again – we read that “all us boys had shanghais”. One of the boys was Charlie McAdam, author of his own memoir (Charlie McAdam and Family, as told to Elizabeth Tregenza, Boundary Lines, Ringwood: McPhee Gribble Publishers, 1995).

In Frank’s account of Moola Bulla, whitefellas are barely mentioned, for what he recalls as “survival” was a matter of making connections with other kids and with adults who had “no choice” but to take responsibility for children without kin: “they had to become our mothers and fathers”. He names and profiles these kind folk, and the reader senses their importance: survival required love, not just food. “They were the only parents we had in them days.”

Perhaps Moola Bulla’s greatest hazard was petrol-sniffing. A good “growling” from “old Diddiary” eventually discouraged Frank and his mate from visiting the petrol-driven bore pump: “He saved us from that shit. We were lucky we had people like him who cared about us.” 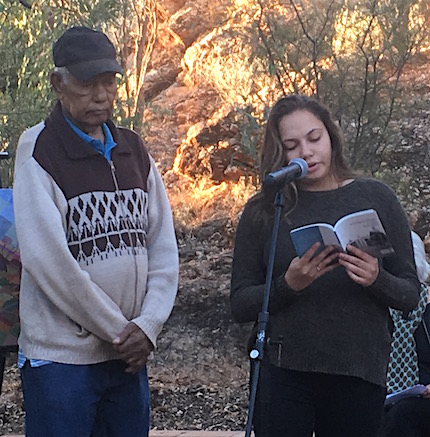 Moola Bulla governed the boys’ life more loosely than the girls’. Boys roamed, and so learned “all that traditional stuff” about fishing and hunting. Frank could sneak off to visit nearby Kunjie Park station where his aunty Dora was married to Ernie Bridge (snr). These relations gave not only food but advice: don’t try to run away from Moola Bulla.

Left: Frank Byrne at the launch of Living in hope at the 2017 NT Writers Festival in Alice Springs; his granddaughter Delphene Byrne is reading from the book. Mr Byrne passed away at Fitzroy Crossing on 23 November 2017.

Girls seem to have been much more confined; in their dormitory’s kitchen and laundry they learned domestic arts, and they ate together in a dining hall. Against the odds, Frank became mates with one “half-caste” girl, Frieda Wilson, joining her on the wood-heap with billy cans of food. “Something drew us together and I found it comforting.”

Western Australia relied on northern missions’ help in managing Aboriginal lives, and so the Moola Bulla manager one day without warning (and “like he was culling cattle”) sent excess children to the Beagle Bay Catholic mission. There was no chance to say good-bye. The truck loaded with kids had to pause at Christmas Creek, where Lenbing again got a brief moment to show how powerless was his love for Frank. His mother was not there, and this was not explained: “there was no-one to ask.”

The truck continued until it deposited its cargo at Beagle Bay mission. Frank says that being on that truck created a bond lasting for the rest of these kids’ lives. He names them – “like a roll call of people who went to war together”.

Starting all over again as a child who needed to belong, Frank found that the missionaries had strategies: each new arrival was assigned a mate; food was plentiful; and work and worship were for everyone. Beagle Bay was like a little town, staffed by German priests and brothers, Irish nuns and native sisters. School gave Frank a sense of order and progression, and routines such as sitting each day with the same kids in the dining room were a source of security. With food came the nuns’ lessons in table manners, and Frank was pleased to show Coughlan and Waterford that he had them still.

Some kids who grew up at Beagle Bay married there and made it their home, in a section of the mission known as “the colony”; they then put their own kids in the dormitory. To go through baptism and then confirmation enabled Frank to reconsider the significance of his own name: Frank Francis Joseph Byrne. “I liked Francis because he talked to animals and Joseph because he grew up Jesus like he was his own son.”

Boys such as Frank could be altar boys and choristers. As well – in another part of the week – these adepts in the Latin mass could be donkey jockeys. No donkey at the mission went without a name, and Frank’s affection for them continues. He imagines the descendants of the beasts he worked and played with, now roaming wild on the Dampier Peninsula, “singing their own songs. It’s their country now.”

At Beagle Bay the church seems to have succeeded in building a community to replace an Aboriginal society that many intrusions had white-anted. Under clerical patronage long-term residents “became our family”, and to some of them Frank was indeed related, though he did not know it then, as “no-one was there who could help us work these things out”.

With Frank Byrne’s help, I better understand the observation made by Kimberley psychiatrist Ernest Hunter (in his Aboriginal health and history, Melbourne: Cambridge University Press, 1993) that the deliberate winding back of church authority in the 1970s was experienced by many in the Kimberley as a hurtful withdrawal of paternal and maternal care. That care had ameliorated a foundational sadness to which Frank’s story occasionally returns.

How to leave such a place? Frank exited the mission when the priests told him as a fifteen year old that he no longer had to be in school. He recalls handing over his donkey Bluey to another boy, but he cannot recall whether he said good-bye to all who had become his “family”. He muses that acquiring this capacity for separation is perhaps what “survival” amounted to: “we were attached to those people, we loved them, but we had to be strong in ourself”.

That strength shows in the calm, observational manner of Frank’s recollected boyhood. The reader experiences the possibility that a hurt child can remain open to affection and find companions, human and animal. Stories such as Living in hope are what we can hand on to children, so that their appreciation of the world’s cruelty will be leavened by knowledge of possible recoveries.

Living in hope is a good title, as Frank’s story shows that hope thrives on openness to what is generous and needful in others. This is a memoir of finding things, not just of losing them. I hope it finds a place in the reading of all Australians who are growing up.


Note: Tim Rowse has been writing on Australian Indigenous affairs since the 1980s. His most recent book is Indigenous and Other Australians since 1901, UNSW Press, 2017.

Living in hope won ‘Best Non-fiction’ in the 2018 Territory Read awards. Together with Summary of Small Things by Carol Adams it inaugurated the Inland Writers Series of Ptilotus Press, an independent publisher based in Alice Springs since 1999.