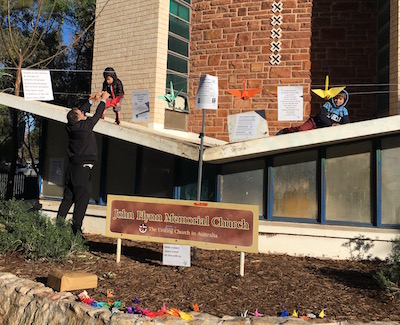 Chris Hawke wanted to mark Hiroshima Day with “a gentle playful space” – for his grandkids as part of their learning about the ways of peace, but also to encourage anybody who doesn’t want nuclear weapons in this world to join in.

“This was to create a platform where people who are from Pine Gap, for example, who don’t support nuclear weapons, or from the defence forces or the federal police or government departments, where they could come and say yes, I support ICAN’s ban* of nuclear weapons.”

As it turned out, just 15 people came to make paper cranes and then stood for a minute’s silence outside the Uniting Church on Todd Mall at the exact time when on 6 August 1945 the world’s first atomic bomb was dropped on Hiroshima. The second was dropped on Nagasaki three days later. The two bombs killed more than 210,000 people in the blasts, the resultant firestorms and radiation effects over the next few months.

Mr Hawke’s grandchildren Eli and Oliver were there, his daughter Anneke and her husband Rohan, his wife Gerda. Most of the others were people he knew.

“Maybe that reflects a weakness of my thinking,” he says.

“It’s one of the questions I ask myself, how do we build a global movement to create a safer world for our children?”

He’s a long time peacemaker. Not a pacifist, he can see valid reasons for nations having a military, but certainly someone who thinks institutional violence should only be used as a last resort and he is ardently against nuclear weapons in any circumstance.

“We’ve seen, globally, that the destructiveness of biological and chemical weapons is too great. We need to do the same with nuclear weapons.”

He reflects on a range of strategies for peacemaking: some people see the way to create change is through conflict, challenging those in power; others say you need to look at your own personal motives; a lot of people say peace starts at home, bring your children up that way – resolve conflict, minimise the use of violence, or avoid it.

This Hiroshima Day remembrance, which he has organised in Alice Springs since 2015,  is one way he can contribute.

How realistic is it to imagine that people working at Pine Gap – called a joint defence facility but in reality a US military base – would be able to attend an event like this? 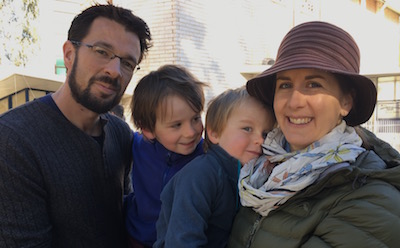 That’s “one of the dilemmas” in our politics, says Mr Hawke.

A close friend of his works at Pine Gap. In 2016 Mr Hawke emailed his network, this friend included, an invitation to the IPAN (Independent and Peaceful Australia Network) conference that was to be held in Alice.

The friend apparently felt he had no choice but to report to his superiors that he’d received the email. He was instructed to block Mr Hawke from his account: “I only found out indirectly through other people – he confirmed it later.”

This is one reason why, he thinks, that there is a polarisation in town, or an outright lack of support for peace actions: “You know the people. It’s easy to challenge someone if you don’t know them, but we’re a small town. I know lots of people who work at Pine Gap and support it. I’m linked with different church communities in which there are key people working at Pine Gap, or their partners or children are.

“All organisations have rules, I accept that, but that experience affected my relationship with this guy. I was really upset, thinking how much more does he tell them about me? My nonviolence principles are quite open, I’m not hiding anything, but I find it really hard that he might be sitting down having a discussion about me with someone out there, someone who’s been given information about me.” 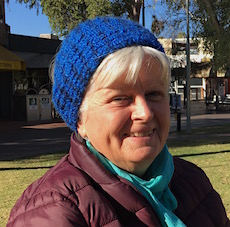 Gerda Hawke (at left) agrees that the presence of Pine Gap limits the debate in town: “People don’t want to offend their friends and neighbours.”

It can be easier for people who don’t live here to speak strongly about it, but on such an important issue “you have to risk upsetting people at times,” she says.

It does inhibit some conversations with people she knows, but “you still need to speak to the concerns you have, without negating the person. It’s not that I don’t like those people, it’s their workplace.”

Resolving conflict, creating peaceful relationships is the essence of what she does in her work as a mediator. These are tools to take into the world: “It’s a pretty old-fashioned way to solve differences, bombing each other to smithereens, and it doesn’t create any lasting peace. Surely we have the capacity to find a different way to do it.”

With parents like this, it’s not surprising to find that their daughter, Anneke Marks, tries to build peaceful, restorative relationships wherever she goes in life, and to understand the damage that conflict does, “especially in this town”.

She is referring here to the “huge generational damage” suffered by Aboriginal people, which can be treated with the same silence or avoidance that is extended to the people who work out at the base.

“We’ve met families from having children. The ones we know well are back in the States, but it’s really hard, these amazing people, really beautiful people working in a place that’s not so beautiful.” 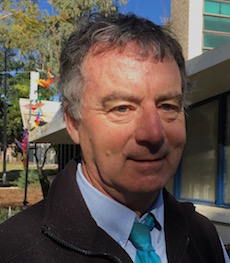 Does she ever try to talk about it?

“It’s all so hush-hush,” the knowledge they have about what the combination of their tasks does seems “so segregated”.

She’s known a couple of people who have chosen to leave their jobs once “they pieced together what they saw on the media and what they knew went on at work”.

She says it’s a hard conversation to have with people who stand to lose their jobs, or face consequences that she’s not sure of. But still, she is troubled by the situation of families she knows “who are trying to raise their kids in a really peaceful way,” while marrying these values with a job at Pine Gap.

Chris Hawke would be a lot happier if Pine Gap was internationalised and its surveillance capacity used to ensure compliance with international treaties making the world a more peaceful place. (The Australian Government often refers to the base’s role in ensuring arms control agreement verification but is totally silent on its involvement in drone warfare.)

“The reality is,” says Mr Hawke, “that huge economic interests are making a lot of money out of fear and war. We need people around the world to realise and develop ways of responding to that. This is one small step.” 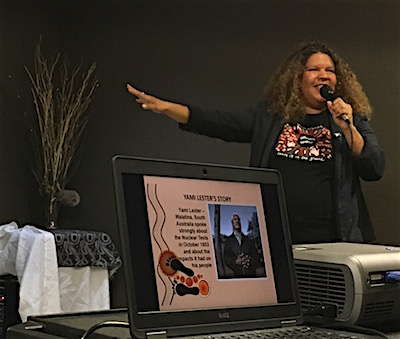 In another measure of the local peace movement, 80 people bought tickets to a Hiroshima Day dinner, organised by the local chapter of IPAN, at which Karina Lester, daughter of the late Yami Lester, was the guest speaker.

Ms Lester together with her sister Rose continue the campaign against the whole nuclear cycle led by their father, whose traditional lands were devastated by the British nuclear tests of the 1950s. Mr Lester is also said to have been blinded by the tests’ infamous “black mist”.

Ms Lester’s campaigning includes her participation in events organised by International Coalition for the Abolition of Nuclear Weapons (ICAN), including a World Nuclear Victims Forum held in the Peace Park at Hiroshima in 2015.


* Mr Hawke is referring to the international Treaty on the Prohibition of Nuclear Weapons, which an overwhelming majority (two-thirds) of the United Nations supports – but not Australia. In July 2017, 122 nations voted to adopt it. This followed long campaigning and intensive negotiations for which the Australian-initiated ICAN (International Campaign [mistakenly referred to earlier as Coalition] for the Abolition of Nuclear Weapons) was recognised with a Nobel Peace Prize. Only New Zealand of the Five Eyes partners (US, UK, Canada, Australia and NZ) voted for it, signed on and just one week ago, on 31 July 2018, ratified it.