Because of eight grandmothers we can

Eight feisty grandmothers pulled no punches when they declared, at yesterday’s rally to end NAIDOC Week, what needs to be on top of the town’s agenda: Out of control kids and NGOs more interested in chasing public money than doing their jobs.

Epitomising the theme of the week, “Because of Her We Can”, they took aim especially at Congress (annual budget $45m) and Tangentyere ($22m), along with what they say are divide and rule policies by the governments, “kidnapping” children and consigning them to inadequate carers rather than supporting a kinship system developed over eons.

Lined up to face a crowd in carnival mood on the council lawns, several of the eight spoke, the others nodding in agreement.

They had recently come back from a trip interstate to link up with what is becoming a national movement for grandmothers.

Christine Palmer said she is “old school and I carry the legacy of old people who were strong in this town, strong in making sure that we advocated and supported one another and spoke with one voice. They led the organisations for us.

“It breaks my heart, I’m lost for words,” said Mrs Palmer, when the legal service is lost and a Top End one “came to work for our mob,” when workers from Ingkerreke are taking over Tagentyere’s functions on town camps where “town campers were working and beautifying their own place,” seeing the Institute for Aboriginal Development empty and Hetti Perkins Hostel now run by a national NGO: “What happened to Aboriginal Hostels?” Mrs Palmer asked.

She said language broadcasts on CAAMA Radio, whose first Aboriginal journalist she was, are reduced and pointing at the Imparja TV studios she asked: “Does anybody know what that word over there means – Imparja? Bet you half of you don’t.”

And as for the Aboriginal organisations: “Everybody wants the Aboriginal clients … for data, for funding. It makes me giddy to know how many there are.”

Later we asked her: Where does the money go?

“That’s what I would like to know,” she replied.

“It breaks my heart that Congress has a lot of white bums I hear are sitting in Aboriginal identified positions.

“It breaks my heart to have our children in the streets when youth services still haven’t got their act together, who’ve been here for more than 30 years.

“There is a big divide and conquer happening. The government are dividing us. They are playing us against one-another. They have the national bodies like AMSANT and SNAICC, to name a couple, who are messing with our kinship system.”

“Stay out of Australian legislation otherwise a genocide will be re-occurring.

“Land councils around the country are working for the governments. The minerals are being dug up and we are being sold out. They speak for our old people. How dare they. They sell off our land. I only wish the Aboriginal people could see the whole picture. Divide and conquer.

“What they say is treat them like animals, because they are animals.”

About the out-of-control problem of children trashing the town, Mrs Palmer said: “Let’s do what our elders did, meet and discuss, challenge, debate. Come out with one voice, for the betterment of our families.

“The kids belong to the streets of Alice Springs,” yet police are picking on them.

The focus should be on family conferences about children facing court, “forcibly removed and taken up to the Don Dale centre in Darwin” in contravention of recommendations from Royal Commission which advocated taking children to their relatives on communities.

“It’s not the stolen generation any more. It’s the kidnapped generation” that will result in the children “not knowing us when they grow up”.

One grandmother said police had dropped off “six or seven kids for the night” at her house, children who were actually in the responsibility of carers, and departmental officials had no idea where the children were. 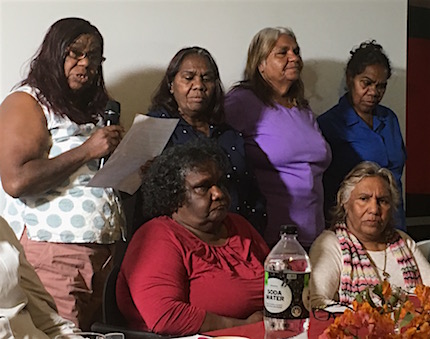 Veronica Lynch read a statement saying the Alice Springs juvenile detention centre is a 10 bed secure facility which is currently operating at 250% over capacity, yet with half the staff positions vacant, pending recruitment.

Left: The Grandmothers Group at a Shut Youth Prisons forum last year, Veronica Lynch on the microphone. Photo from our archive.

On May 24 there were 27 children in the facility: “On a global comparison the Alice Springs youth detention centre makes the list of the top 10 most overcrowded prisons in the world.”

Patricia Ansell Dodds spoke about the troubled kids: “A lot of them are coming from out bush and they are not going to school.

“That’s the fault of the Commonwealth Government for taking all the funding off the communities. Their parents have to bring them into town to get on Centrelink.”

Why are the parents not looking after them while they are in town, we asked her.

“That is a big issue for a lot of Aboriginal nations, not only us here in Alice Springs. I am Arrernte and Mudburra and a lot of these kids come from all around. ”

Sabella Turner told the Alice Springs News Online there need to be consultations between families: “We have to take our children off the streets, I understand that, it’s very important they are taken back to communities.

There needs to be consulting with the grandmothers group, she said.

What will they say to the government? The grandmothers will advise them and do it Aboriginal way, she says.

Why are many parents not looking after their kids?

Brenda Shields: “The grandmothers are doing it. Aboriginal education starts in the home. Then the children go to school, and learn to read and write English.”

Some of the kids obviously don’t have a home they want to go to. During the vandalism on Monday, a really cold night, someone saw a girl aged about 12 barefoot in the street.

But the parents would be with them, wouldn’t they?

Doreen McCormack Carroll: “As grandmothers we’re grouping together to make sure that we’re trying to look after these kids, find a safe place for them. We’ve spoken to [NT Families Minister] Dale Wakefield – we never got anywhere with her at the moment. We are going back to see her again.”

She says the two busses are running till midnight: “Why wasn’t that girl picked up and taken home? That’s what you need on these buses, language speaking people, asking in language, where do you come from? And take them home to their families. No matter if they are coming from bush, there’s are a lot of family here.”

Sometimes the family home is so bad, the kids don’t want to be there, we put to her.

“Well, you don’t know that, have you been to the camp? We don’t know where that 12 year old comes from.”

On one occasion “the police took them kids away, and they said look, there are people drunk in that house, or something, and it’s safer for them to stay up town.

“We understand what’s going on in some places. But not everybody is drunk, has a bad house.”

Is there a case sometimes for taking children away again?

“No, no, no. The thing is you’ve got to give the kids rights. We all brought our kids up. And I’m looking after other children. Just make it right for the kids. Never take anybody’s kids away. You are kidnapping them! I can’t take your kids and put them into my house.

“If they are naughty – everybody’s got a homeland. Big country! If a kid has really hurt someone then apprehend them.”

This week we had 60 kids roaming the streets, in the middle of the night, trashing the town. What needs to be done about them? We put this to Mrs Palmer during the rally.

Pointing at Congress and Tangentyere, she said: “What we need to look at is what the youth services are doing. They’ve been operating over 30 years. What are they doing or not doing?”

What are they not doing that they should be doing?

“They should be out on the street, talking to these kids, not just waiting around for them getting a lift home.

“They need to go out there and start looking what family are out there, get to know who their parents are, follow up the next day.

“They need to follow up each one, each day. Get the kids’ names and follow up with the family. That’s what used to happen in the past.

“Do they operate every night? Or only on Thursday, Friday and Saturday, maybe.

“That shouldn’t have been happening out there,” referring to this week’s disturbances.

Mrs Palmer said the Youth Centre at the foot of Anzac Hill “used to take in black kids as well. We used to mingle. My kids, I used to drop them off and pick them up. That’s not even operating. They are dividing our children as well.”

Is there a case for children to be taken away again?

“No, no! The kids are on remand and they’re sent out there [to the youth prison nicknamed Juvie]. Some kids have gone up to Don Dale. What did the youth workers do? What provoked them to carry on like this? And then it’s put back on the kids. And it’s the kids who get into trouble.”

Mrs Palmer is incensed about Federally funded programs, such as SNAICC and AMSANT, conducting workshops about kinship systems, with Minister Wakefield’s encouragement, she says, when there is extensive knowledge available locally.

“We want our children be placed into a kinship system that already exists.”

Mrs Palmer says some children in government care are consigned to “pop-up houses” and the carers “are on working holidays, some of them”.

She says she asked one carer: “Aren’t you supposed to be at work? And she said, no, the kids are at school, and there she was, smoking dope when she was supposed to be on duty.

“They watch our kids walk out [of the carers’ homes].

“We’ve got Africans looking after our kids. People coming from down south. There are no Aboriginal workers there to work with our kids. We need to put them in.”

Do Aboriginal workers apply for these jobs?

Do you, grandmother, say to the potential Aboriginal candidates for jobs, what are you doing for your people?

Mrs Palmer: “Well, we are going to. We’ve just formed recently. We’ve just come back from a trip to Melbourne, Canberra and Sydney. We haven’t sat down just yet to really work out what we need to do. We meet every fortnight. We need other grandmothers to join us.”

“We have white people come up to us, grandmothers, who want to help us, support us.