Like most Alice Springs residents, I suspect, I have travelled the south Stuart Highway for years without knowing that the Woomera Prohibited Area (WPA) is still a live weapons testing range, open for business.

I’ve noticed the warning signs by the side of the road and thought of them as a chilling relic of a bygone era, when the British conducted nuclear tests at Maralinga and Emu Field.

Not so bygone actually – 1956 to 1963. Those years span a good part of my childhood. Along with people around the world born since the atmospheric testing of nuclear devices – continued by France until 1974, and China until 1980 – I carry the radioactive traces in my body. We all do. This increases the likelihood of us developing cancers.

The area is laden with other sharply tragic stories:

One is about the lasting impact on Aboriginal traditional owners of longterm contamination and exclusion from their lands.

Another is the presence near the Woomera village, between 1999 and 2003, of a notorious immigration detention centre.

There is something so grave and weighty about this legacy that it perhaps explains a deadening of curiosity about the prohibited area and what is happening there today. 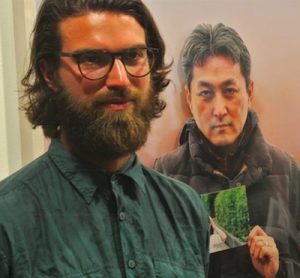 So the first thing I want to acknowledge about the artist Kristian Laemmle-Ruff, whose show Woomera opened at the Araluen Arts Centre yesterday, is his curiosity.

Left: Laemmle-Ruff at Watch This Space for the opening of his 2016 show, Mind the Gap. Photo from our archive.

He’s not quite alone in this as he was able to join a tour, run each year by Friends of the Earth, exploring Australia’s nuclear landscape, which includes Woomera. There he became aware of its contemporary role as an active weapons testing range, the RAAF Woomera Range Complex – at 122,188 km2, the largest in the world.

There is great secrecy, unsurprisingly, surrounding the weapons tested there but one example the ABC uncovered is the British-built Taranis Unmanned Combat Air Vehicle – what is popularly called a drone – designed to carry a payload of guided missiles and bombs. At the time of the test (2013) the British military claimed it would be able to operate the Taranis via satellite link from any location in the world, and, like the US B-2 stealth bombers, it would be able to fly undetected by radar.

Such weapons are used to prosecute the so-called ‘irregular wars’ and extra-judicial assassinations of the 21st Century, with the United States leading the charge post-9/11. To date these conflicts have been highly asymmetric, with operatives administering death from air-conditioned rooms in the West and their victims inevitably in non-Western countries. There is a lot of credible evidence that the victims include civilians, sometimes children, and others who may be identified as combatants (or militants or insurgents) although they are not the specifically intended target.

This information is out there for the gleaning but only sporadically makes the headlines. That might change when weaponised drones get turned against the West, which will happen probably sooner rather than later. 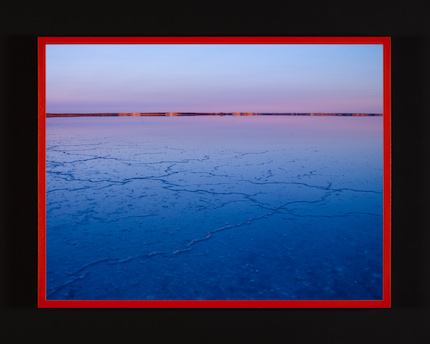 Laemmle-Ruff, having had his eyes opened by the tour, resolved to return to Woomera, to make a creative project that would draw broader attention to what goes on there.

So here I want to acknowledge something else about him, a steady purposefulness and determination to take what he has learned and do something with it.

Back he went with a couple of friends and camped on the shores of Lake Hart.

Again, many of us in Alice will have stopped at this beautiful spot on our journeys south, at least stretched our legs there and perhaps poked around where the rust-coloured sands meet the dazzling salt crust of the lake.

Laemmle-Ruff and his friends went a bit further from the highway, penetrating into the prohibited area’s red zone, exclusively for Defence use year round.

When it came to going deeper into the zone, onto a part of the prohibited area known as Evetts Field, his friends decamped and left him to it. As can be seen from the WPA signs included in the exhibition, being there certainly exposed him to repercussions.

The legislation governing the area is the same Cold War-era Act used to prosecute the Christian peace activists who trespassed at Pine Gap in 2016 (and earlier, in 2005). In case anyone is under the illusion that such acts of trespass, that are without any malicious intent, might be viewed lightly, let me remind readers that the prosecutor called for actual time in gaol to be served by those activists. Fortunately the judge took a more sanguine view.

So another acknowledgement is due, of the audacity and courage, of Laemmle-Ruff and the Peace Pilgrims alike, for their acts of non-violent civil disobedience in a seriously important cause.

I’ll return later to a few thoughts about the cause, but first I want to write about Laemmle-Ruff’s artistic process. He deserves this: the work is not only worthy in intent but in ideas, artistry and execution, which of course means that it will serve his intent all the better.

Apart from the WPA signs, which are their own kind of evidence of the active military functions of the area, there is no ‘smoking gun’ in his images. No weapons or other kinds of war fighting equipment in current use. No explosions. No craters.

They are evoked, with elegant simplicity, by the laser beam. At each intersection is the idea of target and in the imagined aerial space overhead, the idea of all the links – human and machine – in the kill chain.

What is targeted, in the images, is the earth, up close and personal, standing in for us – for without it we would soon be nothing.

Land in the arid zone is often thought of as more or less nothing, as dead and deadly, but Laemmle-Ruff’s imagery connects it deeply with life –  it bears the imprint of other life, the tracks of the emu, and it has its own life, seen in the welling up of moisture making for the circular plaques across its skin. 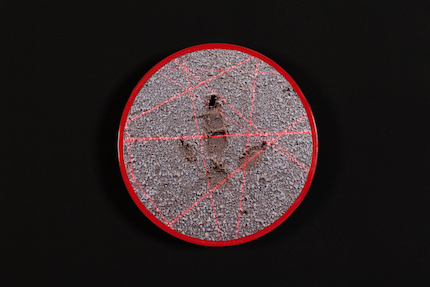 It was fascinating to learn from the artist how these images were achieved. I had imagined the dazzling lake to have been photographed with the sun beating down upon it and the laser beams to have been Photoshopped into the image. Not at all.

The whole of each image has been made in one photographic exposure, taken at night, with the shutter wide open and Laemmle-Ruff running around using flash photography to light the surface and then switching on the laser from different points around the periphery.

And this in a military zone where he had no permission to be!

The circular works suggest a wholeness; the laser tracery evokes the threat of what may yet unfold to break this apart. (Laemmle-Ruff speaks of the circular forms in the desert Aboriginal iconography of place but also of circular shooting targets.)

With Aerial the artist gives us the after view, where the earth survives as a fragment between the harsh explosive lines of the frame, replicating the shapes traced by laser.

These works stand in contrast to his photographs of the landscape in more classical rectangular format. Some of them bear the signs of the area’s military history while others, taken in fairly close vicinity, look like they could be among the most peaceful and beautiful places on earth.

When our governments talk about this area they appreciate it for its remoteness and “quiet electromagnetic environment”, two factors contributing to its eminent suitability for weapons testing, as well as for being highly prospective in mineral wealth.

Laemmle-Ruff’s landscapes pose the question: Are there other ways of thinking about this country, of appreciating it, caring for it? And they also make a statement of what we stand to lose.

I return now to the cause that Laemmle-Ruff shares, in many ways, with the Pine Gap Peace Pilgrims: their challenge to Australia’s creeping militarism. I say ‘creeping’ not only because it is significantly expanding, as we march in lock step with the United States, following them into their perpetual war against terror, and welcoming with open arms the build-up of their military bases on our soil. I say ‘creeping’ also because of the silence that mostly surrounds these developments. 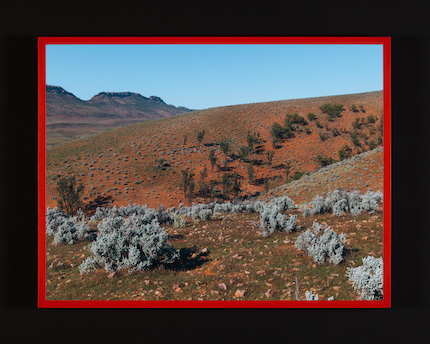 With the exception of a few lone voices our parliament has been utterly docile on the issues, preferring to see the task of examining them taken on by think tanks and the likes of the Williams Foundation, which is sponsored by the big weapons manufacturers, such as  Raytheon, Northrop Grumman, Lockheed Martin, and General Atomics.

(The loss of former Senator Scott Ludlum to the parliament  significantly weakens its accountability in this area – see him at work in Senate Estimates here, where the answers he gets would be laughable were the subjects not all so serious.

(Submissions to a 2015 Senate inquiry canvass some of the issues. The government response to the inquiry’s  recommendation regarding Australia’s obligations under the law of armed conflict and international humanitarian law does not seem to recognise the specific ethical and international law issues raised [see for example Submission 5 by Dr Christian Enemark]  by the use of armed drones in contrast to conventional manned weapons systems.)

Australian participation in drone warfare, as far as I have been able to find out, has not yet been the subject of debate in the parliament as to its ethics and its implications for us in relation to international law. When asked by media, Defence Minister Marise Payne, even as we prepare to buy our own weaponised drones, simply makes reassuring generalised statements, that humans are involved as the remote pilots, and that Australia will always consider its legal and ethical obligations.

We now have not just a Defence Minister but a Minister for Defence Industry (the enthusiastic Christopher Pyne) and the Turnbull government, to no great controversy, earlier this year unveiled a new “defence export strategy” aiming to make Australia one of the world’s top 10 weapons exporters within the next decade. The strongest critics of the plans came not from within the parliament but from the aid organisations, like World Vision and Save the Children.

This a big topic and this response to Laemmle-Ruff’s work is not the place to go into it further, except to say that in the relative Australian silence around our growing militarism, this exhibition becomes even more important. This is not just because of its subject matter but because Laemmle-Ruff engages our imaginations, leaving us with lasting visual impressions and their urgent invitation to think about what is it stake.


Woomera shows at Araluen until 19 August.  I commend Araluen for hosting this risk-taking, thought-provoking exhibition.