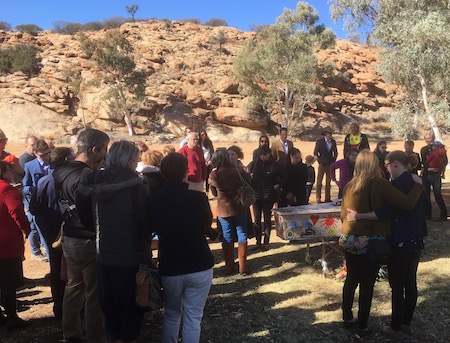 A man who found in Alice Springs fulfilment of his love for nature, of his devotion to competitive orienteering on foot and on a mountain bike, and a place, in partnership with his wife and fellow scientist Catherine Vero, to practice their profession on a national and international scale, died from cancer on Sunday.

This morning family, friends and dozens of mountain bikers gathered to celebrate his rich life under the brilliantly blue sky, facing that rocky hill opposite the Telegraph Station, which Andrea Martin, one of the friends paying tribute, described as a place where “thousands of generations of people lived and loved and died here, and gathered to mourn and celebrate people who have passed away, with song and dance and stories”.

The stories told there today about Paul Darvodelsky – chemical engineer, expert in sewerage systems, owner of the Alice Springs Cinemas, fan of fast and big cars (“he once had a car bigger than my first apartment,” according to his brother Mark) – were of love, ambition, generosity, courage and fun that filled the 56 years of his life, the last eight of them in Central Australia.

“Don’t be mean and don’t do stupid things” was his life’s philosophy, Ms Vero told the people gathered.

And “life works better if we all look after each other,” added a friend, recalling his generous mentoring of her: “It was important to Paul that I was the best person I could and wanted to be. With his support and guidance I have become braver, a better communicator, more assertive, more loving, better expressing my love of community – and also a lot fitter.”

His wife, whom he “met and wooed on top of a sewage tank in Wagga,” according to a quip from brother Mark, quoted Paul: “Joy is a timid creature. Leave space in your life for joy and it will come out to play.” 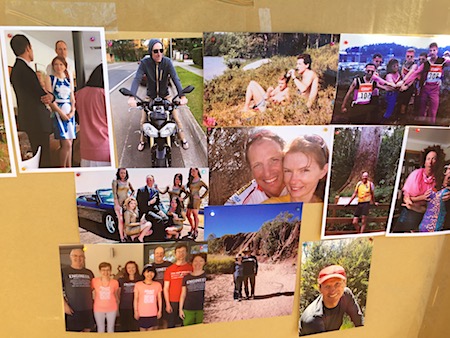 Paul wasn’t doing things by halves – a candle burning twice as bright burns only half as long, as one speaker put it.

His sports were more than a pastime – he successfully represented Australia overseas.

He didn’t just enjoy orienteering – he became a founding member of the Big Foot Orienteering Club at Sydney University.

He didn’t just like films – he bought the Alice Springs Cinemas and fitted them with leading-edge digital projection equipment. Locally made “Sweet Country” premiered there, for example.

Attracted to the region in part by its mountain biking potential, he was instrumental in starting Easter in Alice that now brings hundreds of competitors to The Centre from around the nation.

“Paul seemed to instinctively get that while we are all busy doing and trying to win at life, the most important thing is to cherish the beautiful simplicity of just being,” reminisced a friend.

“Paul was very excited when he got his first real engineering job. And the first thing he did was to calculate how long it would take him to earn enough money to buy a Mars Bar. Then he bought himself a Mars Bar. So simple – and so cool.”

Alex Darvodelsky said he has to confess that his brother’s deep fondness for The Centre had infected him as well, “and I find myself wanting to come back here almost as soon as I get back to Sydney”.

He recalled: “Paul had a very enlightened perspective on his illness. Only a few months ago we went for a mountain bike ride, and we stopped in a nice spot, out in the desert, and he said to me in some ways he was grateful that he has cancer, because it really helped him to focus on what was most important in his life: His love for Cath, and his family, and his Alice Springs family who are here today.

“He absolutely loved it here, and it just fed his soul in a way that no other place could.”