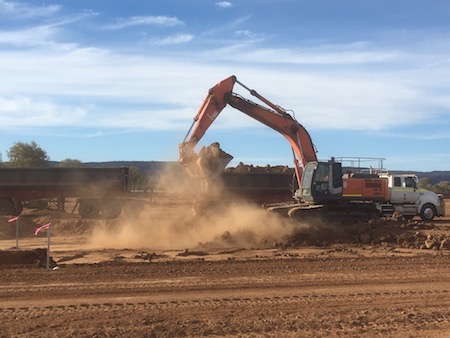 A stop-work order was imposed on Monday last week and lifted on Thursday on the site south of the Kilgariff suburb where a channel is being built, directing water away from the Stuart Highway and Col Rose Drive and into St Mary’s Creek.

Aaron Blacker, manager of ASPLUM & CIVIL, which is doing the work, says people not known to him had claimed that unapproved subdivision work had started, and that trees had been brought down outside the “limit of works”. There had also been complaints about dust.

He says the work is being done under an exceptional development approval for drainage work, not subdivision, and no work had been done outside the set limits.

“We are not in breach of the contract,” says Mr Blacker. “Our work has been checked stringently, including by the Environment Protection Authority.”

We asked the Department of Planning, Infrastructure and Logistics for a comment at 1:55pm yesterday but have not yet received a reply.