When a long lunch is a good thing 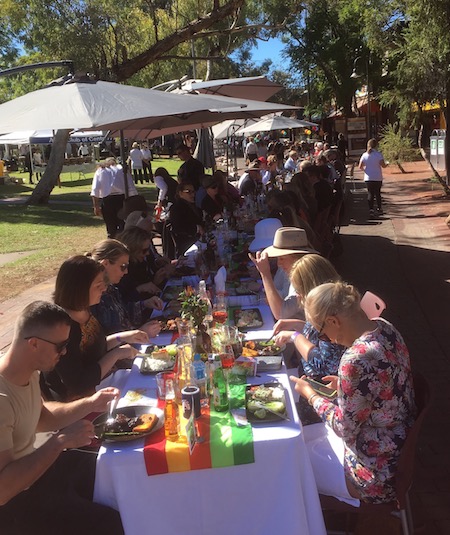 The Mall worked its magic yesterday when 145 people sat down for a very long lunch under a brilliant blue sky and a temperature that could not be more perfect: parades, markets and special functions, our main drag is in the heart of the town, and on these occasions is in the heart of its people.

And it all comes together when the community, through its volunteers, takes charge.

Yesterday’s lunch – $120 a head – raised money for the Hamilton Downs Youth Camp, a bit over an hour north-west of Alice Springs.

It was a cattle station in the 1800s and consists of five heritage-listed buildings, constructed between 1910 and 1923. To their south are the splendid MacDonnell Ranges, glowing orange when the sun rises and sets.

The homestead is now managed by a volunteer committee. In 1976 it became a service project for the Rotary Clubs of Alice Springs and Stuart, Kiwanis, Junior Chamber of Commerce and Lions, with Apex as the convenor.

The Youth Camp, available for hire by any group, now has well-serviced accommodation for 66 people plus a camping ground.

Schools and youth groups use the venue about 100 days of the year. These groups have sole use of the venue and facilities. Other special interest and private groups account for about the same number of days a year, says Ren Kelly, the chairman of the camp’s association.

A string of improvements and renovations, including a big solar plant, were funded partly by NT Government and from donations and fundraising. 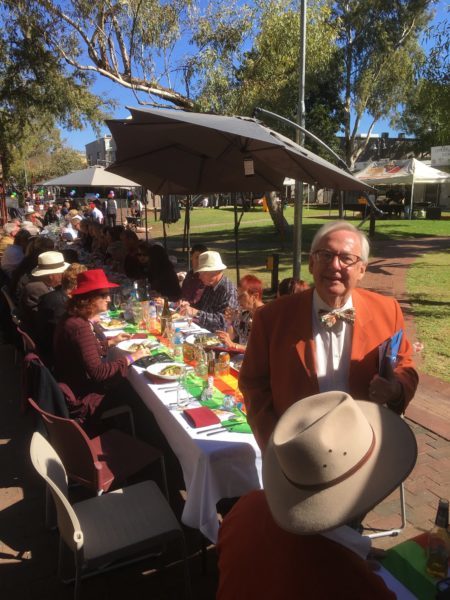 The lunch was an opportunity for seven local restaurants to strut their stuff: slow cooked Angus Scotch served with smashed (whatever happened to mashed?) potatoes and lemon garlic broccolini.

Mr Kelly says the deal with the restaurants is a tightly kept secret but it is a very generous arrangement for Hamilton Downs.

Mr Kelly has an unusually broad background in Territory community affairs. In 1974 he played a key role in Darwin helping to restore communications after Cyclone Tracey all but destroyed the city.

He and wife Joy owned one of the four original hotels at Ayers Rock, the Red Sands, and later the pub at the new Yulara resort, together with a tour operation. Mr Kelly single-handedly forged connections to prime overseas travel agencies. For some time the Kelly duo also managed the Yulara airport.

The pilot dispute and the Ansett collapse were hard knocks and reduced their operation.

For decades Mr Kelly has been the chairman of Radio 8HA.

Now aged 74 he started a very different day job a few years ago, joining the Alice Springs office of the Department of the Prime Minister. 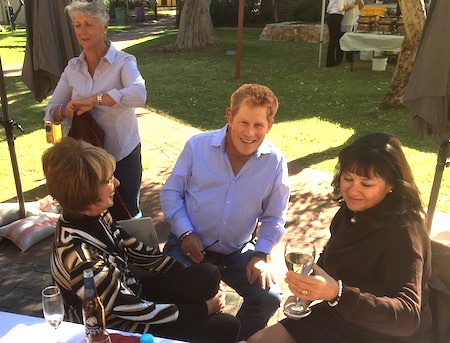 He says from his top floor office he has the best view of the town (albeit from what many believe to be its most ill-fitting building, the Supreme Court).

He is amused about the reaction from visitors passing the revellers at the lunch, wondering how they could join in.

Mr Kelly says he has lobbied Tourism NT repeatedly to promote the function to visitors as well “but they have done absolutely nothing”.

He will not complain about it, but it’s clear the clash yesterday with the Territory Dinner (for people who’ve been in town 25 years or more) was unfortunate and no doubt contributed to a slightly smaller crowd at the lunch – and probably at the dinner as well.

And not much seems to be happening in The Alice these days without the ubiquitous “kids”.

They appeared here and there, watching the lunch from the periphery. One of them snatched a bottle of wine from a table.

A young woman luncher, in a display of startling pace, pursued him and retrieved the bottle.

Later a group milled around a volunteer waiter with the wheelbarrow full of drinks. “Don’t even think of taking one of these,” he was heard to growl. 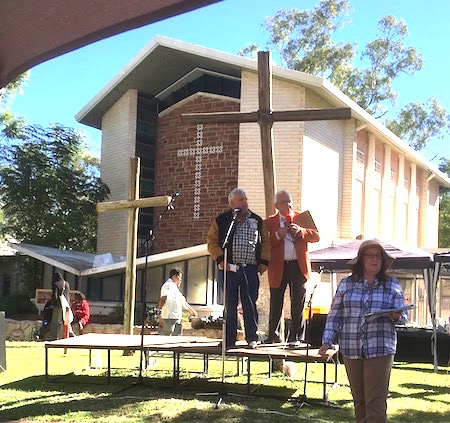 They left. The person in whose care some of them may be was at the lunch: Families Minister Dale Wakefield. Small town.

PHOTOS (from top): Long lunchers in the sun • Mr Kelly with guests • Fake news of a wedding at Westminster Castle notwithstanding, Prince Harry (aka Nick Hill) was actually at the Longest Lunch • The versatility of the Uniting Church lawns was shown when the beef auction took place in front of the Easter crosses. Auctioneer Herbie Neville, assisted by Mr Kelly, knocked down to bidders what must be the most expensive cow in creation: The total paid for the cuts was $6000, including $300 for an undefined number of sausages. It was another example of the lunch crowd’s generosity towards a good cause.