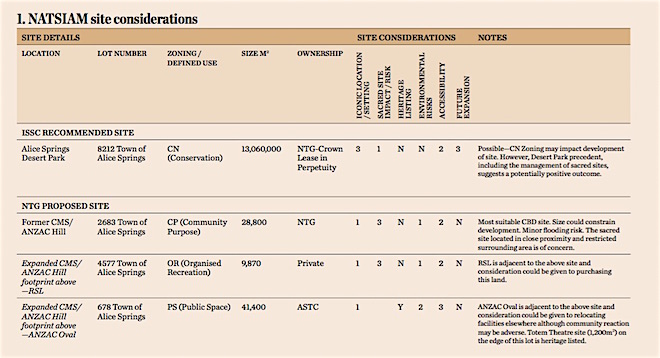 Above: Page 60 of the steering committee’s report clearly recommends only one site for the gallery, the Desert Park.  NATSIAM stands for National Aboriginal and Torres Strait Islander Art Museum, the committee’s preferred name for the project.

To a question from Araluen MLA Robyn Lambley in the Legislative Assembly yesterday he said: “We have gone through two consultation processes—one through the steering committee which put up two sites that were deemed suitable or appropriate for this development—one was outside the CBD proper, out at the Desert Park, and one was in the CBD and that is at the bottom of Anzac Hill.”

Mr Gunner is wrong. The fact is that the steering committee recommended only one site. The Desert Park. The committee’s report clearly states that the Anzac Hill site was proposed by the government: it’s there in black and white in the Appendix on page 60,  reproduced above.

There is no argument put forward in favour  of its location at Anzac Hill. And in the committee’s scoring system for site location, Desert Park scored the highest, 3, and Anzac Hill, the lowest, 1. All other sites the committee considered were designated unsuitable. 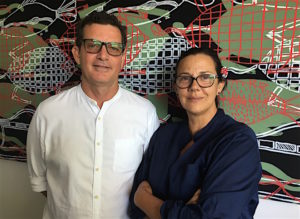 The committee’s arguments for Desert Park included it being “a landmark destination in itself”, and that its “magnificent natural setting will invite a more holistic understanding of the confluence of environmental, cultural and scientific knowledges expressed in contemporary artistic practice by Aboriginal and Torres Strait Islander artists, and distinguish it from any other public museum in Australia.”

On its distance from the town centre, the report notes that the Desert Park is only six kilometres from the centre of town, with walking and cycle paths (connecting it to the CBD). The report provides documentation on visitation to MONA, Hobart’s hugely successful Museum of Old and New Art, which is well outside the centre of the city. It gets 430,000 visitors per annum, 70% of whom are tourists. The report also points to the local example of the Telegraph Station, which is four kilometres from the CBD, and received 243,000 visitors in 2016-17.

He seems to be completely ignorant of statements in an article under Ms Wakefield’s byline published in yesterday’s Advocate. She writes:

“I have spoken to the Chief Minister and have asked to take the lead on finding solutions to these issues so that we can progress this important project for our community. He has agreed.”

Ms Wakefield reiterates the government’s commitment to the Anzac Hill site but recognises that “there is a lot of work to do to gain the confidence of the Alice Springs community and the acceptance of Traditional owners and Custodians.”

Her next step will be to assemble “a team of local people on the ground to engage the community alongside me. Any future decisions we make will be guided by the people of Alice Springs.”

Ms Wakefield’s statement, by the way, does not appear on the government’s media release website and was not distributed to other media.  The Advocate has received tens of thousands of dollars in advertising revenue from the government on this project and has been routinely used to communicate its messages – if not propaganda –  to the exclusion of other media.

Meanwhile, on the Town Council’s rejection of his proposed MOU,  Mr Gunner told Mrs Lambley he is happy for council to “take more time to work through how they handle this process … I thought the memorandum of understanding was a very practical way of dealing with that—having a way that we can formally work together. You do not need an MOU; we work with councils across the Territory all the time without MOUs. It is simply a way of formalising that.”


Alice Springs News Online offered Mr Gunner right of reply. None was to hand at the time of publishing.