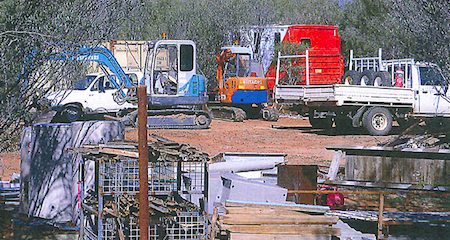 Who would care about the answer to this question?

For a start, all those about to make what is likely to be their life’s biggest investment, in their dream home. About to choose a lifestyle. And who don’t want to be exposed, down the track, to a government instrumentality turning all that upside-down.

No. Talk to people in the rural residential area, south of The Gap, who are seemingly powerless against the creeping industrialisation of their area, zoned for dwellings, not business.

Or talk to MLA for Namatjira Chansey Paech who has declared he will do his best to sort out the mess of confusion, buckpassing and stonewalling.

The issue moved into sharp focus with plumber Steve Zanka and partner Lily Tan making an application for Home Based Contracting (HBC) on a two hectare rural residential block in Petrick Road in 2015.

They also applied for a Home Occupation permission, covering small businesses ranging from sewing to book-keeping.

The Planning Scheme says HBC means “the storage on the site of a dwelling of materials and/or vehicles associated with a business operated by a person resident in the dwelling, but which business does not operate from the site of the dwelling”.

In the Zanka and Tan case this clearly means, for example, Ms Tan could do book-keeping for money and Mr Zanka could store plumbing gear, but they are not permitted to operate the plumbing business from their house in Petrick Road.

Yet that is what they told the DCA they wanted permission for, and what the DCA approved in violation of the Planning Scheme rules.

And so a string of authorities now have their knickers in a firm knot.

Laddawan Te Maro, an officer of the Ombudsman contacted by me, made these assertions in an email: “It should be noted that the Act and the Planning Scheme allows the DCA to make decisions … inconsistent with the Planning Scheme.”

And: “The DCA has the discretion to approve development applications that are inconsistent with the specifics provided in the Planning Scheme.”

I asked the Ombudsman how Ms Te Maro arrived at these conclusions. My question was not answered.

In stark contrast, the chairperson of the DCA, Suzanne Philip, said in a media release on March 23: “The DCA receives regular complaints concerning the creep of inappropriate uses, particularly in the rural areas of Darwin and Alice Springs.

“The DCA believes that compliance with the Planning Scheme and zoning laws is important to Territorians to provide for appropriate and orderly planning and control of the use and development of land”.

My bid to interview Ms Philip got as far as the media minder of the Department of Infrastructure, Planning and Logistics, Ellie Clancy. In yet another example of the Gunner Government’s thuggish dealing with public concerns Ms Clancy stated bluntly: “There will be no phone call organised with Ms Philip.”

Replies from the department simply do not answer the question: Is the DCA permitted to violate Planning Scheme rules?

And the response from Planning Minister Nicole Manison, responsible for the DCA, is ambiguous.

In an interview on March 1, which Ms Manison permitted me to record, we agreed that the question of the legitimacy of the plumbers’ application is best dealt with in two parts, the first being to clarify the ability of the DCA to act in conflict with Planning Scheme requirements.

I put to Ms Manison that if the DCA did not have that power, its decision to grant the approval to Mr Zanka and Ms Tan would need to be overturned.

This would be a warning to the growing number of people misusing their rural residential land for unlawful commercial purposes – with or without consent of the DCA.

None of them pointed to any power for the DCA to act in conflict with the Town Plan or the Planning Scheme.

In fact, the answers seemed to argue the opposite, namely that the DCA must “consider an application in the context of its obligations under the Act … including the provisions of the Planning Scheme” and must take “into account relevant land use definitions [and] the intent of the zone”. (Ms Major’s five points are reproduced in their entirety below.)

Ms Tan and Mr Zanka made no secret of their intentions and despite the clear conflict with the Planning Scheme, and the overwhelming opposition by people lodging submissions (37 were against, five for the application), approval was handed to them on a platter.

“The applicants’ desire to run their small Home Based Contracting plumbing business alongside their place of residence,” was how Mr Zanka and Ms Tan had quite openly put it to the DCA. Note the word “run”.

“The two rooms presently used as offices are situated in an existing shed on the property.

“In the main shed a space … will remain available for use by the business’s HBC activities … and Home Occupation.”

The DCA considering and ultimately approving their application was not the current one, but the one selected by Adam Giles and chaired by former CLP Chief Minister Denis Burke.

It had a remarkable composition: All members were white, male, middle-aged, with business backgrounds and who could be tipped to be vote CLP. (The supplementary member was Mr Paech.)

I know them all, some of them well. As individuals they are fine, upstanding gentlemen. But as a group they make a mockery of the public expectation to be representative of our immensely diverse community.

• I put to Ms Manison that the decision should be overturned if it was in conflict with the Town Plan or the Planning Scheme.

• The Ombudsman parroted the claim by the department that the DCA had done nothing wrong.

• I asked the Ombudsman on what grounds Ms Te Maro had arrived at her conclusions but I received no answer.

• The new DCA chairperson says the DCA is bound by what the Planning Scheme dictates, while the Ombudsman says the opposite is true.

I renewed my requests to the Ombudsman when the new DCA chair Ms Philip issued her media release.

Ombudsman investigation officer Dez Wilde replied to me on May 3, saying firstly that my complaint about “home based consulting” has been “comprehensively addressed” and there was no “new information”.

Mr Wilde wrote: “If you do have some new information or concerns, you need to first forward those in writing to the CEO of the Department of Lands and Planning, to respond to.”

What was new at that time was Ms Philip’s apparent contradiction of Ms Te Maro’s conclusions.

Mr Wilde did not explain why I should be raising with the planning department’s CEO an apparent error by a colleague of his in the Office of the Ombudsman.

Mr Wilde emailed: “Respectfully, this office won’t be reconsidering previous assessments, determinations, and any further inquiries on this issue.”

That seems to say, even if Ms Te Maro’s conclusions were wrong, the Ombudsman’s door is shut in our face.

So right now, all the Gunner Government’s people are offering is this: “We suggest you seek legal advice” (Mr Wilde) and “there is always the option to seek judicial review through the Supreme Court” (Ms Major).

Ms Major, in her reply to me, said the government is currently undertaking a “comprehensive review of the NT planning system” part of which “includes an analysis of the appeal rights provided to residents (including third parties) in relation to decisions of the DCA”.

She says a discussion paper titled “Building Confidence through Better Planning for the Northern Territory” has been released.

“The next stage of the planning reform process will include further public consultation, and will respond to submissions received as part of this process, with a view to progressing reforms that will restore integrity to the planning system,” Ms Major said.

PHOTO: An image used by objectors to the Petrick Road planning applications.

DECLARATION OF INTEREST: As I have done in all previous reports on these issues, I declare that I am a resident of Petrick Road and an objector to Mr Zanka’s and Ms Tan’s application. Erwin Chlanda, Editor.

• Under section 84 of the Planning Act, the function of the DCA is as the consent authority for the relevant Divisions.

• Section 84 of the Act sets out that the DCA has the powers that are necessary or convenient for, or incidental to, the performance of its functions or the exercise of its powers.

• The consent authority must consider an application in the context of its obligations under the Act, as set out in section 51 (including the provisions of the Planning Scheme, the comments of service authorities and Council and any public submissions).

• The DCA determined the application, taking into consideration the matters listed under section 51 of the Act.  These matters were also covered individually in the Development Assessment Services (DAS) report to the DCA and in the accompanying Technical Assessment (which was publicly available prior to the meeting).

• Under Clause 2.5 of the Planning Scheme, the consent authority “must consider a proposed use or development in its entirety”, taking into account relevant land use definitions, the intent of the zone and the merits of the case particularly in considering the potential impacts on amenity.