Home Issue 3 A bridge too far? A tunnel may be the answer.
Issue 3Volume 25

A bridge too far? A tunnel may be the answer. 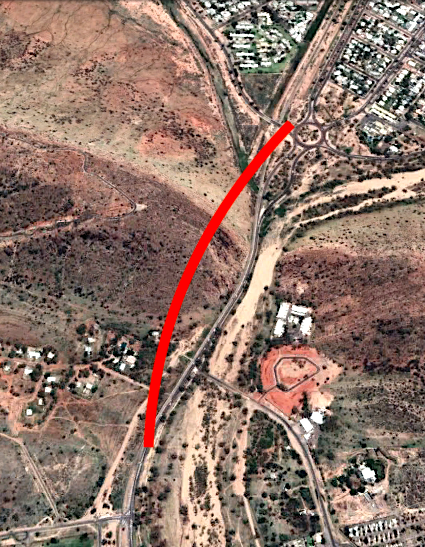 Loss of life and the partial annihilation of the CBD in a big flood, and traffic congestion through The Gap, might be able to be solved with one engineering project: A tunnel through the range (at right).

There would be a third, most significant gain: The Gap, perhaps the town’s most splendid landmark and a key site in many Aboriginal songlines spanning the continent, would be restored to its pristine state.

It would escape the absurd possibility of having a flyover (two images below) put through the middle of it – one of the engineering solutions proposed.

Pie in the sky? Maybe not.

The Heysen Tunnels on the Adelaide to Crafers highway (top of the page), below Eagle on the Hill, a Federal and State Government joint venture, are similar in length, 500 metres. They have three lanes each in two “tubes”. The lanes are each 3.5 meters wide.

And that’s not the only precedent that could work for The Alice, according to the Queensland chairman of the Australasian Tunnel Society, Harry Asche. The other is something similar to the SMART Tunnel in Kuala Lumpur, Malaysia, which is being used for traffic as well as flood mitigation. 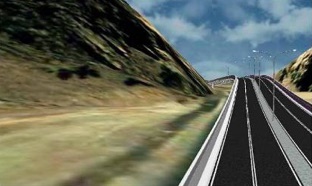 This is how it could work: removing the railway line and the highway – both on elevated mounds – from The Gap would double the width of the creekbed which would logically substantially increase the flow rate of the river.

Secondly, some of its water could be diverted through the tunnel on the exceptionally rare occasion of a major flow, usually over in a few hours.

In such an event Stuart Highway traffic could be diverted through Honeymoon Gap.

The highway would be straightened up south of the range and connect with the present alignment not very far from the northern exit of the tunnel.

Mr Asche spoke with the Alice Springs News Online when we contacted him. He is not willing to speculate about the cost but says the project is technically feasible.

The geology doesn’t seem a problem: The work would be done by a road header (pictured), or where the rocks are too hard, by drilling and blasting. 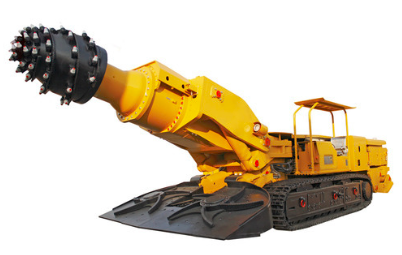 To have two or more “tubes” is an advantage: In the event of a fire or another accident, rescue crews can gain access from either side.

Mr Asche says 24/7 monitoring of accidents needs to be added to the cost of a tunnel.

But here, too, the town has an advantage: The fire and ambulance stations are just a few hundred metres up the road.

• Calculate the increase flow rate with road and rail removed and the tunnels being an extra channel when required.

• Do the figures: There is cost saved for a flood mitigation dam – estimated to cost $30m in 1992 – upstream from the Telegraph Station, regarded by experts so far as the only structure that makes sense. It is symptomatic of the current government that it has done nothing substantial after disbanding a flood mitigation committee, headed by Mayor Damien Ryan, that took a year and a half to recommend a topographical survey of the Todd catchment.

• The other saving would be the cost of additional structures being jammed into The Gap to provide more road lanes.

As for the reaction of Aboriginal traditional owners, it is impossible to predict them, given the contradictory views by various clans about traditional responsibilities for sacred sites in this town.

However, what can be put on the table is this: The women’s sacred site Walyatje Therre, at the proposed dam site, upstream from the town, would remain untouched.

There would be no need for levee banks in town which would scar it, some of its sacred sites, and wouldn’t work in a major flood.

The Gap would have the unsightly rail and road removed and could be enjoyed how it was millennia ago, a major gain for many Indigenous people in The Alice.

And the lives saved by effective flood mitigation are likely to be those of Aboriginal people, several of whom have drowned in past floods.

The Department of Infrastructure, Planning and Logistics said this morning that topographic data for the upper catchment has been obtained and will be used to produce a digital elevation model (DEM).

The department is currently in the process of updating the Alice Springs flood model with the new DEM. Once complete it will better inform government in regards to the viability and effectiveness of potential flood mitigation options. 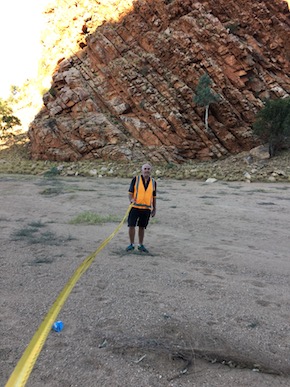 I’ve taken some measurements (that’s me in the photo): The creek bed is 50 metres wide at  its narrowest point.

The railway embankment is 9.2 meters wide, measured from the rock; the footpath 1.8 meters; the highway 9 meters; and the eastern footpath, indulging the slope of the embankment, is 4.5 meters. That’s a total of 24.5 meters which makes Rod Cramer’s statement that the traffic infrastructure takes up “no more than about 30%” of the creek bed pretty close to the mark.

However, add to that the tunnel tubes available for occasional flood water use (14 meters for four road lanes and 6 meters for 2 rail tracks) and you get 20 meters.

Together with the recreated full width of the Todd’s bed, with the traffic infrastructure removed, you get 94.5 meters of flow width compared to 50 now – close to double of the current width.

By GEOFF MIERS The party is over and it's time to get back into the garden before major disasters unfold after rain on nine days...
Read more
Issue 3

A touch of light: the colony

By MIKE GILLAM Photo © Mike Gillam In the late 1980s I visited Watarrka in the George Gill Range, a soon to be gazetted National Park,...
Read more
Issue 1