St Philips College will be entirely powered by the sun at the end of a three phase program starting now, while the Ayers Rock Resort is installing a new solar system which will cover up to 30% of the peak use, or about 15% of its average use.

St Philip’s says it has engaged local company Ogden Power. Stage one, to be completed this month, will provide 25% of the demand, stage two will include more solar panels and a battery will be part of stage three, scheduled for completion in five years.

The 1.8MW system at The Rock is spread across five locations, ranging in size from 100 kilowatts to one megawatt.

The entire array will consist of 5,770 modules, each of which measure 1.6 meters by one meter. The modules are made of glass, aluminium and silicon solar cells, says Voyages CEO Andrew Williams.

“There couldn’t be a better location for a solar field harnessing the energy of the sun than in the heart of Australia’s Red Centre.” 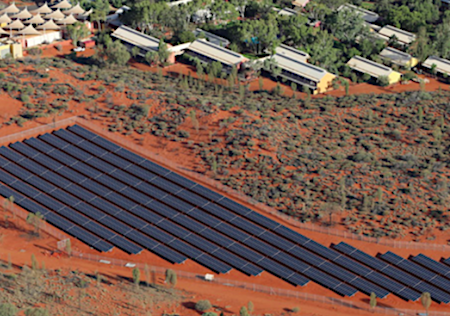 Epuron will provide the solar energy supply under a lease agreement with Voyages.

While the Resort will be involved in the day-to-day operations, Epuron will oversee the maintenance of the installed solar panels, says Mr Williams.