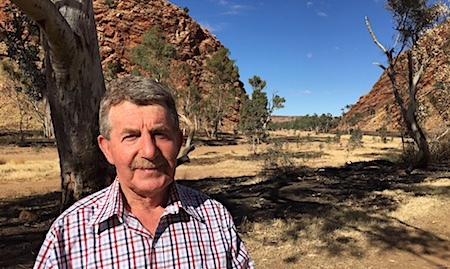 Half the elected members of the Alice Springs Town Council (Satour, Melky, Paterson and Auricht – at right) declined an invitation by Chief Minister’s Chief of Staff, Alf Leonardi, for a one-on-one meeting about the National Indigenous Art Gallery in Alice Springs.

Mayor Ryan, Deputy Mayor de Brenni, and councillors Banks and Price didn’t respond to our email survey and we couldn’t reach them by phone. (We’ll update when possible.)

Cr Cocking says he met with Mr Leonardi and MLA for Braitling Dale Wakefield but used his time to “hear how the government got to this point” and how it can be avoided in the future “that the council is last to hear”.

He says he’s been “site agnostic” from the beginning, and will remain so until “I hear the Aranda voices” on the subject.

Head of the environmental lobby ALEC for 10 years now, Cr Cocking (at left) says he is conscious of the need to revitalise the CBD, but that must not be at the cost of the gallery. The process so far had “not been ideal”.

Although Cr Auricht declined the one-on-one with Mr Leonardi, he says he ended up having one: He went to the Chief Minister’s office to personally submit his apologies, but Mr Leonardi and Ms Wakefield were there.

Cr Auricht says he had a wide-ranging conversation with them about Hermannsburg, its art movement and other issues, but he carefully excluded talking about the art gallery and its location.

“I did not want to be singled out,” he said.

The council met as a group with Mr Leonardi.