New abattoir for Alice? Some cattle men pushing for it. 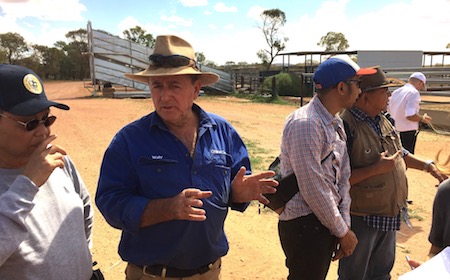 Fear that bad seasons would interrupt the supply of cattle is one of the main obstacles to a new abattoir in Alice Springs, says Wally Klein, whose family owns Orange Creek Station.

But he also says: “I think we can source them out from a bit further to cover that.

“Even when we have a really dry year I can go out bush and get a fat cow, a fat killer. Beautiful meat.”

Mr Klein also says there is a big future for “green” cattle, free ranging for most of their lives in bush paddocks.

“Yes, we’d like to go organic. There is a huge call for it now. People want to eat good food.”

The Alice Springs meat works at the western end of Smith Street burned down in 1988 and ever since, the parts of the beast that cannot be used – intestines, head, hooves, bones, making up roughly half the animal’s weight – has been adding to the freight bill for meat exported from The Centre.

Mr Klein is a passionate advocate of controlling the whole “from the paddock to the plate” process, having last year built fattening-up yards for his own cattle – big enough for half of his herd of 4000.

He says there is talk of building a small abattoir at the Bohning stockyards immediately south of Alice Springs, and he is planning a slaughter house on Orange Creek.

He concedes that “labour has always been a problem, to get good [abattoir] workers up here”.

And then there is competition from the lucrative live export market: “Little bulls fetch $1000 in Saudi Arabia,” he says, $3.50 per kilo, on the station, live weight.

This is mostly for British breeds, shipped out through Perth or Adelaide, 12 months old, weighing 300 kilos.

Meanwhile Tom Stockwell, retiring president of the NT Cattlemen’s Association, presented a broad overview of the industry at the organisation’s annual meeting on Friday.

“With every increase in wood comes a rapid decrease in grass.

“Woody sequestration [of CO2] and pastoralism are competing enterprises,” he said.

Mr Stockwell quoted in his speech Queensland biologist and research scientist Dr Bill Burrows: “Australia needs to proudly proclaim to the world that it is most likely to reach the holy grail of greenhouse gas reduction by achieving zero net emissions.

“This comes about by virtue of our huge vegetated land mass coupled with relatively small human population. Yet we appear to be embarrassed by this good fortune. It is time for the self-flagellation and misleading grandstanding on this issue, by all Australian governments, to stop.”

Said Mr Stockwell: “I think that the attempts of the Environmental Defender’s Office to stymie and delay clearing on pastoral land in the Territory, that has already been through a fairly rigorous approval process seems a bit frivolous.” 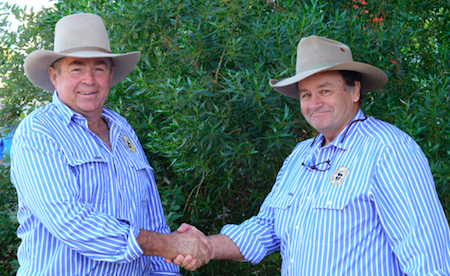 Even at home climate change initiatives are not without problems: “We have some bright, young and idealistic kids at home, studying agriculture, are good at maths and physics. They come up with all sorts of ideas, as they do.

“They reckon we should make all bores at home solar, and pointed out how cheap solar was.

“But they spoiled it all for me as they checked the monitoring app on their phone. They said they’re guessing I’d still have to run the generator 24/7 as a back-up, in case it got cloudy or the sun went down over night.”

Mr Stockwell expects the majority of the fracking inquiry recommendations will be accepted and it is “offering real consultation with all Territorians”.

There had been generally positive responses to NTCA submissions from businesses, communities and others, but “there is still much to do to ensure land access agreements are developed and legislated”.

About “the headlines of recent weeks” Mr Stokwell said: “Despite the good will, the money, the lands, the rights a significant proportion of our Aboriginal community continues to be sucked into the vortex of despair.

“Our industry is maligned” – but he quotes Sir John Kerr: “It seems to the pastoralists it would be a nonsense to say that [Aborigines] would be better off, unemployed in their thousands but maintained in settlements in growing degrees of comfort, when they could work in the real world with growing degrees of efficiency and growing economic reward.”

Said Mr Stockwell: “These days the settlements are in growing degrees of discomfort. I am concerned for all Territorians at the continued concentration of rights and acquisition of power rather than quality of life.”

He quoted the Northern Land Council calling for “the de-colonialisation of northern Australia, native title holders becoming landlords of the pastoral estate, wanting seats on the pastoral land boards and the like.

“More worrying is the NT Government response to this bullying approach,” referring to the Barunga treaty talks.

He says Aboriginal demands for land ownership have been recognised by land rights, initially expected to see a transfer of 25% of NT land but now amounting to 48%.

“If claims go through it will 92% or so … what further erosion of pastoral property rights will be sold off with it?” he asked.

“How much investment is it going to scare away? What chance of making any substantive difference of normal Aboriginal people.

“In spite of good will, land, money and rights Aboriginal Territorians have benefitted little.

“The NT pastoral estate has been in the forefront of transferring land and rights to Aboriginal people.

“After 40 years it’s time for Aboriginal lands to take responsibility for improving the lot of Aboriginals in the NT, rather than seeking more rights and control over the pastoral estate. History will not judge us well if we don’t change.”

However, up to 300 young Aborigines have been trained in the NTCA ILC Real Jobs program “and this year’s intake was oversubscribed” but “the 48% [which is the Territory’s] Aboriginal land is still a net sink for billions of dollars of tax money”.

Mr Stockwell said the annual Top End monsoonal rainfall amounts to 400 million megalitres, 720 Sydney Harbours: “Surely we can have water as a competitive advantage rather than a scarce commodity.

“Our water resources everywhere need to be protected if any oil or gas development eventuates.”

On electricity: “Despite varied and abundant energy sources we have legislated to have some of the most expensive [electrical] power in the world … which reduces our competitiveness globally.

“The northern beef industry has borne the cost of Australia’s commitment to the Kyoto Protocol but we now know we have a positive sequestration story to tell” which should allow “sensible land clearing”.

The association has elected Christopher Nott (at left in the photo) from Alcoota Station in Central Australia as its 13th president. He is pictured with outgoing president Tim Stockwell. (NTCA photo.)

OTHER PHOTOS (from top): The remains of the old Alice abattoir • Mr Klein with Indonesian cattle buyers • Cattle yards on Orange Creek.