Home Issue 2 Jacinta Price: talking about Aboriginal people but not for them?
Issue 2Issue 3Volume 25

Jacinta Price: talking about Aboriginal people but not for them?


There was a significant cross-over of themes but almost no cross-over of people at two gatherings on the Town Council lawns last week: the first was a delayed celebration of International Women’s Day, the second was a rally called by Jacinta Price.

Protection of children was a strong theme of the first, while it was the sole focus of the second.

Neither gathering drew what you would call a crowd (although attendance at the IWD event grew over the lunch hour, after our photos were taken). But it is fair to say that numbers were greater and certainly many more Aboriginal people attended the first occasion than the second. 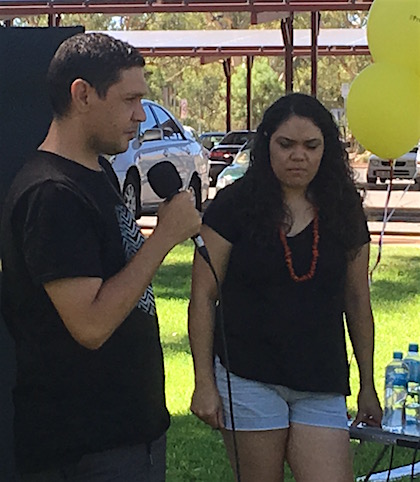 Apart from family members and local man Mark Lockyer (at left), who applauds Ms Price’s outspokenness, there were few Aboriginal people at her rally. Most others attending were associated with the CLP. Colleagues from the Town Council were also there – Damien Ryan, Marli Banks and Eli Melky – and so were some of Ms Price’s musical collaborators.

Why does this matter?  Because it adds to a picture of division between Ms Price and the Aboriginal people she is speaking about but apparently not for, or even with and to.

This division has been made explicit in recent months, with the circulation of a petition on change.org challenging Ms Price’s status as a leader of the Aboriginal community, and subsequently with a statement to the Alice Springs Town Council from the Arrernte and Central Australian Aboriginal Strong Women’s Group. While that statement did not name Ms Price specifically, it was clearly a challenge to assumptions about her leadership being made on the basis of her growing national profile.

Ms Price makes a strong argument about taking race out of the discussion of child safety, but her remarks, often on a national stage, are aimed squarely at Central Australian Aboriginal communities.

Her rally in Alice Springs was linked specifically to the alleged rape of a two-year-old girl in Tennant Creek and at what she says is silence around the event amongst Aboriginal people, including Aboriginal leaders and politicians.

Yet she would have to acknowledge that people in Tennant Creek, including family members and Aboriginal leaders in that town, have expressed their anguish publicly and have been self-critical, while at the same time angry over failings of government and agencies.

The Alice Springs News Online put this to her after the rally: “Absolutely!” Ms Price agreed. “They’ve said we need to take responsibility, yes, they have, and I hope the Tennant Creek community can inspire other communities to do the same thing.”

The News also put to her that her campaign on the issue seems to have divided her from the Aboriginal community, despite her own urging at the rally that this is an “issue that we have to come together on, not be divided on. Our children rely on us as adults to do that, to come together on this issue.

“I’ve got a lot of support from the Aboriginal community,” she told the News. “There are a lot of Aboriginal people who are still fearful of standing up [to speak on the issue].” 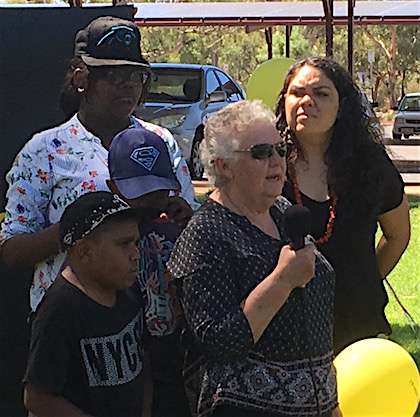 Ms Price wept at the rally when relating the ravages of alcohol within her own extended family and the impact it has had on her young relations, some of whom are being fostered by a white woman, Marian Shelley (at left with her foster children), who is obviously close to and immensely appreciated by Ms Price and her family.

Nobody would doubt Ms Price’s strength of feeling and concern about this situation but her speech and other speeches at the rally were often marked by generalisations.

An historical seven-month-old victim of rape who ended up dying from his or her injuries became the grounds for asserting that this “sort of thing” happens “on a regular basis” and is denied and covered up because the children are Aboriginal.

Both Ms Price and her father Dave Price argued this, drawing on communications they have had with a former paediatrician at the Alice Springs Hospital. There was no date given for the historical incident cited; no other specific incidents were described or numbers of incidents given.

One such incident is one too many, of course, and who could not be appalled, but it is a jump to say, without careful substantiation, that such incidents occur regularly.

The focus of the Little Children Are Sacred report, the subsequent Federal Intervention (whatever criticism might be levelled at it), the recent outcry over what occurred in Tennant Creek and the NT Government’s admission of its failings and promises to do better, suggest that Aboriginal and other Australians are willing to both talk about sexual abuse of children and to take action, however imperfect and in need of constant scrutiny and vigilance those intentions are.

Ms Price did not confine her comments to sexual abuse. She also spoke of children being on the streets at night, in particular when it is because they don’t have a safe home to go to. But the highly emotive issue of sexual abuse was the  small rally’s dominant theme.

Holly-ann Martin (below), who runs child protection education programs, spoke about the high STI (sexually transmitted infection) rates in young people under 16 years in the NT, the subject of recent reporting and much commentary nationally.

“People say they’re consenting teenagers,” she said, “A, that is not true, B they’re teenagers. They’re not born with an STI, they have to get it from an adult.” 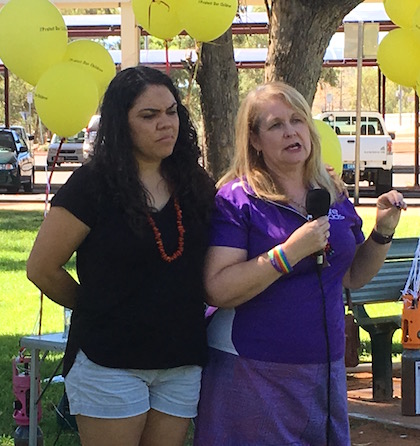 This followed immediately after a reference to “the situation in Tennant Creek”, raising the spectre of child rape.

However, medical authorities say that elevated STI rates, while a matter of serious concern, are not a reliable indication of sexual abuse.
The Aboriginal Medical Services Alliance –NT (AMSANT) recently issued a 10-page fact sheet, reporting and analysing the data.

There are ways other than active sexual relations for STIs to be transmitted. Notifications, based on laboratory tests, “do not distinguish between sexually and non-sexually acquired infections,” says the AMSANT explainer.

“STIs may be acquired during birth or via inadvertent non-sexual contact” such as lack of hand washing, it says.

AMSANT does not deny, obviously, that there may be sexual abuse or exploitation but this will not be indicated by “population level STI information”. It can only be established by careful enquiry into each young person’s circumstances. If “the likely explanation is abuse or exploitation” then it becomes a child protection issue: “Child safety is paramount.”

“For children under 12 there is no increasing trend over the last ten years,” says AMSANT, “and the numbers are very small” – five in 2016.

“For children and young people over 12 there is an increasing trend, concentrated mainly in the 13-19 year age group.

“This is concerning but, on its own, is not evidence of increasing levels of sexual abuse. It is more likely to be a reflection of teenage sexual activity which begins around the same median age for all Australians at 15 years. Obviously, this is a median age and some young people commence earlier.

“Explanations for the increase relate primarily to a broader public health challenge of high prevalence rates of STIs in Aboriginal communities,” says AMSANT.

They relate also to “the failure of Commonwealth and State health authorities to implement an adequate outbreak response in the early stage of the syphilis epidemic affecting northern Australia across Queensland, WA and the NT.”

What to do about the situation is where AMSANT  is on the same page as Ms Price and Ms Martin, urging prevention education programs for parents, children and young people.

Such programs are “critically important”, says AMSANT,  “in raising awareness and understanding of how to prevent child exploitation and harm and how to disclose or make a complaint if their child is harmed or at risk.”

Ms Martin, who operates under the banner Safe4Kids, told the rally that she is almost “a lone operator in this field”. Based in WA,  she has been coming to NT for 10 years – “always invited in”. She has run programs in 22 communities in the Central Desert, including more than 40 sessions with Aboriginal men.

She noted the public funding support for programs on cyber-bullying and the Safe Schools program, but asked where is the support for abuse prevention education and respectful relationships education.

If Ms Price’s agitation helps get more support for prevention programs that would certainly seem to be a good thing. Beyond that, whether her broadbrush blaming and shaming approach itself contributes to prevention is an open question.